The Belgrade’s pantomime this year is that curious mix of Arabian Nights and a China that never was, the rags to riches story of Aladdin.

It’s been a while since I’ve seen a principal boy take the title role – of late it has been the preserve of male soap stars and pop singers, so it is refreshing to see the traditional cross-dressing reinstated. Here, Morna Macpherson is a spirited lead and a likeable hero. As Aladdin’s brother, the lovable buffoon Wishee Washee, Craig Hollingsworth provides the bulk of the comic energy, teaming up with his mother, the flamboyant Widow Twankey – a text book panto dame performance from writer/director Iain Lauchlan.

From the moment the curtain goes up, the stage is a riot of colour, thanks to Cleo Pettitt’s bright costumes with their storybook-Oriental touches.  One quibble I have with the opening, is I’d like the audience participation to kick in earlier.  We need to be addressed and invited in.  Characters need to tell us what’s going on, rather than talking to each other.  But as soon as Wishee Washee comes on, we are well up for it.

Walking on Sunshine is the opening number and Happy is the finale; these two well-known and sing-alongable songs sandwich some unremarkable numbers which, though sung very well, don’t linger in the memory.  As I say, it’s all sung very well – you can’t fault any aspect of the performances but the choice of songs lets it down somewhat.

Overlooking that, this is a traditional, old-school pantomime and oodles of fun for people of all ages.

Arina Li is a beautiful Princess Jasmine (since the Disney cartoon, we shall never again see a Princess Beldroubadour!) with effective support from Joanne Sandi as So-Shi and also the Spirit of the Ring – bringing comedy to the former and an exotic grace to the latter.  Marcquelle Ward is a hunk of a Genie of the Lamp and Aaron Gibson makes a strong impression as a nimble and expressive palace guard.

Relishing his role as Abanazar, Sion Lloyd is delightfully wicked in that way that only panto villains have.  He’s so good at it, you almost want his evil schemes to succeed.

When it comes to William Finkenrath’s Chinese Emperor, complete with comedy accent, I don’t know whether to laugh or be uncomfortable.  In the end, I do both.  It’s a sustained comic performance and undeniably funny but the hackles of my political correctness tell me I shouldn’t be laughing.  But, if we go down that route, we’d no longer have names like Wishee Washee, and the whole thing would unravel.  Finkenrath wins me over by the force of his wit.

With spectacle, slapstick and silliness, the Belgrade’s Aladdin proves you don’t need a host of Big (and Not-so-big) Names to make as enjoyable a pantomime as you could wish for. 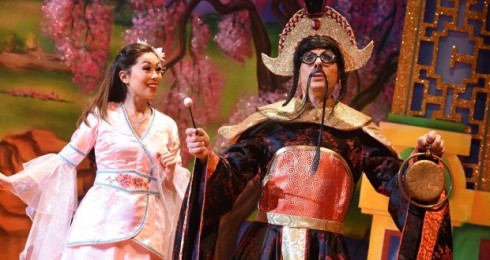