This is the first pantomime of the season for me and it’s a cracker.  Belgrade stalwarts Iain Lauchlan and Craig Hollingsworth return for the umpteenth year on the trot for the rarely staged story of a crafty cat who helps his master to social climb his way to the palace, defeating a terrible ogre along the way.  The pair work superbly as a double act, with Lauchlan as the dame, Matilda Pudding, and Hollingsworth as her son, Simon.   They are also superb on their own, with Hollingsworth in particular working the audience.  His persona is cheeky and easily annoyed; the comic timing is impeccable.  Lauchlan gives a masterclass in panto-damery, with a succession of ridiculous outfits, charming humour and an irrepressible sense of fun.  Lauchlan also writes and directs, and is clearly some kind of genius. 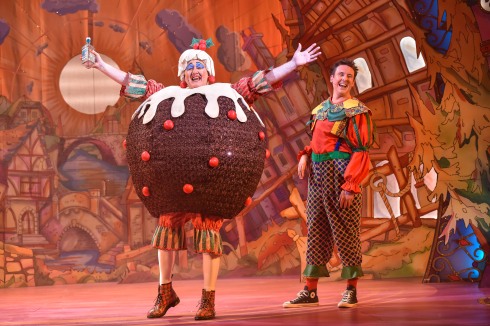 The rest of the cast, for the most part, rise to the standard of the star pair, given the stock limitations of their roles.  Aimee Bevan warms into her duties as our narrator Fairy Flutterby; David Gilbrook is suitably doddery as good King Colin; and Miriam Grace Edwards makes a gutsy Princess Sophia.  As the villain, evil jester Victor Grabitt, Peter Watts is enormous fun, sinister, snide and camp in the melodramatic sense, he is a joy to watch.

The chorus is fleshed out with a troupe of local children, who tackle Jenny Phillips’s choreography with panache.  Among the grown-up dancers, Dylan Jones distinguishes himself with some spectacular urban moves, as well as an engaging sense of humour.  Daniel Teague appears as the Ogre, in a delightfully scary moment – this show has plenty to engage the children and get them shouting and pointing at the stage.

In the title role, Joanna Thorne is dashingly heroic with a lively touch of comedy.  The role is a blend of principal boy and a skin part, but it also lets girls in the audience that females can be proactive.  Thorne has a strong singing voice – it’s a shame we don’t get to hear more of it.

Lauchlan’s script successfully combines traditional routines with bang up-to-date new elements: we are invited to submit ogre-faced selfies to an Instagram account during the interval; Simon Pudding first appears via face-time… Lauchlan thereby upholds the audience expectations of the form, while keeping the form fresh and current, and of course there is plenty of saucy humour to keep the adults laughing.

Non-stop fun from start to finish, this is a refreshing change from the ‘big’ pantos that always do the rounds (the Aladdins, the Cinderellas, the Dicks) and a fantastic way to get into the festive spirit.  As ever, it’s great to see such a diverse audience at the Belgrade, demonstrating that pantomime truly is for everyone and that theatre can bring us together.