This companion piece to the West End hit The Play That Goes Wrong is no less hilarious. We watch with growing marvel and delicious glee as the drama society from ‘Cornley Polytechnic’ plough through their production of the J M Barrie classic.

Most live performances have something that goes wrong – although the audience doesn’t notice most of the time. It’s part and parcel of live theatre: a cue could be missed, a prop might refuse to cooperate… Here, writers Henry Lewis, Jonathan Sayer and Henry Shields, take all those hazards and cram them into a couple of hours of non-stop belly laughs. Scenery collapses, things get stuck or misplaced, and sometimes the sheer incompetence of the actors comes to the fore. Clumsiness and bad luck conspire to wreck the performance. Surprise follows surprise and there are moments of delicious expectation: you know someone’s going to come a cropper; it’s just a matter of time…

Because we know it’s all staged, there is a safe distance at which to enjoy people supposedly incurring terrible injuries. There is something inexorably funny about someone being whacked on the head with a plank. But you sit there thinking how many times can I laugh at this?

Many, many times, it turns out.

The writers are savvy enough to include other factors: the relationships between the actors also add to the catastrophe. There is much to enjoy here along with the relentless slapstick.

Laurence Pears is a hoot as ‘director’ Chris Bean, doubling as Captain Hook and an especially bombastic Mr Darling. His resentment at being treated like a pantomime villain seems heartfelt. ‘Co-director’ Robert (Cornelius Booth) the eldest member of the cast plays Michael, the youngest character. Of course it does – it’s this kind of ‘keep the show going at all costs’ silliness that both rings true and makes you cringe.  Booth also gives an unintelligble pirate whose boat-rowing ‘skills’ have to be seen to be believed.

Leonie Hill’s balletic and melodramatic Wendy overacts and postures, regardless of the demands of the scene. It’s a well-placed parody of the mannered actress, where technique overrides talent. Harry Kershaw’s Mr Smee is an object lesson in lack of stage presence.

Alex Bartram’s Pan battles bravely – not against Hook – but with the technology that is meant to keep him aloft. It’s physical comedy with the added peril of gravity – and there are many good gags involving him crashing into things.

Director Adam Meggido does not let up on the action for a minute. Somehow the chaos prevailing on the stage is choreographed to reach a climax. It’s a dazzling display of skill and focus – never mind the amount of energy expended by the cast.

What emerges is more than a couple of hours of laugh-out-loud fun. Yes, there is the ‘show must go on’ philosophy taken to the extreme, but the show is also a metaphor for the indomitable human spirit. When all around is falling apart, the actors pull through by pursuing their common goal. We should take heart from that whenever the news makes us feel like the world is fast-tracking its way to hell. 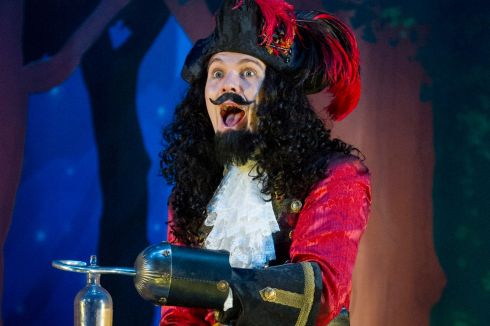