My first Christmas show of the season and it’s a cracker!  The Belgrade may not hire the ‘big’ names on the panto circuit but this is more than compensated for by a traditional show performed by consummate professionals who actually have the necessary skills.

I am pleased to see a revival of the tradition of the principal boy.  Tricia Adele-Turner is a good-natured, honest and upright Dick.  Pantomime, it turns out, was ahead of the game when it comes to gender-blind casting.  Dick’s faithful companion, Tommy the Cat, is the acrobatic and flexible Becky Stone, who manages to inject her singe-word vocabulary with a wide range of expression!  Kelly Agredo is a charming love interest as Alice Fitzwarren, while Declan Wilson offers sterling support as her father Alderman Fitzwarren.  Wilson also appears as the Sultan of Morocco, here more of a Ben Gunn figure in an amusing cameo.  Anna Mitcham is a spirited Fairy Bow Bells, spouting Cockney rhyming slang like a U certificate Danny Dyer.

The driving energy of the show comes from writer/director Iain Lauchlan who also appears as the dame, Sarah the Cook.  Teamed up with Craig Hollingsworth’s Idle Jack, the pair are a force to be reckoned with, handling the audience with apparent ease.  One man is brought onto the stage several times for ritual humiliation – and the rest of us sit back in relief to enjoy his discomfort, except it’s all so good-natured and kind, it is nothing but fun.   This is a panto with a big, generous heart – Lauchlan’s heart, it must be.  He is canny enough to include the traditional elements we expect to see but, as the use of the audience member illustrates, is able to make those traditions fresh.

Whether onstage together or alone, Lauchlan and Hollingsworth exude joy and benevolence.  In total contrast is Melone M’Kenzy as the formidable and imposing Queen Rat.  For me this is the star performance of the show, a villain who is actually villainous.  She is a sassy supermodel, dressed for Halloween and has a rich singing voice that is to die for.  Queen Rat’s henchmen Scratch and Sniff (Matthew Brock and Eden Dominique) are also great value – Lauchlan wisely gives them plenty to do.

The songs are original – I usually prefer pantos to have well-known pop hits and standards – but in this instance, Liz Kitchen’s compositions are great, especially those performed by M’Kenzy.

Mark Walters’s costumes are a visual treat – naturally (if that’s the right word) Sarah the Cook’s outfits are the eyepopping best.  Production values in general are of a high quality and, given the nature of the script and its handling by one of pantomime’s most skilled proponents, pantomime in Coventry is in very safe hands indeed. 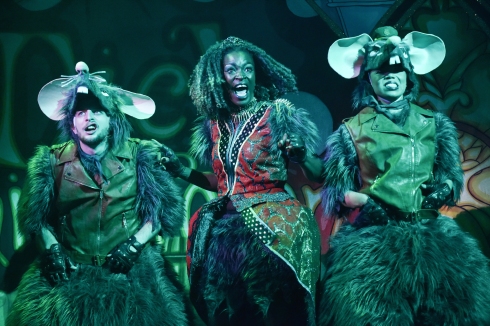