I don’t enjoy tribute bands.  I don’t see the point of them – especially when the original act is still alive and kicking.  Similarly, I am puzzled when episodes from situation comedies are brought to the stage; they never work as well on the boards as they do in the medium for which they were intended.  And when you haven’t got the original cast for whom the roles were tailored, I question the whole enterprise.  You can’t hope to match the brilliance of the original so why try to emulate it?  Why not just bung the DVD on?

But here we are: three episodes of the fourth and final Blackadder series by Ben Elton and Richard Curtis.  Half a box set.  The characters are fully formed – there is no scope for development in a sit-com – so with each half-hour piece, we hit the ground running with little in the way of exposition.  The sit of the com is self-contained and self-perpetuating.

Paul Tomlinson’s Captain Blackadder has the sneering, sardonic tones down pat as he dishes out sarcasm, hyperbole and absurdist similes, but he is disadvantaged by not having a funny face.  Rowan Atkinson’s facial expressions go a long way in selling the often-verbose lines; Tomlinson, sorry to say, is too good-looking!

Nathan Brown’s youthful Baldrick channels Tony Robinson rather well and his comic timing is excellent.  Roger Ganner’s bleating General Melchett is perfectly monstrous in his pigheadedness (bringing to mind the stubbornness of a Brexiteer, wilfully disregarding disaster), he’s an excellent foil for Richard Ball’s nervous wet lettuce Darling.  There are amusing turns from Justin Osborne, enjoying himself as the dastardly Baron von Richtofen, and from director David Mears who goes ‘over the top’ as the bombastic, bullying braggart Lord Flasheart.  How much are they imitating the original cast?  How much is advisable?  Audiences expect the familiar intonations and appearances, I suppose – which is why tribute acts have little to do with creativity and originality.  Tonight, the cast member who seems to make the part his own is Thomas Hodge as posh thicko Lieutenant George.

Mears does well to translate the action to the stage (although sit-coms are somewhat stagey in themselves) making efficient use of a changeable set, built by Martin Tottle and Chris Jackson.  The final images, when the series came to a definite and irrevocable end, made for one of the most powerful scenes of television ever, and Mears makes a good fist of emulating them.  It’s a wrenching change of tone, a sobering moment and a reminder that those who died in this stupid and futile war were more than statistics from a century ago; they were real people, with hopes and dreams, a sense of humour, fears and friendships…  And this is the point of this production and what makes it, in the end, a fine and fitting tribute. 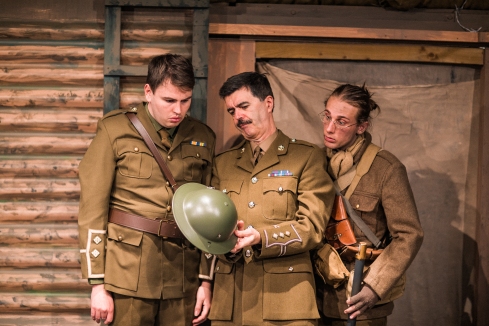 Novelist (Brough & Miller, sci fi, historical fantasy) Theatre critic http://williamstaffordnovelist.wordpress.com/ http://www.amazon.co.uk/-/e/B008AD0YGO and Actor - I can often be found walking the streets of Stratford upon Avon in the guise of the Bard! END_OF_DOCUMENT_TOKEN_TO_BE_REPLACED
This entry was posted on Saturday, November 3rd, 2018 at 8:14 am and tagged with Bear Pit Theatre, Ben Elton, Blackadder Goes Forth, David Mears, Justin Osborne, Paul Tomlinson, review, Richard Ball, Richard Curtis, Roger Ganner, Stratford upon Avon, Thomas Hodge and posted in Review, Theatre Review. You can follow any responses to this entry through the RSS 2.0 feed.
« Strangers’ Things
Fast Love »