When pressed to come up with names from the history of circus, you might recall worthies such as Billy Smart or Mary Chipperfield.  You probably won’t even know of the father of it all, the inventor of the modern circus, one Philip Astley, an innovative impresario and equestrian performer.  Now, this brand-new production staged in his home town brings this unsung hero firmly into the limelight.  We learn that he was a military man who fought in the Seven Years War – the redcoat of his uniform inspires the traditional attire of the ringmaster – and his riding school, based on marshland in Lambeth, like him, was snubbed by the nobility whose patronage he craved.  Dubbed ‘the major with the funny voice’ Astley doesn’t fit in, he’s a solecism made flesh, until inspiration strikes, and he draws together pre-existing elements (horse-riding tricks, clowns, musicians) and invents the standard for the circus ring (still in use today…)

Nicholas Richardson plays Astley as a swaggering, handsome figure.  Beneath the posturing is a man driven by his heart, and his heart is in the right place.  He’s also very, very funny.  He is matched by Danielle Bird as love interest Patty Jones, a spirited, driven young woman who becomes Astley’s rock and life-partner.  Their romance is decidedly unsentimental but is encapsulated in an aerial acrobatic sequence high above the stage and without a safety net, providing one of the truly jaw-dropping moments of the night.

An accident befell the mighty Andrew Pollard, causing him to break his foot the day before the dress rehearsal last week.  A swift piece of re-blocking has him sitting among the audience with his injured extremity raised, as per doctor’s orders, but this is not enough to dampen his performance.  He gives us a range of comic characters via a variety of hats and wigs – his George III is a scream, reminding us of the present Duke of Edinburgh.  Pollard’s marginalisation is only physical; his contribution remains at the heart of this production and it befits his high-status roles (the King, Colonel West) to have them apart from the main action.

Jason Eddy declaims and postures as Astley’s treacherous rival, Charles Hughes, while Nickolia King-N’Da impresses as Astley’s talented but rebellious son, John, who doesn’t wish to be saddled with horse-riding tricks for the rest of his days.  Luke Murphy does a star turn as Billy the Little Military Horse, in a hilarious scene of audience involvement.  Gareth Cassidy is also great fun as Astley’s BFF Alfie, while Oliver Mawdsley lends splendid support as Bert.  The cast is augmented by a quartet of circus performers who tumble and juggle and brandish fire around, bringing the thrills of the circus to this already-entertaining show.

Director Theresa Heskins brings her hallmarks to bear (non-contact combat, letters thrown across the stage…) and they work like a dream.  There is also a wealth of inventiveness that heighten the theatricality of the piece and add to the humour: walking across the marshland, for example; judicious use of ladies’ fans…)  How do you stage trick-riding when you have no horses?  Cleverly, is the answer.

There is also much that is deeply traditional, from the clowning to the carnival barking, but it is married with amusing anachronisms and contemporary references, making this just as much a play of the now as it is of the then.  Co-director Vicki Amedume ensures the action looks and feels like it belongs in a circus.

James Atherton’s original music is suitably circussy and melodramatic, providing the perfect accompaniment to the daring of the acts and the perfect underscore to the twists of Astley’s fortune.   The New Vic Workshop has outdone itself with the props: bicycles converted into fairground horses are wonderful to behold, and Lis Evans’s costumes keep the 18th century to the fore.

I come away having laughed a lot and having been charmed by the story, thrilled by the acts, and above all with a sense of injustice.  Surely Astley, the progenitor of an entire form of popular entertainment, deserves a more permanent monument than this excellent but ephemeral entertainment?

Meanwhile, this is the New Vic doing what it does best, and I cannot recommend this wonderful show highly enough. 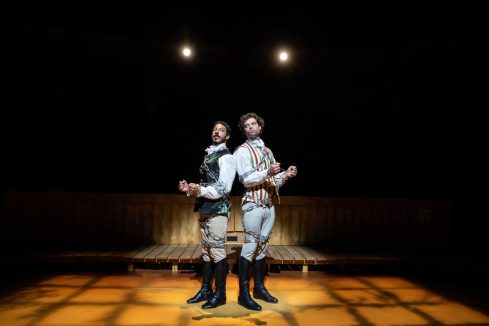