Based on true events, which were subsequently novelised by Compton Mackenzie, this adaptation by Philip Goulding arrives at the New Vic via Oldham Coliseum and Hull Truck Theatre.  It bears the hallmarks of what could potentially be a hilarious show.

Framed as a play-within-a-play, the set-up is a fictional theatre group, the Pallas Players, are to stage the story of two remote islands where a dearth of whisky, due to the War, turns into a glut when a ship carrying thousands of bottles runs aground.  The group is all-female, presumably because in 1943, all the men are off warring. The cast of seven will play all the parts, islanders and outsiders alike, led by Sally Armstrong as Flora Bellerby, our narrator (among other roles). This framing device is a well-worn one.  The hapless troupe in The Play That Goes Wrong springs immediately to mind, and the mighty Oddsocks employ the same convention for all of their productions of Shakespeare and other classics.  Even Brecht uses it, when a load of factory workers present The Caucasian Chalk Circle.  And so, we are on familiar ground.

The performance style is akin to the wildly funny The 39 Steps where a cast of only four do everything.  Perhaps seven is too many to maintain the necessary madcap pace and to keep the sense of heightened theatricality constant.  Larger-than-life characterisations, quick changes and smart ideas for the staging ought to add up to a whole that is funnier than the sum of its parts.  Unfortunately, the overall effect is patchy.  This kind of approach works best with scenes that involve action (Waggett’s car and the cut-out sheep, for example)  Director Mark Babych’s staging ideas amuse but do not blow us away with their inventiveness.  We have seen it all before and in places (such as some of the staged ‘mistakes’) it comes across as a bit tired.

The cast, though, is indefatigable.  There is much to enjoy in the playing: the stuffy posturing of pompous Captain Waggett of the Home Guard (Isabel Ford) brings to mind the likes of Kenneth Connor and Arthur Lowe; Shuna Snow as young Sergeant Major Fred Odd gives a convincing portrayal – you could easily imagine Fred swaggering into the Queen Vic; but the scenes that really come alive are those that feature Christine Mackie as the fierce Mrs Campbell, mother to the timid George (Lila Clements).  Mackie is a real hoot as this formidable woman, keeping to the right side of caricature.  Joey Parsad has her moments as pub landlord Roderick, among other appearances, and Alicia McKenzie is great fun as Waggett’s wife Dolly.  There is a running joke: cast members share the role of the brazen and coquettish Annag, and also that of Paddy the Waggetts’ dog.  There is a lot of coming and going but it needs speeding up in places, and I don’t think the re-blocking of the action for the New Vic’s in-the-round arena always works.

And so, I’m afraid what should be heart-warming and intoxicating as any dram of the good stuff, turns out to be in need of a splash of soda to liven things up. 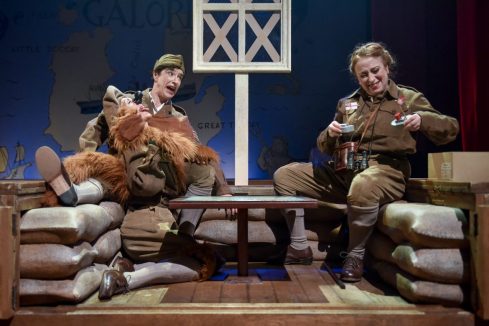