The second night of the REP’s annual festival of European theatre and the enthusiasm for this rich array of work from across the continent shows no sign of waning.  Tonight is a sell-out, in fact.  In your face, Brexiteers!!

First up is THE SENSEMAKER – an absurdist piece from Swiss company, Woman’s Move.  A young woman, smartly dressed, enters.  It’s a job interview situation, perhaps.  A disembodied, automated voice instructs her to wait; we recognise its speech patterns  from so-called ‘customer service’.  An electronic version of Beethoven’s Ode To Joy play on a loop.  The young woman waits and reacts… At last, it’s her turn and she launches into a dazzling display, lip-synching a range of voices in a range of languages, including a clip of Ewan McGregor having a rant in Trainspotting.   She accompanies the words with a tight and repetitive sequence of gestures.  It’s quite hypnotic to behold.  This young woman is an expressive and skilful comedian.  She is put on hold again, then required to clap Yes or No answers to a series of increasingly bizarre and intrusive questions.  Ultimately, inevitably, it all goes wrong, as these interactions often do.  Accessible, relatable, charming and funny, this piece highlights the frustrations of our interactions with technology and the unsatisfactory nature of the dehumanised versions of themselves organisations present to the world.  I loved it.

Next is PORTRAITS AND SHORT STORIES from Panama Pictures from the Netherlands.  A rope, a pole, a trampoline and a couple of ramps form the set for this movement-led piece.  An old man is joined by five younger ones (all beards and man-buns) to populate this playground-like arena and, through dance-movement-acrobatics, interact.  The brochure tells me it’s about family relationships but it strikes me more as a kind of wildlife footage.  We could be watching a pack of graceful primates – the pecking order is there, the shifting dynamics, the bullying, the teaching… They are feral acrobats in their native habitat.  Undoubtedly highly skills and impressive these guys may be, I think a few changes of pace would make the piece more effective overall.  As it is, it didn’t grip me.

Third comes EVERYTHING IS OK a one-man show of ‘cultural and sensory overload’ performed by Marco D’Agostin from Italy.  It begins with an impressive display combining rap, song lyrics, film quotes… For about ten minutes, D’Agostin stands there, delivering this barrage of familiar and unfamiliar lines.  This rapid-fire, polyglottic sequence is like flicking through TV channels.  D’Agostin then changes his approach, devoting the rest of the show to dance, rushing around the space without flagging.  We can spot ‘quotations’ of familiar moves and gestures: a rock star, a disco-dancer, and so on.  At last, he becomes exhausted and collapses.  Basically, he’s making the same point twice.  The dance section goes on for too long, I feel; perhaps he could break it up by combining movement with his astounding verbal outbursts rather than keeping sound and visuals apart – if we are to be truly overloaded.

Finally, the evening is brought to a close by MY COUNTRY IS WHAT THE SEA DOESN’T WANT by Casa Da Esquina from Portugal.  Using verbatim statements from interviews with immigrants and drawing on his own experiences in London, writer-director Ricardo Correia hosts this somewhat disjointed piece but he’s such an affable chap we don’t mind the gear changes.  The show is in turns amusing, enlightening and revealing.  Correia conducts an audience survey to find out where we’re all from, then selects a couple of volunteers to join him on stage for a glass of wine and a chat.  It’s so low-key, it shouldn’t work, but it does, beautifully.  We need more of this: a positive (but not white-washed) slant on migration, before we plunge headlong into the black hole of Brexit and isolationism.

A satisfying and rewarding evening – I wish I could attend the rest of the week – but I wish the organisers would drop the silly system of having to change our cash for play money before we can get a drink.  I know we Brits are supposed to enjoy queuing but once to change cash and again to order a drink is a bit much. 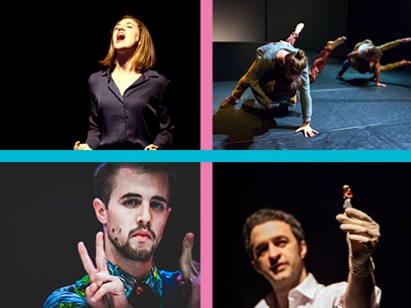 Novelist (Brough & Miller, sci fi, historical fantasy) Theatre critic http://williamstaffordnovelist.wordpress.com/ http://www.amazon.co.uk/-/e/B008AD0YGO and Actor - I can often be found walking the streets of Stratford upon Avon in the guise of the Bard! END_OF_DOCUMENT_TOKEN_TO_BE_REPLACED
This entry was posted on Thursday, July 6th, 2017 at 4:25 pm and tagged with BE Festival 2017, Casa Da Esquina, Everything is OK, Marco D'Agostin, My Country is What the Sea Doesn't Want, Panama Pictures, Portraits and Short Stories, review, Ricardo Correia, The REP Birmingham, The Sensemaker, Woman's Move and posted in Theatre Review. You can follow any responses to this entry through the RSS 2.0 feed.
« Curiosity kills the Dog
Comedy/Tragedy Tonight! »