William Peter Blatty’s novel became one of the most famous and celebrated horror films of the 1970s.  Now, John Pielmeier adapts the book for the stage, giving rise to questions like ‘How are they going to do that?’.  Fans of the film need not worry: all the iconic moments are here.  Director Sean Mathias uses every trick in the book of theatrical tricks to present what we expect to see: rocking beds, projectile vomit – this production really makes heads turn!  And it’s a real showcase for the technical team.  The illusions are designed by Ben Hart and supported by atmospheric, cinematic lighting by Tim Mitchell, who makes use of darkness and chiaroscuro to both hide and reveal what’s going on.  Adam Cork’s sound design surrounds us with eerie noises and disembodied voices.  Anna Fleischle’s set is versatile and evocative – Nick Gingell’s stage management team pull off wonders, changing scenes in pitch blackness so the action can flow from seamlessly from place to place.

Out front a strong cast delivers an engaging script, laced with humour to relieve the tension.  Jenny Seagrove is excellent as Chris, movie star and mum, unravelling as her daughter’s plight worsens.  Clare Louise Connolly is Regan, the child in question, and gives an astonishing performance as the ten-year-old falling prey to evil.  Although she spends much of the show in bed, she must be exhausted by the end!  Adam Garcia’s troubled Father Karras, trying to work through his grief over his late mother, finds redemption – the keynote of the production is that the cast play with earnest.  The material is bunkum – gloriously so – but the actors help us suspend our disbelief and go along for the ride with them.  Peter Bowles is fantastic as the titular exorcist, the ailing Father Merrin, managing to be imperious and vulnerable at the same time.  There is sterling support from Joseph Wilkins’s Father Joe, Mitchell Mullen’s Doctor Klein, and Todd Boyce’s Doctor Strong, a succession of ‘experts’ trying to diagnose what’s wrong with the little girl. Tristram Wymark is good fun as the camp and avuncular film director, Burke, and is party to one of the great shocks of the evening.  There are plenty of moments of grand guignol, to be sure, but what keeps us hooked is the unsettling atmosphere.  Anything might happen and right before our very eyes.  But among all the thrills and frissons, I can’t help thinking the devil doesn’t half sound like Sir Ian McKellan.

A gripping funfair ride of a show – perhaps it’s more frightening if you’re a believer – the production plays the horror movie tropes to great effect.  Wonderful entertainment for a chilly autumn night. 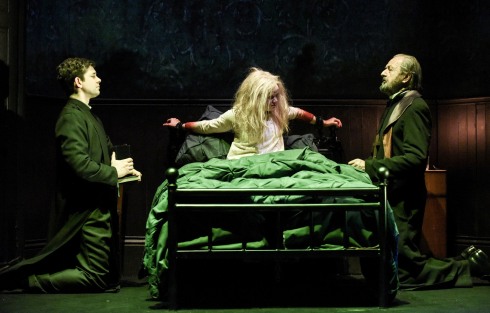