Not dreaming but being

Richard O’Brien’s cult camp classic is doing the rounds again in this exuberant production.  I’ve been a devotee for decades and I’m sure I would have enjoyed the show on its own merits were it not for the actions of one of America’s inexhaustible supply of gun-toting shitheads.  On Saturday night an inexcusable cunt murdered innocent people in a Florida gay bar, just because they were there.  My thoughts have been coloured by this act of hate-filled cowardice ever since.  And so it was heartening to approach the theatre and see so many people in costume.  Men in drag – straight men, many of them – getting into the spirit of the show, wobbling on high heels, squeezed into unfamiliar basques, and sweating under polyester wigs.  I felt decidedly underdressed by comparison.

It struck me, more than ever, how the show is a celebration.  Uptight straight couple Brad and Janet are changed forever by their encounter with the flamboyant, predatory Frank N Furter.  Their eyes (and their legs) are opened to other possibilities.  And it got me thinking what would our culture be like if LGBT people did not contribute?  Dull, flat, white bread – it doesn’t bear thinking about.

As saccharin sweet Janet, Diana Vickers is wonderful, showing her character’s sexual awakening in her voice as much as her acting.  Richard Meek is a sturdy, stand-up Brad, testing the boundaries of his masculinity.

Fellow Dudley boy Norman Pace excels as the Narrator, managing the audience interjections assertively but always with a sense of fun, and it is an absolute pleasure to see the remarkable Kristian Lavercombe as Riff Raff again – a masterful butler, if you can have such a thing.  Kay Murphy’s Magenta is a glamorous vamp, while Sophie Linder-Lee’s Columbia is perky and brittle – her drug-induced freak-out is hilarious.  Good value is S-Club 7’s Paul Cattermole appearing in two roles, as experiment-gone-wrong Eddie and as Nazi-leaning, wheelchair-bound Dr Scott.  Liam Tamne gives a magnificent star turn as Frank N Furter, adding a touch of Southern drawl and a whole lot of glamour.  Tamne is at his heart-breaking best in the closing numbers, with some soulful torch-song singing.  But tonight, for me, scene and heart were stolen by Dominic Andersen as Rocky Horror himself.  A perfect physical specimen in leopard-print pants, Andersen can sing, move and act.  It was love at first sight.

Director Christopher Luscombe somehow keeps things fresh while giving us everything we expect.  Seasoned audience members know exactly what to shout out and when – you don’t heckle, you participate.  It’s more of a litany than a pantomime.

The show is tons of fun but I am always struck by the downbeat denouement.  But tonight, especially, when Frank is gunned down for going ‘too far’, it is extra powerful.  That he is shot by someone inhuman says it all.

The show concludes with one of the bleakest assessments of our sorry species I have ever heard.  And crawling on the planet’s face, some insects called the human race, lost in time and lost in space and meaning.

The show has never been more relevant and necessary.

And then, we’re all on our feet and dancing the time-warp; we’re clapping and cheering and enjoying the moment, because that’s how life should be lived. 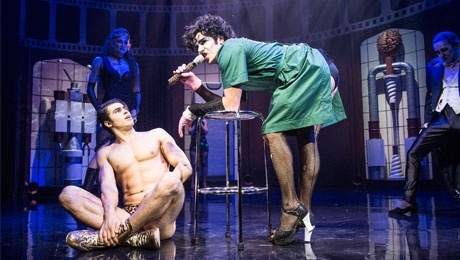 One response to “Not dreaming but being”