This production marks fifty years since Pinter’s play was first staged but the script seems fresh as a daisy. Soutra Gilmour’s design suggests an old-fashioned box set with a red frame delineating the limits of the room in which the action takes place, while the sparse furnishings clearly belong to the era in which it is set. We’re back in the 60s but it’s a highly stylised version. Director Jamie Lloyd intersperses Pinter’s more naturalistic aspects with scene transitions of heightened emotion, where Richard Howell’s expressionistic lighting shows us the characters’ internal lives – moments we can only intuit from Pinter’s dialogue. The lighting is accompanied by George Dennis’s loud and dissonant sound design. It’s unsettling, disturbing – almost an aural representation of Munch’s The Scream.   It works to emphasise the horror and agony of existence for these people, complementing the air of menace Pinter concocts through words and silence.

Max (the formidable Ron Cook) rules the roost as patriarch to three grown-up sons, two of whom still live at home, along with their Uncle Sam (not that one!). It’s a little world of men without women, angry domesticity and bitter recriminations. Into this dark place, eldest son Teddy (Gary Kemp) brings his elegant wife Ruth (Gemma Chan). What begins as an ‘into the lions’ den’ scenario, deftly develops into a ‘cat among the pigeons’ situation, as Ruth joins the ongoing power struggles and plays the men at their own game. Chan is perfectly cast; cool and aloof, reserved but readable. Kemp is good too, as weak-willed, middle-class prat Teddy, contrasting neatly with his brothers: John Macmillan is aspiring boxer Joey, his speech and thoughts slowed by too many blows to the head, and John Simm is charismatic as slimy Lenny, a dodgy geezer and no mistake. Simm is perhaps a little too likeable; his Lenny doesn’t seem quite dangerous or unpredictable enough. Strong as this lot are, for me it’s Keith Allen that shines the brightest as Uncle Sam, subtly effeminate and arguably the only ‘decent’ character in the piece.

Above all, Pinter’s script reigns supreme. Dark and funny and darkly funny, it utilises naturalistic speech patterns and idioms to hint at and tease out character and back story, leading us to clutch at meaning and significance. The sudden outburst of violence still surprises as much as the use of language delights. The play is well-served by this stylish production, although I would have liked Max’s collapse and capitulation to be more visceral and complete – Ruth usurps his throne, before our very eyes; we should be left with the idea that there is no going back. You can’t go home again. 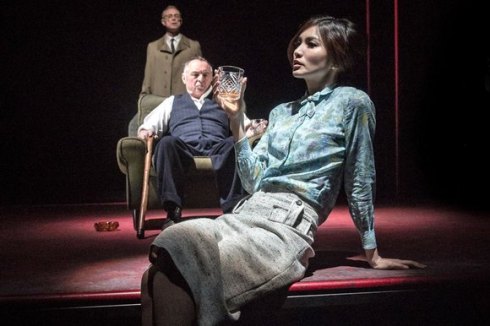