Set in 1963 this new musical by Maureen Chadwick and Kath Gotts takes us to the world of the all girls’ boarding school. Think Malory Towers and St Trinian’s. Think Bunty. This seam has already been mined theatrically by shows like Daisy Pulls It Off but Big Broad Productions push the envelope further: amid the gym slips, navy knickers and midnight feasts, a schoolgirl crush turns out to be the real thing. Threatened with expulsion for her ‘unnatural’ behaviour in the Art room, Susan Smart runs away to London with Camilla, the object of her affections, only to find that she has set her heart on the wrong girl. Susan is devastated to the point of suicide but a fleeting encounter in a dream sequence set in an underground club for lesbians, shows her life is worth living after all.

It’s a cri du coeur and shot in the arm for any LGBT audience member. Susan is ahead of her time in her resolution to stay true to her heart and reaps the rewards, in true musical tradition, for sticking to her guns. Meanwhile the rest of the school is under duress; the newly appointed headmistress Miss Bleacher is draconian, to say the least, removing Art and team sports from the curriculum. The girls are not there to develop themselves and realise their potential; they are merely breeding stock to produce the future sons of England. And so the play is a battle cry for progressive, rounded education. The girls, led by favourite teacher Miss Austin, seek to overthrow the tyrant and restore the principles of the school’s founder.

It’s great fun and riddled with catchy songs with witty lyrics. What is especially pleasing is the variety within the score, rather than trotting out the same tune over and over. The almost exclusively female cast perform with verve and charm. Stephanie Clift is excellent as the troubled Susan, who may be naïve but her cares are no less heartfelt. Georgia Oldman is great as teacher’s pet and school sneak Brenda, while Brianna Ogunbawo impresses as lovelorn Daimler – she has a solo in the dream sequence that is a definite highlight for me. Sara Crowe is in her element as plucky spinster Miss Austin, while Rosemary Ashe is on top form as the cruel and scary Miss Bleacher. She is a villain we love to hate.

The only male member (!) of the cast is the versatile James Meunier, appearing as a cheeky Cockney chappie of an odd job man, and –another highlight – as female impersonator Marlene (Dietrich, no less) in the fantastical nightclub. Kirsty Malpass is also good fun as substitute Games teacher, Miss Givings – the tap dance with hockey sticks sticks in my memory.

Director Anna Linstrum gets the tone just right and Richard Roe’s choreography offers many delights. It’s a consistently amusing piece, Kath Gotts’s pleasant songs never outstay their welcome, Maureen Chadwick’s book has silliness and a smattering of innuendo, and the lively cast is perfectly charming.  The catchy and varied score is performed by a tight ensemble led by MD Helen Ireland

What lets it down somewhat is the set. Cut-outs represent the school and other pieces of scenery, as though they were illustrations in a novel or a comic of this genre. I get the idea but unfortunately they look like pencil sketches, drab and unfinished. Later scenes in London add colour, supporting the vibrancy of the performers. I think the pencil sketches need inking in at least!

With something to say about the nature and purpose of education as well as the experience of LGBT teenagers, Crush is never preachy or ‘right on’ and deserves a wider audience. The emphasis is on fun and what shines through is a gently mocking affection for the genre that inspired it. 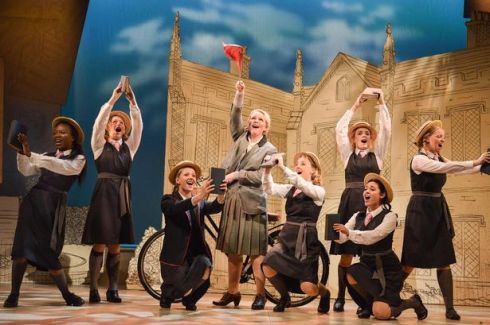 One response to “Heartache and Hockey Sticks”