This new version comes to the Belgrade courtesy of HighTime Opera company, a small-scale outfit whose mission is to bring opera to everyone and not just the elite few. With this production, they make a giant stride towards that commendable aim.

Adelheld Wette’s libretto translates the action from the traditional gingerbread cottage in the woods to a circus tent in a rubbish tip, swapping the Witch for an evil ringmaster. The grubby, big top setting (designed by Richard Evans) works for the most part, due to its built-in theatricality but I will own up to trepidation when a trio of clowns, (old-school Pierrot faces) perform in dumb show during the overture. The show is in danger here of becoming twee – these fears are dispelled as soon as the story gets going and the singing begins.

Alexa Mason is a magnificent Gretel, physically presenting a little girl and all her caprices and vocally one of the clearest I have ever heard. Sian Cameron is brother Hansel, all chavvy in hooded top and trackie bottoms. Both performers capture the childishness of the eponymous siblings – director Felicity Green gives them oodles of business. The stage is never static.

Wendy Dawn Thompson is their hard-nosed, hard-working (and yet trapped in poverty) mother, with a plaintive edge to her singing, while their father, a swaggering and affable Jon Stainsby is all optimism and tra-la-la. The contrast is highly effective.

There is a pleasing appearance by Caroline Kennedy as the Keeper of Birds and Charlotte Ireland impresses as a Magician. As the villainous, camp and cannibalistic Ringmaster, Oliver Marshall’s characterisation is delicious and I am sure his voice will develop more power as he gains experience.

The cast is augmented by a throng of local children who are incorporated into the action, singing sweetly and trying their best. Strange to see a story in which children run away from the circus!  But it is important to expose youngsters to this art form before any cultural preconceptions and prejudices set in, if opera is to be accessible to all.

Engelbert Humperdinck’s richly coloured score is served well, stripped down to a piano arrangement. Special mention must go to pianist Richard Black for his flawless, nuanced playing. Conductor Benjamin Hamilton keeps the whole thing ticking along, managing the timing of the action seamlessly with the tempo.

It’s an amusing take on the traditional tale (it’s more Roald Dahl than Brothers Grimm) and goes to demonstrate how small-scale productions can work extremely well, given an appropriate choice of material. This kind of treatment would suit something like Cosi fan tutte very nicely – but not so much Gotterdammerung! 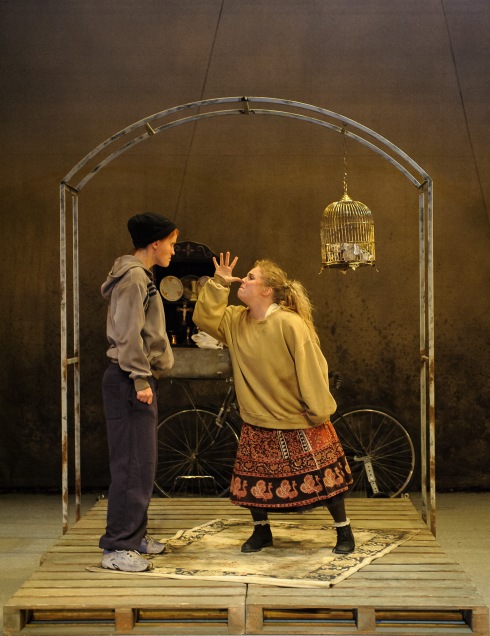 One response to “Far From Grimm”