This spellbinding production translates John Van Duren’s 1950s play to the 1970s, making it a period piece of sorts.  There is something otherworldly about Michael Holt’s set.  Its stylishness is offset beautifully by Danielle Beattie’s atmospheric lighting and James Earl-Davis’s eerie sound design of chimes and bells and what sounds like someone running their finger around the rim of a wine glass.

We are in Gillian’s London flat; Gillian is an independent, confident and wilful gal about town but it’s not just Women’s Lib that empowers her.  She is a witch, able to manipulate situations to her advantage.  When Anthony, the handsome bloke in the flat above, catches her eye and she learns he is engaged to an old school rival of hers, Gillian casts a spell on the hapless young man and he is unable to resist her.

As Gillian, Emma Pallant has a commanding stage presence – there is something hypnotic and seductive about her, something feline – like a panther in its lair.

In contrast we have her warlock brother Nicky, who sounds like Adam Faith in Budgie but dresses like Huggy Bear.  Adam Barlow literally lights up the stage in a measured and nuanced comic performance.  There is an undercurrent of menace offset by his flamboyant clobber and his disco strut.

Janice McKenzie is a delight as Queenie, in glorious Dracula’s Auntie costumes.  Director Gwenda Hughes doesn’t overplay the laughs, instilling a level of credibility in the fantastical aspects of the plot.

Geoffrey Breton does an appealing turn as the enchanted Anthony and there’s some lovely character work from Mark Chatterton as self-professed expert in magic, the muggle Sidney Redlitch.  And special mention must be made of ‘Casper’ who appears as Pyewacket, Gillian’s feline familiar.  Unlike the Blue Peter cats or McCavity, he doesn’t seek to flee the scene at the first opportunity.

A thoroughly enjoyable production of an intelligent and funny play.  There are no short cuts to falling in love, that magical state that renders us all too human. 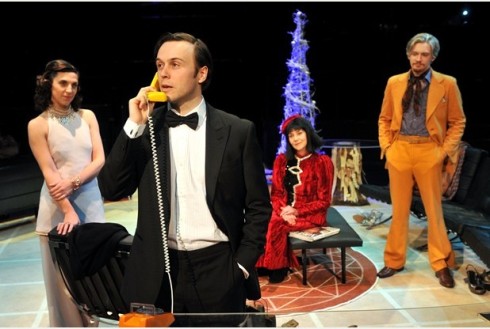