Every year I make the pilgrimage to the Potteries for one reason only: the Jonathan Wilkes pantomime. My reviews of previous productions all say the same thing: Wilkes is in his element, it’s great rough-and-ready knockabout fun, and so on.

Disappointingly, this year the shine has gone off the bauble. There is something not quite there. It’s not the production values; the show looks great. It’s not the music – in fact, the musical numbers sound a cut above anything else you might hear on the panto circuit, thanks to the astounding talent of West End star Louise Dearman as Alice Fitzwarren, and energy levels rise when the hard-working dance troupe comes on to perform Nikki Wilkes’s choreography.

The problem, I believe, lies in the lacklustre direction. Wilkes and his regular dame Christian Patterson share the director’s chair, not for the first time, but I detect a touch of complacency in their approach. On stage they are an excellent double act. They have proved this year after year and they are obviously good mates in the real world. But they do need a good kick up the arse.

The show comes across as more of a walk-through than a run. Familiar routines and corny jokes are all in place, but there is a sense of just going through the motions. The 12 Days of Christmas is particularly offhand and slovenly. It’s not even a matter of a lack of surprises. When the material is so familiar, you need to see it delivered with skill and precision. Wilkes and Patterson can do, and have done, much better than this.  It feels like they are phoning it in this year.

At one point a giant inflatable sausage springs from a hob, giving rise to off-colour gags, which may or may not be ad libs, and for a brief moment, the old sparkle is there. But, like the sausage, the show can’t maintain this level of freshness and fun and begins to flag and flop again.

On his home turf, Wilkes can do no wrong in the eyes of the locals. He is the family favourite doing his annual party trick. But I think the Wilkes-Patterson partnership needs perhaps to take a break. Or get in an outside director to put them through their paces. This Dick is flaccid and unsatisfying when it should be giving us a wild ride and leaving us breathless. 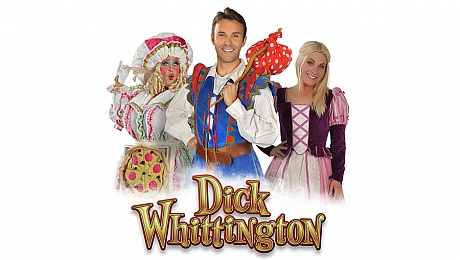 Novelist (Brough & Miller, sci fi, historical fantasy) Theatre critic http://williamstaffordnovelist.wordpress.com/ http://www.amazon.co.uk/-/e/B008AD0YGO and Actor - I can often be found walking the streets of Stratford upon Avon in the guise of the Bard! END_OF_DOCUMENT_TOKEN_TO_BE_REPLACED
This entry was posted on Monday, December 29th, 2014 at 9:49 am and tagged with Christian Patterson, Dick Whittington, Jonathan Wilkes, Louise Dearman, pantomime, Regent Theatre Stoke on Trent, review and posted in Theatre Review. You can follow any responses to this entry through the RSS 2.0 feed.
« A Load of Cobblers
Ice Screams All Round »

One response to “Floppy Dick”