The Grand’s pantomime this year is the classic Cinderella and I have to say it’s perfect.

Julian Clary heads the cast, so to speak, not in the title role but as the Prince’s right hand man, Dandini in a series of evermore elaborate outfits.  Clary’s act is a good fit for panto: the relentless innuendo (he slips one in every other minute, they come thick and fast, etc…) and the mocking of the grown-ups in the audience – these have been panto staples for centuries.

But here’s what’s magic about this production: no single element or personality is allowed to dominate.  This is not merely a vehicle for Clary to sell his hilarious wares.  Everything blends to create a perfect piece of entertainment – I’ve used the P word twice now and will do again before this review is over.

There is spectacle and special effects, singing and dancing and slapstick – everything you’d expect, and it all works in concert to dazzling and highly entertaining effect.

Niki Evans, flying in on a crescent moon, as the Fairy Godmother is clearly in her element.  She is afforded opportunities to show off her belter of a pop-star voice and practically twinkles with panto charm.  Her native Black Country accent adds comedy and bathos to some of her more outlandish declamations.  Absolutely delightful.

Joe Tracini (latterly ‘Dennis’ off of Hollyoaks) is an irrepressible and lovable Buttons, demonstrating an impressive range of skills from slapstick to magic tricks to singing… The man is a great ball of showbiz and thoroughly endearing.  His knockabout japes are the perfect (there I go again) foil for Clary’s sniper-like sarcasm and double entendres.

Ben Stock and Tony Jackson are the Ugly Sisters – a wickedly funny, bitchy pair of drag queens and – here’s the test of the Ugly Sisters – they play the invitation-tearing scene with exquisite evil.  Their bullying elicits genuine gasps from the kiddies in the audience, and is all the more effective thanks to a charming and vivacious portrayal of Cinderella herself by Alice Barker.

Speaking of Charming, Will Richardson is the dashing Prince.  For the most part he’s the ‘straight man’ to Julian Clary, but when we get to the ballroom scene, his duet with Alice Barker is lovely.  Director Andrew Lynford knows when to turn on the romance – indeed, he gives all aspects of the story and all the ingredients of pantomime time to come to the fore when necessary.  (Have I mentioned yet that this show is perfect?)

Iain Stuart Robertson is an affable Baron Hardup, and Ian Gledhill’s Lord Chamberlain shows what can be achieved by a strong character actor in a minor role.  With a chorus of dancers, a troupe of babes and a small but hardworking band (under the musical direction of David Lane), energy fills the auditorium.  I had such a good time.

In all honesty, I can’t fault the production.  If you’re looking for traditional fare for your seasonal entertainment , you won’t go wrong with this one. 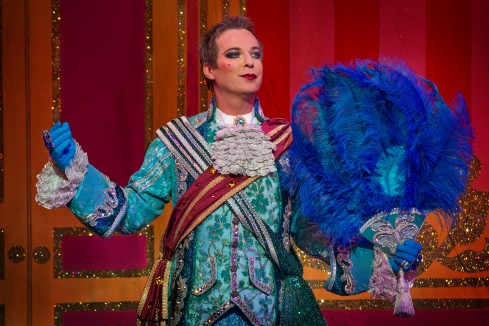 Novelist (Brough & Miller, sci fi, historical fantasy) Theatre critic http://williamstaffordnovelist.wordpress.com/ http://www.amazon.co.uk/-/e/B008AD0YGO and Actor - I can often be found walking the streets of Stratford upon Avon in the guise of the Bard! END_OF_DOCUMENT_TOKEN_TO_BE_REPLACED
This entry was posted on Wednesday, December 10th, 2014 at 11:07 am and tagged with Alice Barker, Andrew Lynford, Ben Stock, Cinderella, Grand Theatre Wolverhampton, Iain Stuart Robertson, Ian Gledhill, Joe Tracini, Julian Clary, Niki Evans, review, Tony Jackson, Will Richardson and posted in Theatre Review. You can follow any responses to this entry through the RSS 2.0 feed.
« Rubbing Along Nicely
Yes It Most Definitely Is »