Presented as the second half of a double bill with Finger, Trigger, Bullet, Gun to kick off the REP’s BE Festival, this piece won last year’s first prize and audience prize, and now having seen it for myself, it’s easy to see why.

Two actors in an empty space, with only a few cardboard boxes that contain the props they need, re-enact the personal history of one, Ivan Hansen, our narrator – who has mad professor hair. The other characters are played, sometimes two at once, by Pekka Raikkonen whose strong features are impressively expressive and plastic. Ivan begins with the death of the man in the flat next door, a neighbour he hardly knew. This event leads him to reminisce about his friendships – there is plenty of fun with childhood chums, fishing, riding bicycles, skimming stones, in a dazzling display of physical comedy and mime, enhanced by sound and lighting effects. The timing is spot on.

Ivan considers how the changes in the world have made it possible for him in Denmark to be friends with Pekka in Finland – in the past they would never have met, or perhaps only on a battlefield. It’s a sweet and thoughtful piece, relentlessly inventive and performed with energy and brio by this likeable pair. Above all it is very entertaining. They incite us to introduce ourselves to the people beside and behind us – which is not as cringeworthy as it sounds. It’s all about making connections and building relationships – in contrast with the dominant (domino-ant) theme of the earlier play!

One piece of advice: accept the actors’ invitation to join them on stage for a shot of Gammel Dansk – but knock it back as quickly as you can! 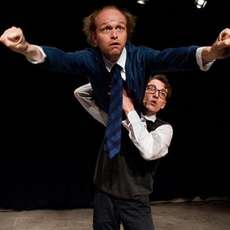 Novelist (Brough & Miller, sci fi, historical fantasy) Theatre critic http://williamstaffordnovelist.wordpress.com/ http://www.amazon.co.uk/-/e/B008AD0YGO and Actor - I can often be found walking the streets of Stratford upon Avon in the guise of the Bard! END_OF_DOCUMENT_TOKEN_TO_BE_REPLACED
This entry was posted on Thursday, July 3rd, 2014 at 2:06 pm and tagged with BE Festival, Ivan Hansen, Next Door, Pekka Raikkonen, review, The REP Birmingham and posted in Theatre Review. You can follow any responses to this entry through the RSS 2.0 feed.
« Domino’s Piece, ah!
Doing What They Orton »