Birmingham Rep’s Christmas show this year is an enormous improvement on their recent yuletide offerings. Last year’s joyless Secret Garden, for example, was an abject lesson in how not to do a festive show.

Rufus Norris’s adaptation of the Charles Perrault fairy tale is high on charm, heavy on the fart jokes and not afraid to be scary and gruesome when the story requires it. The acting style is broad but not without subtlety: the characters (archetypes rather than stereotypes) are presented as overgrown children; they stamp their feet, they sulk, they see the world as if it is revolves around them. This is a refreshing alternative to the stylisation of traditional pantomime.

Driving the story as protagonist-cum-antagonist-cum-narrator is Fairy Goody (Jenna Augen) who has the unfortunate affliction, whenever she casts a spell, of letting rip exaggerated blasts of flatulence. It is a running joke that is not overdone – in fact, as in-your-face and as loud and as brash as this production is, it never outstays its welcome and remains entertaining and surprising right until the end. The parties of school children that attended the same matinee as me were certainly enthralled, captivated and amused from start to finish – what better mark of quality could you hope for in a children-focussed show? There are also plenty of jokes for the grown-ups to appreciate. Everything is pitched exactly right.

The long-anticipated kiss-the-Princess-awake scene is handled with humour and originality, with the Prince (Ciaran Owens) displaying that beneath his heroic posturing and swagger he is still a boy with an immature aversion to girls. But there is no happy-ever-after, not just yet at any rate. This is only the end of the first act. When the action resumes, a few years have passed and Beauty and her Prince now have two puppet children. They are in peril from the Prince’s mother, a cannibalistic Queen (Moyo Akande) who is both hilarious and terrifying at the same time. There are grisly scenes involving a donkey, a goat and a pussycat but these are handled with such verve and gusto, the audience is swept along. The Queen reveals herself to be an Ogress and the Prince a half-breed. Beauty baulks at this at first but promises that if he should ever bite her, she will bite him back only harder. No wilting lily, she.

The whole company is strong. When they’re not being courtiers, slaves or animals, they form a chorus of woodland sprites who mimic the last words of each line of dialogue in that annoying way that kids do. These sprites form the wall of thorns that surrounds the castle but they also provide musical accompaniment and sound effects, on strings, brass and percussion. The whole things ties together very well. Director Sarah Esdaile keeps the pace cracking along – there are a couple of slides on either side of the proscenium via which characters make speedy entrances (and in this case, unlike the RSC’s Heart of Robin Hood, does not become tiresome)

A huge wheel hangs over all, the spinning wheel that fulfils the fairy’s curse and also the wheel of life or fortune. For all its fairy tale fun, the play makes no bones about its darker message: that love and life don’t last for long so get on with it. 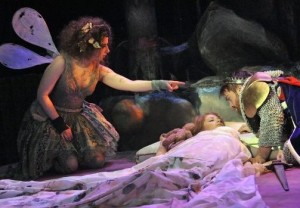 Novelist (Brough & Miller, sci fi, historical fantasy) Theatre critic http://williamstaffordnovelist.wordpress.com/ http://www.amazon.co.uk/-/e/B008AD0YGO and Actor - I can often be found walking the streets of Stratford upon Avon in the guise of the Bard! END_OF_DOCUMENT_TOKEN_TO_BE_REPLACED
This entry was posted on Wednesday, December 7th, 2011 at 7:21 pm and tagged with Birmingham Rep, Charles Perrault, Crescent Theatre, review, Rufus Norris, Sleeping Beauty and posted in Theatre Review. You can follow any responses to this entry through the RSS 2.0 feed.
« Writing With The Enemy
A Measure to Treasure »