Mademoiselle F was the first person to be diagnosed with what is recognised today as OCD.  We join her in her room in a Parisian asylum in the 19th century, as she battles with and succumbs to her compulsions in a never-ending internal struggle.  In the title role, Miriam Edwards imbues the part with nervous energy and fragility.  She is accompanied by Tyrone Huggins in the role of Polar Bear, who acts as a visitor and a nurse, but mostly as a polar bear.  He regales F with stories of his life in a present-day zoo.  The stories fascinate F (and us) and his descriptions of the modern world have a strong ecological message.

Writer Vanessa Oakes draws parallels between F in her room and the bear in his enclosure, between the mental illnesses suffered by animals in captivity and the prevalence of smartphones in society and our compulsion to continually check them.  There is more to the play than a case study of an all-but forgotten Frenchwoman.

Miriam Edwards finds light and shade in the neuroses of F, and I could listen to Tyrone Huggins all day as he explains everything with warm authority.  Director Mark Evans keeps things tight in the empty but intimate setting, further limiting the space with a length of rope, symbolising the polar bears’ dwindling natural habitat.

It’s engaging, provocative stuff but it’s a case of the contemporary social commentary, with its direct relevance to the way we live, overshadowing the thin biography of the eponymous, practically anonymous, mademoiselle.

Of the 200+ performances I enjoyed or endured this year, I have whittled out a list of my Top 20 – although to place them in rank order would be an impossible task.  Twenty is an arbitrary limit; I could go on and on about the many great shows I have seen but then I may as well just link to my entire blog.

To begin with, it’s been a good year for my favourite touring company, Oddsocks, with a superb summer show, The Comedy of Errors and a rip-roaring Christmas production, a surprisingly dramatic Treasure Island, but for me the jewel in their dazzling crown is the wonderful R.O.G.E.R Radio double bill that got me giggling last Spring when I caught it in Derby.

Speaking of Derby Theatre, they’ve had a cracking good year with productions of Cooking With Elvis and Kes – the venue continues to establish itself as a top quality producing house as well as presenting touring productions of the highest calibre, such as The Seagull.

Lenny Henry blew me away with his towering performance in Fences at Malvern – a theatre which snags many excellent shows before they open in the West End.  Also in this category is hilarious new farce, The Duck House.

Down in that London, I enjoyed Ben Whishaw and Judi Dench in Peter and Alice – Whishaw was to impress me again a few months later with his chilling turn in Mojo at the Harold Pinter.  Book of Mormon became one of my favourite musicals and I adored Suranne Jones in the revival of Beautiful Thing.

On a smaller scale, Warwick Arts Centre was host to the astonishing Beats and Tomorrow’s Parties, and The Door at the Birmingham REP gave us the powerful Hopelessly Devoted.  I was very lucky to catch the superbly moving For Their Own Good at the MAC before its award-winning stint in Edinburgh.

Cream of the crop at the RSC was an elegant Richard II, a bawdy A Mad World My Masters and a bloody good Titus Andronicus.

The wonderful New Vic gave us a giddying display of creativity in its immensely physical and exhilarating Around the World in 80 Days with man-shaped rubber band Michael Hugo in excellent form.   This show is tied with the very different The American Plan (St James Theatre) as my Show of the Year.   That being said one of the finest productions I was privileged to see was Birmingham’s Crescent Theatre’s A Funny Thing Happened On The Way To The Forum, which was amateur in name alone.

Also at the New Vic was Alan Ayckbourn’s latest play, an out-and-out masterpiece, the remarkable Arrivals and Departures.

Oops, I think I’ve gone over my allotted 20 already.

Of course, not everything is brilliant.  There have been dull shows and disappointments but oh, go on then, you’ve twisted my arm: here’s the worst of what I endured in 2013.

Rising Damp was misjudged throughout but the overall stinker has to be the ongoing tour of Cats.  I just don’t get it.  No one can like everything, I suppose.

My diary for 2014 is filling up already.  I’m looking forward to getting this bum on many more seats. 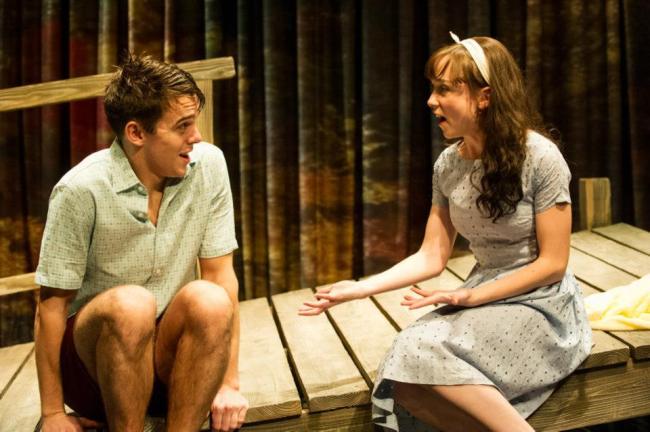 Luke Allen-Gale and Emily Taafe in THE AMERICAN PLAN