Khaled Hosseini’s novel comes to the stage in this engrossing adaptation by Ursula Rani Sarma.  Set in Afghanistan after the Soviets left, this is the story of two women who are married to the same man.  Sharing hardship and mistreatment, the two women form a bond that lasts for years, leading to one of them making the ultimate sacrifice.  It’s a gripping tale, superbly told.  Sarma’s script brings out humour and warmth in horrendous circumstances as bombs drop on Kabul and the Taliban takes control.

The production hinges on the central performances of the two women.  Sujaya Dasgupta is instantly appealing as young Laila, driven by tragedy to marry the man who rescues her from the rubble of her family home.  Laila is primarily a victim of circumstance and oppression, but she has an indomitable spirit.  Dasgupta brings her to life without sentimentality; we are with her all the way.  Also great is Amina Zia as the initially resentful Mariam, regarding Laila as a threat but warming to her as events unfold.

Pal Aron is perfectly villainous as the tyrannical Rasheed, while Waleed Akhtar cuts a sympathetic figure as Tariq, Laila’s young love.  We meet Tariq in flashbacks, with Akhtar and Dasgupta displaying youthful vigour and innocence.  There is solid support from Shala Byx as Aziza and Munir Khairdin in a range of roles.

Ana Ines Jabares-Pita’s set is a rocky landscape, serving as all the story’s locations – the characters are forever stuck between rocks and hard places!

This is a fitting swan song for the REP’s artistic director, Roxana Silbert, before she leaves Birmingham for pastures new.  Thoroughly involving, this is an excellent piece of storytelling, casting light onto a part of the world we don’t hear much about.  The play emphasises the humanity of the characters – of all the characters, even the loathsome Rasheed! – and we see just how ordinary and relatable they are, even in the face of extreme events.  The story could be played out in other countries (Syria, for example) to remind us that behind the statistics and the headlines, these are real people’s lives and experiences.

A wonderful piece of theatre, powerful, pertinent and captivating.  Splendid, in fact.

Ishy Din’s new play, co-produced by the Belgrade with Leicester’s Curve Theatre and Watford’s Palace Theatre, is a good fit for the B2 space.  Isla Shaw’s impressive set brings us inside a barn near the French town of Ypres.  Rafters spread like the ribs of a wrecked ship or a beached whale, as though the armies at war around it are fighting over something that’s already dead.  With atmospheric lighting by Prema Mehta and sound design by Jon Nicholls that enables to imagine the conflict raging offstage, the scene is set for an engaging and powerful drama.

Into the barn come commanding officer Thomas (Jassa Ahluwalia) and Sadiq (Simon Rivers), following orders to secure the location.  An appealing Ahluwalia convinces as the young toff, out of his depth – even his salutes betray his nervousness.  Rivers’s Sadiq is more practical, a professional soldier.  They are joined by Sartaj Garewal as AD and, later, Waleed Akhtar as Ayub.  Humour comes from the clash of cultures and the language barrier.  Subtly, the actors use different accents depending on who they’re conversing with.  Ahluwalia is ‘teddibly, teddibly’ upper class Brit – when the men speak to him, their Indian accents are thicker.  When the men speak among themselves, they’re ordinary, working class blokes.

Rivers and Garewal are especially strong – perhaps that’s unfair: this is an excellent quartet! – in their heated and often very funny exchanges.  Through contact with these men, Thomas grows in confidence and learns appreciation of their culture, through cuisine and their respect for the fallen.  Din’s tight script enables us to get to know these men, as Thomas gets to know them – it’s reminiscent of Journey’s End, in this respect, so that when they finally leave the barn to face their fate (shades of Blackadder Goes Forth here!) we care about what might become of them.

Director Suba Das slowly winds us up.  Tense moments, loud moments, are contrasted with humour and silence.  It’s a timely reminder of our common humanity: these soldiers fought on our side, even if they weren’t exactly sure what they were fighting for.  In these times of rising resentment against the foreigner using our resources, the play is starkly relevant as well as marking the sacrifice of other nations supporting the British cause during WW1.

More fun than you might expect with emotionally charged, engaging performances, Wipers is a superb addition to the ongoing centennial commemorations of the so-called Great War. 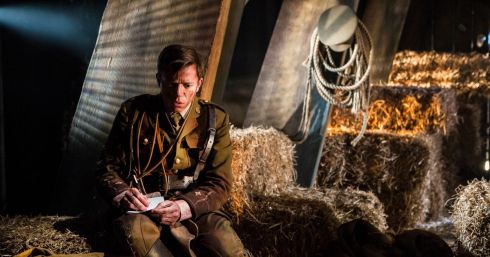 It’s not every day you get invited to see a play written by a polar bear… Imagine my embarrassment when I realised that Polarbear is the pseudonym of writer Steven Camden! But even so, I’m always keen to see new work from new playwrights.

Camden’s debut piece is a three-hander about three ordinary lads from Smethwick. We spend a weekend in their company on a camping trip to Snowdonia. The trip is a goodbye adventure because one of their number, Luke (Lawrence Walker) is leaving for Leeds University on the following Monday. It’s a one-last good time story, and so a bittersweet vein runs through it.

Ostensibly, Luke is our narrator – although this task is shared almost equally among all three. It’s quick-fire stuff. The writing and the delivery have the brio of a Berkoff, albeit in Brummie accents. The actors bat the story around between them like a ball they’re trying to keep in the air. It’s very funny. Director Tessa Walker keeps that ball bouncing from hand to hand, but at times it does need to slow down just a little. Some clarity is sacrificed on the altar of speed.

Among the bickering and banter, there is a lyrical quality to the writing (again bringing Berkoff to mind) and throughout the boys’ misadventures, encounters and arguments (both heartfelt and petty), we are drawn in, by the characters and by the performers. It’s hard to say who I like more, the fictional creations or the actors bringing them to such entertaining life. Their inevitable parting at the end is poignant without being mawkish. They are to begin the next, as yet, unwritten chapters of their lives. The trio is split, never to be the same again. And that’s very sad – but part of growing up.

Lawrence Walker is very strong as undergraduate Luke, but then so are the other two. Sam Cole’s Tommy and Waleed Akhtar’s Zia come across as rounded characters, and all three actors drop into other characters with skill and ease. Akhtar’s comic timing impresses the most – we can believe Zia’s ambition of becoming a stand-up comedian.

The staging is simple – a red stepladder suggests the tent and a small ramp covered in fake grass is both the car and the Welsh countryside. Simon Bond’s lighting adds atmosphere, picking the actors out in camp firelight, as they embark on a bit of primeval dancing, helping us to paint the scenery described by the characters in our heads.

The play is a portrayal and a celebration of friendship but on another level, beneath the surface, the split of these three (one white, one Asian and one mixed-race) hints at coming divisions in society. As a microcosm for Smethwick, or indeed the UK as a whole, the three friends have rubbed along nicely for years, despite or perhaps because of their differences. It is sobering to think of them going their separate ways and something very special being lost.

Back Down is an exuberant and effective debut. I look forward to Polarbear’s next piece – like a Sealion waiting to be thrown a fish…