Phil Porter’s new play ‘borrows’ heavily (to put it mildly!) from the works of Roman comic genius Plautus – Porter is by no means the first to do so; everyone from Shakespeare to Frankie Howerd has been influenced by Plautus’s outlandish plots and larger-than-life character types.

Colin Richmond’s set is a painted representation of two Roman houses – the artificiality is undisguised, as a prompt to tell us we are not in the real world.  In this world, characters are broadly drawn, driven by particular foibles and appetites.  First among them is General Braggadocio (Felix Hayes), a swaggering braggart, a vain, posturing despot – clearly ripe for duping.  Hayes chews his lines with bombast and relish in a massively enjoyable performance.  He quotes and paraphrases Donald Trump – which should tell you all you need to know about what kind of dreadful, narcissistic idiot he is.

Running rings around him is Dexter, the cunning, conniving slave.  This is the Frankie Howerd role, played here by Sophia Nomvete, a hugely likable presence full of charm and warmth.  Her schemes are ludicrous but we take delight in watching them work out, as Dexter copes with each new obstacle that is thrown in her path.

Aiding and abetting (but mostly hampering and hindering) are fellow slaves, Feclus (a hilarious and tightly wound Steven Kynman) whose desperation and frustration are a lot of fun, and  Omnivorous (Byron Mondahl) who, as his name gives away, eats a lot but is at his comic best when he is pissed off his face.

Geoffrey Lumb’s handsome but dim young lover, Valentin, is a wide-eyed twit, while his other half, the general’s concubine Voluptua gives the performance of the night.  Ellie Beaven is the cream of this very rich crop of comedic talent, flitting between characterisations with impeccable timing and nuance – and it’s not the kind of show where you expect much nuance!

There is superb support from Nicholas Day as game old codger Philoproximus and a star turn from Allo Allo’s Kim Hartman as raddled old prostitute, Climax, hurling herself into Dexter’s schemes with energy and style.  Jon Trenchard reinforces the silliness of the whole enterprise, scampering around as Braggadocio’s monkey Terence (named for the other famous Roman playwright, I’ll wager).

Director Janice Honeyman doesn’t miss a trick to keep the laughs coming thick and fast, and much fun is had with some well-placed anachronisms.  Roman comedy gives us the opportunity to mock those who would oppress us, while championing the little guy and revelling in the indomitable human qualities of ingenuity and wit.  It’s not the plots we come for but the playing.  And this production delivers some exquisitely funny playing indeed. 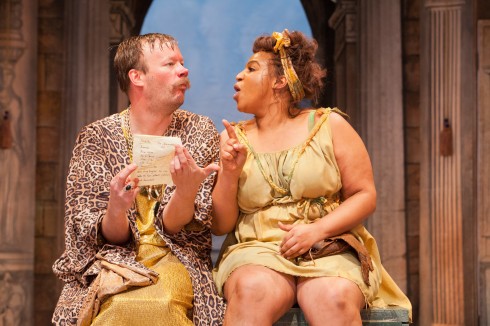