Charles Addams’s characters first appeared in single-panel cartoons in the New Yorker – delicious gems offering snapshots of a dark psyche at work.  When the 1960s TV series appeared, it gave Addams’s family voices and movement, stories that flipped the conventional like a negative photograph.  The show also rendered the characters likeable and appealed to queer sensibilities at a time when there was no other mainstream representation.  We wallow in the Addamses’ morbidity – it is the ‘normal’ that is held up to be ‘other’.

This new musical (music and lyrics by Andrew Lippa, book by Marshall Brickman and Rick Elice) gives the characters songs, many of them good ones, while providing plenty of laughs in the expected vein.

Cameron Blakely is the excitable head of the household, Gomez Addams, an energetic father figure with a Hispanic flavour.  Last seen drowned in a pool in EastEnders, Samantha Womack kills it as his wife Morticia – her deadpan delivery is impeccably timed.  She is impressively dour and supremely elegant; her song ‘Death is Just Around the Corner’ is a definite highlight.

Wednesday Addams is presented as older here than she usually is, losing her little girl creepiness – this is so that she is interested in boys and thereby giving the show its plot.  Carrie Hope Fletcher is undeniably strong in the role but I would have scored Wednesday’s numbers a little less conventionally to make her sound more like a Lene Lovich or Kate Bush type.   It is the lyrics alone that subvert from the norm.  This Wednesday is a musical theatre student who couldn’t decide for Halloween between Wednesday Addams and Katniss Everdene.

Valda Aviks is good fun as the vulgar Grandma, while TV’s Les Dennis is in excellent form as Uncle Fester.  Dickon Gough’s cadaverous butler Lurch almost steals the show with his comic timing.

The ‘normals’ who come to dinner are Dale Rapley as boorish father Mal, Oliver Ormson as Wednesday’s main squeeze, Lucas, and Charlotte Page as mum Alice – the most developed of the three – in a belter of a performance.

Diego Pitarch’s set is beautifully derelict and gothic, while Ben Cracknell’s lighting paints the set in spots and shadows, maintaining an overall darkness with characters in pools of light, just like Addams’s original cartoons.  A baroque chorus of Addams ancestors haunts the stage for added spookiness.

Director Matthew White keeps the thin plot moving along; there is an emphasis on snappy one-liners rather than character development, but everything about this production is exquisite.  We enjoy the time we spend with these people in a show that amuses and delights at every turn. 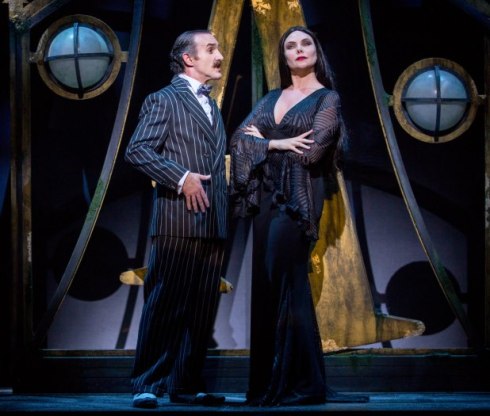