Tag Archives: The Lion The Witch and The Wardrobe

THE LION, THE WITCH AND THE WARDROBE

Mention C S Lewis’s classic book for children and people get a bit misty-eyed with nostalgia, and indeed, the idea of finding a mythical land at the back of your closet has entered the popular imagination.  It’s only when you (and by you I mean me) return to the material that you realise the idea of it is better than the actual experience.  Glyn Robbins’s stage adaptation is faithful to the novel, and that’s probably where it falls short.  It couldn’t half do with a few laughs in it.  Lewis’s dialogue is earnest, sometimes ponderous – they all need to lighten up a bit.  I have several problems with Narnia, but I’ll try to focus on the production playing out before me.

As ever with the Crescent, production values are high.  The costumes in particular (designed by Jennet Marshall) are impressive, sticking to a WWII aesthetic, even in the land beyond the wardrobe.  There is no attempt to animalise the actors playing roles such as Beaver (here presented as a regular Tommy) and his Mrs (all overall and headscarf, like a stereotypical housewife), so when we come to Aslan, he’s very much a high priest sporting a lion’s head hat, his leopard acolytes in ceremonial robes with Cleopatra beads in their hair.  Ruth Collins’s set is basically a stone wall with a central flight of stairs, but there is scenery within this scenery, opening out to show us Mr Tumnus’s cottage, for example.  It falls to the lighting to denote changes of location, time and season – some excellent design here by Kenny Holmes, providing some dramatic visuals;  for example, the sacrifice scene is superbly presented, and the direction matches the visuals, as raggedy creatures in black dance around while the White Witch stands supreme isolated in a white spot against a red wash.

Speaking of the White Witch, Nikky Brady is marvellous in the role.  Imperious, coolly cruel, she stalks around with a regal, if evil, presence.  I do wonder how this witch, who struggles to recognise a human boy when she sees one, knows all about Turkish delight.  Andrew Lowrie is similarly imperious as the pompous Aslan (who strikes me as a neglectful ruler, deserting Narnia for generations and thereby enabling the White Witch to hold sway) and could do with a bit more warmth in his welcome of the Pevensey children.  He shows moments of humour but is perhaps too aloof overall.

Of the po-faced Pevensey children, Lucy (Charlotte Upton) is earnest and passionate; Edmund (Jason Timmington) is mischievous, sulky and lively; but Peter and Susan, the elder ones, played by Sam Wilson and Molly Wood respectively, come across as bossy and bullying prefects.  It’s only when they become involved in the action that I warm to these two killjoys. In fact, Peter becomes quite the dashing hero, while Edmund has all the sass knocked out of him.

Jacob Williams makes for a sympathetic, nervy Mr Tumnus, but most impressive about the casting this time is the chorus of ‘snow spirits’, figures in white who observe the action, creeping around the stage, adding to the atmosphere and creating some rather eerie moments.  Director Alan K Marshall maintains an artistic integrity in his production, even if I’m not particularly enamoured of the material.

Looking at the children in the audience, wrapped up in the story, you can see that C S Lewis’s magic works best on them.  And I can imagine them in years to come, taking their own families to see a production of the story, because they will have a fond memory of it that doesn’t necessarily go deeper than fascination with the idea of it.

This is a high-quality production of a story that’s not my favourite, but it’s commendable in every aspect.  One final point: the children, during wartime, are sent away from home as evacuees to live many miles away with complete strangers, but before curtain up, we the audience are admonished not to take photographs because there will be children appearing on stage.  An indicator of how times have changed! 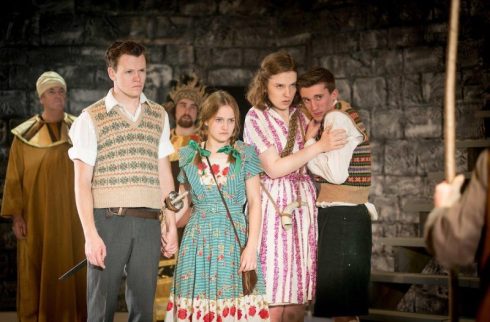 THE LION, THE WITCH AND THE WARDROBE

The REP’s Christmas offering this year pulls out all the stops in terms of production values in order to bring C S Lewis’s classic novel to the stage in this adaptation by Adrian Mitchell. It looks and sounds great. Jamie Vartan’s set has layers that strip away: the real world of the Pevensie siblings is rather two-dimensional but once they step through the eponymous wardrobe, they find themselves in the 3D land of Narnia. The snow-laden landscape looks beautiful under Colin Grenfell’s lights, and with original music by Shaun Davey played live under the baton of MD Neil MacDonald, there is much to appreciate. Narnia’s weird inhabitants (some of them are animals, some are anthropomorphic animals, and some are mythical creatures) are brought to life by some expressive and delightful puppets and some inventive costume designs, inspired no doubt by The Lion King. The transitions between the two worlds, where time moves differently, are stylishly done.

And so technically and artistically, the show is very strong.

The casting too is great. Allison McKenzie doubles as the stern housekeeper and the White Witch, self-appointed Queen of Narnia. She struts around melodramatically and the most incredible vocal sounds come out of her in moments of duress. She’s an enjoyable baddie, a despotic diva. Thomas Aldridge and Sophia Nomvete bring humour (and tons of exposition) as Mr and Mrs Beaver, while Jo Servi is a likeable Mr Tumnus the faun.

The four children are led by handsome Michael Lanni as eldest brother Peter, striving to be grown-up but still childlike at times. Leonie Elliott is solid as sensible Susan, James Thackeray is a suitably surly and self-serving Edmund, and Emilie Fleming brings out the naivety and innocence of youngest sister Lucy. It’s never easy to have adults playing children alongside other adults, but these four pull it off rather credibly.

My problem is with the material. C S Lewis’s heavy-handed allegory has never sat well with me, and Aslan the lion (an impressive, beautifully articulated, three-man puppet that reminds me of War Horse) is unbearably pompous.

Narnia is full of contradictions. They have tea and toast but don’t know what a wardrobe or a spare room are. How they source their Turkish delight is another mystery. But these are quibbles compared to the main plot itself. The children are helped by the Beavers, a funny, friendly couple who turn out to be religious nutters. How quickly the kids are indoctrinated into their cult of Aslan! And then Father Christmas himself rocks up and arms them with weapons for their holy war against the oppressor, the White Witch. The sacrifice and resurrection of Aslan – the most blatant part of the allegory – should be the most powerful part of the story, but by then I’m past caring. It’s all too po-faced and self-important to engage me. Ah, says the Witch, there’s some deep magic rules that mean I can do this. Oh, says Aslan, what she doesn’t know is there’s some deeper magic rules which mean I can do this. Oh, give over, I think, giving up trying to suspend my disbelief.

The play needs to be a little less earnest and to lighten up a lot. It’s all a bit worthy for my tastes to be involving – A pity because the talent on stage and the creativity behind the scenes demonstrate that excellence is well within reach. 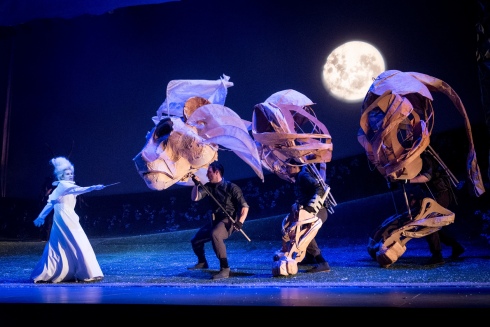