Years ago, back when the Odeon on Birmingham’s New Street was a music venue, I saw Adam and the Ants play, with a huge pirate ship filling the stage.  Adam Ant was up and down that rigging like nobody’s business.  It is a fond memory of one of the first gigs I ever attended.  Now, many years later, he is back, sans Ants, with a concert version of his solo album from 1982, Friend or Foe – the one with hits like Goody Two Shoes and Desperate But Not Serious, both of which prove to be highlights of tonight’s set.   The exuberant brass section that colours the album is here replaced by guitars (along with the signature pair of drummers) giving the set a heavier, raunchier overall sound.

The theme from old TV series The Saint plays the band onstage, setting the tone nicely (and dating most of the audience!) and the set opens with the album’s title track.  Ant looks fabulous, of course, belying his age and he’s in excellent voice.  This is quickly followed by Something Girls, which includes some of the best whistling since One Man and His Dog.  Place in the Country is faster, reinvigorated; we are rattling through the album at quite a lick.  Hello, I Love You (a cover of The Doors) is just about perfect, followed by the autobiographical Goody Two Shoes, which is joyous – anything that follows this banger is bound to sound weak by comparison, so Crackpot History and the Right to Lie seems like the wrong kind of gear change.

The album concludes with the instrumental, Man Called Marco which affords Ant the chance to step and trip around with those snake hips of his – he is wearing the skinniest fit trousers and tight boots that give his legs a spindly, insect-like aspect.  Perhaps he is turning into an ant after all.

“Here are some more songs you might enjoy,” he says, ushering us into Greatest Hits territory, kicking off with Dog Eat Dog – which is like Ennio Morricone doing metal.   Antmusic provides the best moments of the night; it’s just fantastic, and I enjoy the opportunity to revisit older tracks from his early punk days, such as Zerox and Car Trouble.  Prince Charming is an anthem and a call to arms, with its war cry introduction and its mantra, “Ridicule is nothing to be scared of” – words to live by, indeed!   Puss In Boots is great fun, and Kings of the Wild Frontier is stunning, with its darker edge, but it is Stand And Deliver, closing the set, that proves the most exhilarating.  “The way you look,” Ant sings, “you’ll qualify for next year’s old-age pension.”  Well, the lyrics might be catching up with him, but you’d never guess to see and hear him play.  The outfits are less flamboyant but he still cuts a dashing figure.  The man who brought theatricality and fun to post-punk music is still going strong.

The encore is comprised of three ancient tracks, Press Darlings, Red Scabs, and You’re So Physical and while it’s a rare opportunity to hear them with this richer, fuller sound, I kind of hanker for something poppier, like Apollo 9 for example, so we can have a good old singalong before we go.

A wonderful evening that reminded me why I loved him so much in the first place.  Antastic! 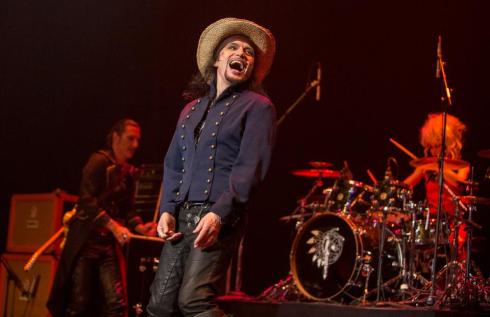 He Is What He Is

He arrives on stage to a rousing welcome from the Birmingham audience and the appreciation never dips from that point.  Shimmying around in a blue suit and black shirt, Barrowman exhorts us to ‘Celebrate good times, come on!’.  This is a party as much as a concert.  The premise is a retrospective of his thirty years in The Business – he deals with his stage and screen appearances in a jokingly curt manner, but I am reminded of his early days on Saturday morning television, and a younger, nervous me going to the stage door after a matinee performance of Sunset Boulevard and meeting a younger, just-as-handsome him.  There were about three of us at the stage door on that occasion; nowadays there are mobs.  He signed my programme and I stammered out a couple of compliments.  (I met him again years later, at a pantomime launch, and managed to get my words out that time!)

There is an emphasis on fun.  Barrowman swaps dick jokes with the on-stage sign language interpreter.  He shows us photographs and video clips of his family and his pets.  And he sparkles and shines every minute.  There’s a bit of Q&A about his time in the celebrity jungle, and there’s more upbeat numbers so we can clap along.  It’s a bit wedding singer at times, but Barrowman can pull off the cheese by dint of energy alone, and the support of his excellent band.

What works best though are ballads like Barry Manilow’s I Made It Through The Rain and the Perry Como classic, And I Love You So – the latter being perfect, beautiful in fact.  Songs like these and show tunes are better platforms for Barrowman’s vocal stylings.  He performs a doctored version of The Wizard and I (from Wicked) and I prickle with shivery nostalgia.  His Doctor Who character, Captain Jack Harkness, was a ground-breaking representation of non-heterosexuality in prime time TV and gave the openly gay actor’s career a jump start.

Barrowman gets us all to wave our hands in the air while he records a clip for Instagram with a rainbow flag in the foreground.  It’s World Pride Day, after all, and we gays (especially those of us who are no longer twinks, twonks or twunks) should be proud of the positivity Barrowman represents.

In the second half, he brings his octogenarian parents on stage.  No ‘slosh’ from them this time, but Barrowman père can out-sauce his cheeky son any day of the week, while Barrowman mère surprises us all into a standing ovation for a well-sung, beautiful song.  She may be visibly frail but there’s clearly nothing wrong with Marion’s vocal pipes.  And we see where he gets it from: the humour from his dad, the singing from his mum.  There is also an appearance from Barrowman’s handsome husband Scott – clearly not at home on the stage, Scott acquits himself with a decent and enjoyable rendition of Quando Quando Quando.

I can do without the In Memoriam section for audience members’ dead dogs; I’d much rather he invited us just to think about loved ones we have lost while he sings Goodbye My Friend – but that’s just my taste, I suppose.  He makes up for it with a gobsmacking performance of the empowering anthem, I Am What I Am.  ‘Fabulous’ has never been more applicable.

The show overruns – we won’t let him go – and it finishes with a soaring version of Loch Lomond.  You can’t accuse John Barrowman of not giving value for money – although at fifteen quid a pop, the souvenir programmes are a bit steep!

Uplifting, funny and inspirational, Barrowman is one of our finest entertainers, with talent as big as his onstage personality.  I can easily imagine being back in another thirty years for more.