Ray Cooney directs this new production of his 1990 farce, complete with bang up-to-date topical references.  These give the play the illusion of happening right now but the structure and genre of the piece root it firmly in the past.  And this is no bad thing – we don’t sneer at those who can still crank out a perfect sonnet; likewise, the well-made farce is an art form that few can pull off.  Cooney is a master.

The set-up is Tory MP (of course) Richard Willey (tonight played by stand-in Geoff Harmer) has rented a suite at the Westminster Hotel in which to entertain the secretary of the Leader of the Opposition.  The couple’s illicit fun is interrupted before it can begin by the discovery of a dead body trapped by a faulty sash window.  Willey enlists his PPS, George Pigden (Shaun Williamson) to assist.  Add to the mix the secretary’s enraged husband, a snooty hotel manager who tends to walk in at the least opportune moments, and an opportunistic waiter and the stage is set for fast-moving action and an increasingly complicated situation.  The laughs keep coming via verbal humour, physical comedy and dramatic irony – we delight in the misunderstandings and their convoluted consequences.

The energised ensemble play the comedy to the hilt.  Susie Amy, mostly in a state of undress, plays panic to perfection.  Arthur Bostrom simmers haughtily as the manager; James Holmes relishes his role as the colluding, mercenary waiter; Jules Brown brings menace and howling vulnerability as the rampaging husband; Elizabeth Elvin amuses as Nurse Foster; Sue Holderness brings a touch of class as Willey’s wife.  The entire cast proves its skills – the pace doesn’t let down for a second – but it is Williamson who is the biggest jewel in this star-studded crown.  His pained expression and increasing confusion and exasperation are expertly portrayed.  The timing is spot on – his desperate puppetry with the corpse (David Warwick being dead good!) is a scream.

The mechanics of the plot and the performance are in perfect working order.  The funniest couple of hours I’ve spent at the theatre for a long time, the play reminds us of the lengths MPs will go to, the lies they will spin, to cover their own tracks.  It made me long for simpler times when all we had to worry about from that lot was their sleazy, personal affairs.  Now, what Willey hoped to do to Ms Worthington is what the government is doing to the whole country – and that isn’t funny.

Director Joe Harmston has put together a company of actors, many of whom are familiar from his productions of Agatha Christie plays, and brings out a different side to them in this delightfully silly show, loosely based on an old Bram Stoker story, The Jewel Of The Seven Stars. From the start, you know you’re in for a treat as Jason Durr narrates the back story, accompanied by some hilariously low-tech projections and shadow play. Jack Milner’s script reminds me of the golden age of radio comedy with its wordplay and double talk, complemented by much on-stage comic business of Harmston’s devising. The laughs keep coming.

It’s not perfect: the quick fire gags are hit-and-miss and the pacing flags a little in the first act. The audience participation that greets us when we’ve come back from the bar for the second act is needed earlier on – especially since the curtain up was delayed by quarter of an hour due to a technical hitch; we needed warming-up by then. The second act tears along relentlessly and consistently daft.

On the whole, it’s a laugh-out-loud romp, played to the hilt by a very funny ensemble. Denis Lill is spkendidly crazed as the Egyptologist on a mission – as well as a couple of other roles – Jason Durr, the heroic lawyer with his eye on Lill’s daughter (there is a dancing scene that ensures I will never regard Durr in the same light) and David Partridge is very funny as bonkers explorer Corbeck. Andrew Bone makes the most of his role as Inspector Doolan.

There is much fun to be had with doubling of roles and dummies but for me the revelation of the night is the beautiful Susie Amy, vamping it up and camping it up as the Professor’s daughter and the reincarnated Egyptian princess. I hope she does more comedy in the future. Dean Rehman’s immortal high priest Sosra is a deliciously evil (and hilarious) creation – I shan’t forget the eye-pulling scene in a hurry.

It’s a great-looking show too. Sean Cavanagh’s set design is almost like a toy theatre; scenes are wheeled on and off on trucks by stagehands dressed as workmen, keeping things moving and allowing for some very funny exits and entrances. Ben Cracknell’s lighting casts a nostalgic glow over the proceedings, the soft haze of an old film.

The Mummy is an old-fashioned slice of British silliness, clever and stupid at the same time, a celebration of artifice and theatricality while sending up its own form. 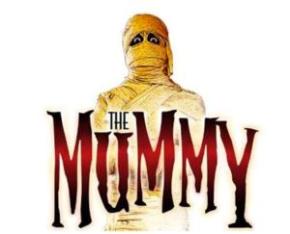 MURDER ON THE NILE
Grand Theatre, Wolverhampton, Thursday 24th May, 2012

Most of the pleasure in these murder-mystery shows comes from trying to out-think the writer and work out what’s happened, sometimes even before it happens. When you see an Agatha Christie, you have to keep your wits about you, Poirot fashion, and more often than not, you don’t see it coming.

Unlike in our own cosmically insignificant lives, in an Agatha Christie, everything happens for a reason. Even if it is a red herring to lead us up the garden path (and make us mix our metaphors), every detail has purpose and we are invited to sift through them and play the game. Or, you can sit there and let it all wash over you, until the denouement.

The Agatha Christie Theatre Company churns out these productions year after year and usually they are very gripping affairs. Sadly, this one is such a slow burner it doesn’t really create any atmosphere until the second half. By the interval, no one was dead – when “murder” is in the title, it’s all you’re waiting for. It’s all Titanic and no iceberg.

We are introduced to the usual mixed bag of characters. Kate O’Mara totters around the deck as objectionable old snob, Miss ffoliot-ffoulkes. After ten minutes I was ready to climb out of my seat and throttle the old bag, so effective was O’Mara’s portrayal. She doesn’t miss a beat and provides most of the comic relief.

Also on board are Christie stalwarts Mark Wynter as foreign (and therefore suspicious) Dr Bessner, Chloe Newsome as unhinged stalker Jacqueline de Severac, and dependable old Denis Lill as Canon Pennefather, a cleric who finds himself playing detective when the murders eventually take place. Impossibly beautiful Susie Amy drawls through her dialogue, while Vanessa Morley as her French maid Louise, glowers and frowns like a double agent in ‘Allo, ‘Allo. Ben Nealon conveys intensity as social-climbing gold-digger Simon Mostyn. Jennifer Bryden gains our sympathy as the decent, put-upon niece to O’Mara’s harridan aunt and Sydney Smith provides grinning support as the steward on this seriously understaffed boat. Additional local colour is supplied by Hambi Pappas as a persistent and annoying purveyor of souvenirs.

Outbursts from the dapper young Communist-with-a-secret, William Smith (Max Hutchinson) could have been written yesterday: the continuing exploitation of the poor by the rich, how the judicial system treats people according to class… Set against a backdrop of Egyptian unrest, this makes Christie seem startlingly prescient. The world hasn’t really moved on since the play first appeared in 1944 – or if it has, it has since taken backward steps.

A sweltering evening in Wolverhampton matched the onstage setting, adding to the atmosphere. I would have preferred more action in first half as I sat there wilting, but on the whole, director Joe Harmston, an old hand at this type of thing, handles the material well, conspiring with Christie to surprise the audience. Moments of action and revelation are tackled very effectively. I worked out what was going on with the Communist but was pleased to be put in my place when whodunit was finally revealed. Turns out I’m no Miss Marple after all.

The ambiguous ending means the story stays with you after the curtain falls and the genius of Agatha Christie has asserted itself yet again.