First came the calendar, then the film, then the play, and now this musical version.  Original writer Tim Firth has teamed up with Gary ‘Take That’ Barlow to rehash the true story of a group of women whose charity calendar turned heads and raked in the dosh thirty years ago.

If this piece is anything to go by, the Yorkshire village of Knapley is inhabited by a homogenous bunch of deadpan Northern charmers, the women are almost uniformly blonde and the cuddly men are interchangeable.  It’s a bit Stepford Wives, but funny.  There are so many characters it takes a while to get a handle on who they all are.

When Annie’s husband’s cancer treatment fails to save him from the disease, her mates at the local Women’s Institute rally in support.  Best mate Chris (Rebecca Storm) comes up with the idea of a nude calendar – in the best possible taste, of course – and some of the women require more persuasion than others.  It’s a long time coming but the best scene of the night is the taking of the photographs, posed with some carefully placed props: plates of cakes, balls of knitting, all the accoutrements of the WI.  While other scenes are mildly amusing, the photo-shoot is the highlight and brings the house down.  It’s a moment of rejoicing, as the women celebrate body positivity and have a reet good laugh while they do it.  It’s like The Full Monty without the social commentary or the economic imperative.

Sarah Jane Buckley heads the ensemble as the eventually-widowed Annie, a more staid counterpart to her best mate Ruth.  Single parent Sue Devaney has the best singing voice but the Christmas Carol medley she has to belt out is a let-down: it’s just unfunny.  Lesley Joseph is in her element as retired schoolteacher Jessie, supposedly respectable but game for a laugh when the crunch comes.  Lisa Maxwell is suitably cocksure as the surgically enhanced Celia, and Danny Howker has some very funny moments as inexperienced teenager Danny – it’s a strong cast without exception but all the while I’m thinking they would be better served in the straight play version.

Barlow’s songs are serviceable but hardly memorable.  Rather than adding depth to the piece, what they bring is length.  Firth’s script aspires to but doesn’t quite reach the genius of the late, lamented Victoria Wood, using the bathos of domestic details to bring out the emotions of particular moments.  Contemplating her husband’s death, Annie wonders who’ll take her to Tesco and argue about margarines with her.

The heart-warming story survives this treatment, and is still a crowd-pleaser to be sure, but (producers, take note) not every bloody film needs to be turned into a musical. 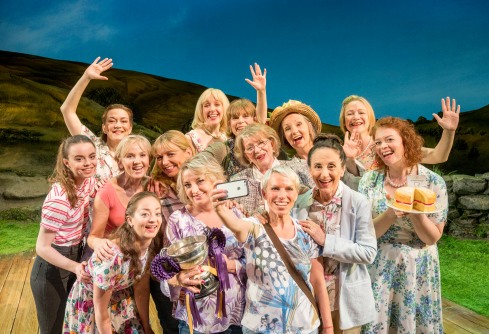 In co-production with Oldham Coliseum, the New Vic presents this jaunty take on the life story of one of the first superstars, Rochdale’s own Gracie Fields, tracing her rise from rags to riches, and then from riches to more riches.  What sets this show apart from other biographies that tell a similar tale, is the revue-style presentation.  An ensemble of actor-musicians populates scenes between a host of songs – the scenes are much like sketches, and the actors portray a range of characters.  The lynchpin is Fields herself – Sue Devaney, graces us with a breath-taking performance, evoking the original northern powerhouse in voice and mannerisms.  Devaney captures Fields’s down-to-earth, lowbrow stylings but impersonation is not the point.  What we get is a whistle-stop tour of key events in the entertainer’s life.  Like many of these stories, the first half deals with her rise to the top, and in the second, having achieved success, personal issues come to the four: Gracie’s marriages, her health problems.

Everything is handled with a light touch – even when she is hospitalised with cancer, a kind of seaside postcard humour prevails, deflecting from the drama with moments of heightened theatricality – if you sit on the front row, you may be asked to lend your name to a walk-on character who doesn’t have one.

Kevin Shaw’s direction keeps things bouncing along and the cast singing as they go – the ensemble voices are lovely in harmony, and each member of the company is a versatile musician.  Musical director Howard Gray achieves a period sound from this talented band of actors.

Among the ensemble, Fine Time Fontayne shines, in his element as George Formby (complete with his voyeuristic hit song about a window-cleaner); Liz Carney is especially strong as Gracie’s lifelong friend – she also does a star turn as Edith Piaf; Jonathan Markwood amuses as Gracie’s Italian second husband – as does David Westbrook as her handyman third, while Ben Stock’s uproarious Liberace is laugh-out-loud funny, and Matthew Ganley’s high-speed Hamlet soliloquy is a wonder to behold.

But, inevitably, Sue Devaney dominates, housing gigantic talent in her diminutive frame.  Her Gracie Fields comes across as a home-grown Fanny Brice, combining the ability to belt out songs with camp humour.  She has her downs as well as her ups, but everything is dealt with in such a light and appealing way, it seems that life really is a cabaret.

It’s undemanding fare, to be sure, but as theatre-for-pleasure goes, it doesn’t get much better than this.  Like Sally in Fields’s signature song, this is right up my alley.