A Grand night out

It’s the 125th birthday of this beautiful theatre and what better way to celebrate than to attend the annual pantomime?  Written and directed by Ian Adams, this is an old-school show with plenty of spectacle, traditional fare and topical gags, something to keep everyone entertained.

Coronation Street’s Ryan Thomas is the eponymous Dick, and he does a good job as the working-class hero and all-round good guy.  He could do with some more audience interaction – this is left largely to the comic characters, such as Aaron James as Idle Jack (a brilliant impressionist and affable fellow) and Ian Adams’s Sarah the Cook, a saucy music-hall character and a double-entendre machine.  Adams gives a masterclass in pantomime damery.

Jeffery Holland, himself one of the best dames in the business, has the straighter role of Alderman Fitzwarren.  We are in safe hands here.  Holland, at the forefront of time-honoured routines like the mop drill, makes the material work, whether you’ve seen it a hundred times or are coming to it for the first time, as many of the younger members of the audience are.

Su Pollard tries her best as the villainous Queen Rat, stalking around like someone from an office Halloween party.  She is great at her musical numbers but there is a conflict between her persona and her role, as if she wants us to like her and not like to hate her.  I would have cast her as a novice Fairy Bow Bells, seeking to earn her wings (aka yellow coat). 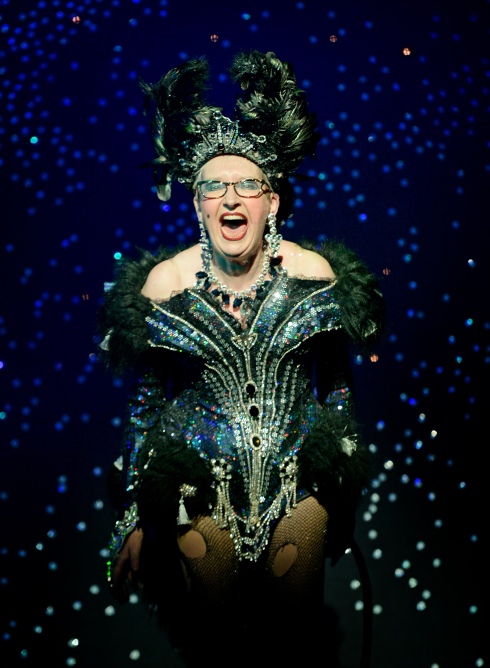 Not that there is any problem with the Fairy Bow Bells we get.  Julie Paton exudes a kind of authoritative benevolence; there is something of Julie Andrews about her – again, we are in very safe hands.  Paton also choreographs and there is a dazzling routine where everyone is seated, a kind of convoluted hand jive that is as charming as it is complex.

Katie Marie-Carter sings sweetly as love interest Alice Fitzwarren but the show is just about stolen by Jordan Ginger as rather posh talking cat Tommy.

The script is peppered with quickfire hit-or-miss gags so you hardly stop laughing.  We don’t get the underwater scene we might expect in this panto and, curiously, with Sarah the Cook on board we don’t get a slapstick cooking scene.  We do get a scary surprise to close the first act and – because it’s gala night tonight, there is an extra-special guest appearance from veteran comic Jimmy Tarbuck himself!  Tarbuck comes on dressed as a sultan, does a few gags and reminiscences a bit, urging us to cherish this grand and beautiful venue.

It occurs to me that this may be the only pantomime based on an historical figure – unless you write in and tell me there was indeed a Mother Goose – but what matters here is the story still works as a piece of family entertainment, and its presented here by highly skilled professionals and with oodles of cheekiness and charm.

Every time I go to see a version of Peter Pan, I am struck by how it’s invariably a mixed bag of a thing: neither a pure pantomime nor a ‘straight’ (for want of a better term) play.  The J M Barrie original acknowledges the audience and encourages participation (and woe betide any version that doesn’t invite us to aver our belief in fairies!).

This one begins, play-like, in the nursery – as opposed to the usual chorus of dancing villagers that begins most pantomimes.  When Peter Pan (Barney Harwood) flies in through the window, he also breaks the fourth wall, and we’re off.  Looking trimmer than ever (thanks to the rigours of his Blue Peter challenges) Harwood is effortlessly boyish and innocent and yet again I am reminded of the high quality of his singing voice.  Many a talent show wannabe would kill to have such a pop-star sound. He is not alone: Wendy (Hannah Nicholas), Tinkerbell (Isobel Hathaway) and Tiger Lily (Billie Kay) all have impressive voices – the songs are ‘originals’ and tuneful enough, but I like to hear familiar if incongruous numbers in a panto; something we can all sing along with.

Su Pollard, playing to a home crowd, is good value as magical mermaid Mimi, essentially playing the dame’s role.  It’s a pity she doesn’t get a range of outlandish outfits to show off but her off-colour jokes are aimed squarely at the older members of the audience are very funny.  She is beaten in the comedy stakes however by Ben Nickless as Mr Smee.  Nickless embodies the most traditional elements of the show, an old-school entertainer – we quickly overlook he is on the side of the baddie.

And what a baddie it is!  As Captain Hook, David Hasselhoff is remarkable.  If you think Americans don’t ‘get’ panto, think again.  He strides around like a colossus, thoroughly at home in his characterisation and a script that is riddled with Hoff-mockery.   Of course there are Baywatch and Knight Rider gags – how could there not be? – but The Hoff takes it all on the chin and somehow retains his dignity, his glorious, cheesy dignity.  I think I’m in love.

And so this particular version of Peter Pan rattles along at a fair pace, providing plenty to entertain everyone.  It hits all the plot points, entertains kids and adults of all ages, is camper than Christmas and leaves you with a big grin on your face.  Highly recommended. 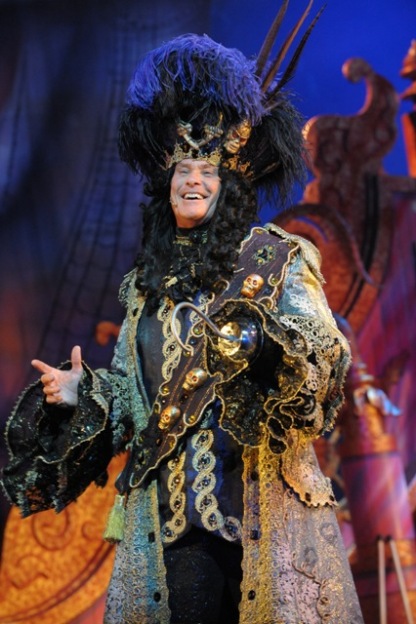 Not having seen this musical for many years, I wanted to see if it was as unpleasant as I seemed to recall.  Perhaps my younger self had judged it too harshly.  Perhaps my aversion to it had been embellished by memory.  Perhaps I’d even enjoy it after all this time.

The overture reminds you of the catchier tunes from the score but it comes to something when the instrumental played before the curtain is preferable to the full song with vocals.

The story begins in a New York orphanage during the Depression of the 1930s – it was so depressing it had a capital D.  A chorus of little orphan girls open the show with no supervising adult, and we are treated to the pitfalls of such a young cast.  They have been well schooled in their American accents but deliver the lines in that lifeless, learned-by-rote manner that is the hallmark of too many child actors.  (If you want to see a troupe of child actors who are more than a match for the grown-ups, hie thee to the RSC production of Matilda!) Their mechanical, performing monkey tricks failed to engage me, but that’s a deficiency of the director and not the enthusiastic young players.

The little leading lady is a curious character.  A sort of tomboy Pollyanna in a ginger fright wig, Annie struts and frets, belting out songs and hitting most of the notes.  She attempts to escape from the orphanage where she and her sisters in bondage are abused, oppressed and exploited by Su Pollard as Miss Hannigan, a sex-starved harridan with a bottle of booze surgically welded to her hand.

On the lam, Annie befriends  a stray dog, a docile creature trained at least as much as the little girls to the extent that it may as well have been stuffed and pulled across the stage on a string.  They make their way to a shanty town, where people whose livelihoods have been destroyed by the economic downturn remain cheerful – even more so when the ginger tonic turns up, scattering platitudes like “You should be glad your empty pockets will keep your fingers warm.”   How they didn’t seize her and chuck her on the brazier I don’t know.

Back at the orphanage, Su Pollard gets to belt out her big number, “Little Girls.”  Nothing about the performance is subtle – but then it’s not a subtle role. Miss Hannigan operates at the same level throughout.  I would have liked to see some variation in tone.  Ms Pollard must have the scariest knees in all show business but where she spoiled things was her big finish, when she failed to rhyme “squirrels” with “girls”, as the Americans would.  A minor detail perhaps, but she did it again when the song was reprised in the second half.

The cops bring the fugitive back to the orphanage and, wouldn’t you know it, along comes the secretary of billionaire industrialist, Oliver Warbucks, whose custom and practice it is to borrow an orphan for the Christmas holidays.  The patronising git.  How cruel to expose a child to his opulent lifestyle and then return it to squalor and abuse!   Way to mess with someone’s head.

Annie finagles her way into the mansion for Christmas where she is met with a nauseating display from Warbucks’s sycophantic servants, as they fuss and fawn over her as if she shits gold stars.

I imagine that in the 1930s (when the original comic strip from which this musical is derived first appeared), the fantasy of being plucked out of poverty by an unimaginably rich man had its appeal.  The equivalent of marrying a handsome Prince in a European fairy tale.  But in this day and age, it’s all a bit too saccharine.

Annie and Warbucks have a sort of Oliver and Mr Brownlow relationship.  After the first week, he is determined to adopt her, despite her propensity as a charisma vacuum.   A cross between Patrick Stewart and Lex Luthor, Warbucks is not an unfeeling industrialist.  He goes through a bit of soul-searching about his decision to adopt Annie, howling his way through a truly awful ballad.  I never thought I’d leave a show and be of the opinion that Su Pollard was the best one in it.

Meanwhile, Hannigan’s ne’er-do-well brother arrives.  He proclaims his name is Rooster and, yes, he is a cock. Together with Rooster’s moll, the Hannigans plot and scheme to get their hands on some of Warbucks’s wonga and do away with the belting brat into the bargain.  They reveal it is their upbringing that inclines them towards criminality and not their poverty and privations because of course, you see, Capitalism cannot possibly be to blame.

What I disliked about the show the first time around, when I was callow and naive, was this cheerful reinforcement of the status quo.  Now I’m older and my illusions are all in tatters, I am appalled by the ideology of the piece.   The poor should just buck up and smile, damn it.  Annie infiltrates the White House and her homely optimism inspires Franklin D Roosevelt to come up with his New Deal.  The sun will come out tomorrow.  Bet your bottom dollar – it’s all too resonant with our current situation, when those without are being called upon to shell out more, while those who still have money get to carry on regardless.  “Daddy” Warbucks makes gestures: Christmas presents for all the orphans; he is instrumental in the entrapment and arrest of Rooster and his moll and in having Miss Hannigan carried off in a straitjacket.  Mentions are made of reform when what these people need is revolution.

Someone more versed in Marxism could write a book on this show’s running dog propaganda.  Or in this case, plodding dog.

On the one hand, it is good to see so lavish a production on a Wednesday afternoon in a windy Wolverhampton and the large company didn’t stint on the energy, the eyes or the teeth.   It is just that I for one find the material distasteful. 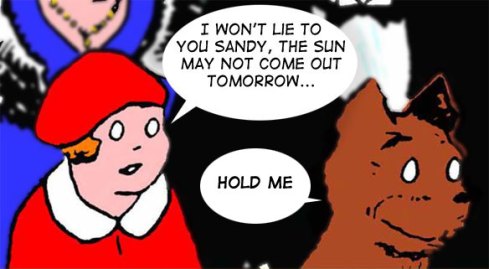