It strikes me as odd that in a musical, where everyone sings and dances at the drop of a hat with impressive proficiency, the characters should see the need to go to a performing arts college.  But, putting this reservation aside, I settle in for an entertaining evening.

David De Silva’s stage show is inspired by Alan Parker’s hard-hitting film and the somewhat sentimental TV series that followed, and so the characters here are versions of the originals, adhering to types and situations familiar from the previous incarnations.

Ruling the roost as the strict-but-caring Miss Sherman, the mighty Mica Paris is in great form.  Her old-school rhythm and blues number in the second act brings the house down, a searing bit of soul-searching triggered by a run-in with illiterate, arrogant bad boy Tyrone (an intense Jamal Crawford).

Stephanie Rojas is appealing as fame-hungry Carmen whose road to the top is diverted by drug abuse; Simon Anthony gives a sensitive portrayal as her musician friend, Schlomo.  Hayley Johnson adds a touch of humour as Mabel (it’s not just fame she’s hungry for!); while Hollyoaks’s Jorgie Porter convinces as graceful dancer Iris.  Molly McGuire’s Serena is one of the more rounded characters.  She gets to sing one of the score’s stronger tunes about her unrequited love for Keith Jack’s Nick.  Jack is excellent and, unlike most of the others, doesn’t just belt out his numbers, but shows us how vocal dynamics can add character to and enhance the meaning of a song.

The trouble is there are just too many characters, too many subplots.  We only glimpse them throughout the course of their four-year studies.  Albey Brookes’s extrovert, very funny Joe has potential for a proper storyline, but he’s elbowed aside in favour of Serena and Nick’s story.  His resolution is tagged on in a throwaway line about working in a comedy club.  Similarly, Carmen’s descent into drug addiction is handled glibly.  There is simply not time enough in Jose Fernandez’s book to get beneath the surface of their experiences, and this is a shame given the calibre of this talented and energetic cast.  The score, with lyrics by Jacques Levy and music by Steve Margoshes, is also patchy, reaffirming my belief that the show shouldn’t be a musical at all but a play with music that allows us to see the progress the students make in their chosen field of acting, music or dance.

For all that, it’s still an enjoyable watch and it’s easy to be entertained by the performers.  It’s just that I would prefer something with a little more substance regarding the pursuit of fame and the effect of that on young lives.  In this celebrity-obsessed age where anyone can achieve notoriety without a shred of talent, the show could have had a stronger impact. 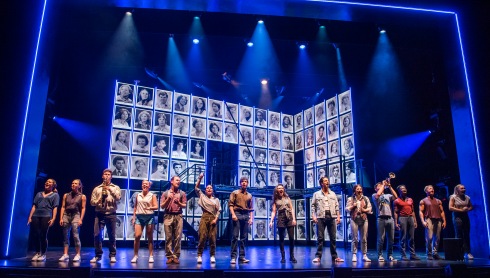 Class acts: the students of FAME