This latest version of the Scottish play by Oddsocks (their third, I believe) has a steampunk aesthetic, making for their best-looking production to date.  The costumes (by Vanessa Anderson and the company) are exquisite: platform boots, long coats and goggles are the order of the day, on a set of riveted steel, cogs, gears and tubes.  It’s a dystopian world of leadership challenges, and therefore ripe for topical comedy along with the trademark Oddsocks silliness and delivery of Shakespeare’s text without too many alterations.

Director Andy Barrow is a northern Macbeth, sounding like Ned Stark – the accent leads to new gags at Shakespeare’s expense.  Barrow is a generous performer and allows the rest of his cast of six to shine in their own way.  Rebecca Little’s Lady Macbeth is powerful and funny, a tiny tyrant with a nice line in vocals and melodramatic posturing – her sleepwalking scene is an utter joy: she plays it relatively straight against the backdrop of general silliness and the interpolation of a Tears For Fears classic number.  Gavin Harrison gives us a toffee-nosed King Duncan and a bungling murderer, while Ben Locke’s Macduff is a cocky, heroic Scot.  Anna Westlake’s Fleance is a bit of a scene-stealer, an emo kid with a dark side, and Oddsocks stalwart Joseph Maudsley gives us the daftest Banquo’s ghost I’ve seen.

The witches are gothic automatons, glitchy and eerie but it’s the scene in which they show Macbeth the apparitions that is when the steampunk theme comes to fruition, with puppet babies suspended in a vacuum tube.  This is Oddsocks creativity and inventiveness at its best.

As tragedies go, this one is relentlessly laugh-out-loud funny.  No detail is overlooked to wring as many laughs out of the audience as possible.  Visual gags supplement the verbal.  Slapstick and silliness underscore some of Shakespeare’s most famous lines.  The violence is cartoony rather than horrific.  The whole thing is absolutely daft but in the cleverest way.  It’s knockabout stuff but it ticks along like clockwork.

Yet again, Andy Barrow delivers a marvel, an evening’s entertainment using an ancient text, even older theatrical traditions and conventions, and yet the result is something that feels absolutely fresh and new.

Oddsocks have been touring such high quality shows for 27 years.  If this latest gem is anything to go by, these punks are showing no signs of running out of steam. 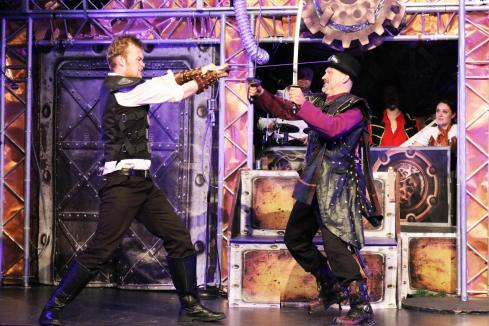