If you’ve got it, flautist

Heritage Opera’s production comes to Stafford Castle for one night only – the grounds are set up for the annual Shakespeare production; this year it’s The Tempest and so there is rather a nautical theme to the design.  Add to this, the reduced size of the orchestra (only seven of them!) and there is a rehearsal feel to this scaled-down sound.  Not that players and singers don’t give their all – and the sound quality is excellent, even with the constant drone of the nearby M6 forever in our ears.

The Tempest set is not a bad fit, given that high priest Sarastro is much like Prospero; the Queen of the Night, Sycorax; and Monostatos is very Caliban-like in this production!  The Three Boys are here replaced by three Spirits – in excellent, imaginative mermaid garb.

Tenor Nicholas Sales is a robust Tamino, the heroic prince and is well-matched with Aimee-Louise Toshney’s princess-in-distress Pamina.  Sarah Helsby Hughes is a strident Queen with a fabulous crown of feathers (I’d been wondering what she does with her daily delivery of birds) while Philip Barton’s Sarastro looks like Matt Berry playing Willy Wonka – but sounds divine.  It’s all about the bass.  The Three Ladies are equally delightful (Heather Heighway, Serenna Wagner, Helen-Anne Gregory) – amazons in straw hats, bringing humour to the action and beauty to the harmonies.  Roger Hanke’s wicked Monostatos is also good fun, a cross between Kermit the Frog and the Creature from the Black Lagoon.  But it is Francis Church’s birdman, Papageno that wins our hearts.  Church makes the best of the sometimes clunky ‘banter’ and his rich baritone is warm and pleasing.

Mozart crammed the show with catchy melodies and beautiful harmonies, with plenty of chances to showcase the main characters.  The Queen hits her top F, Sarastro his bottom one.  Everything that happens in between is aural perfection.  Except when they’re not singing.  The libretto between the musical numbers is hampered by a duff plot (it starts so promisingly with the death of a serpent, and a quest to rescue an abducted princess) riddled with po-faced quasi-masonic blether.  Thank goodness for Francis Church – and for Eleanor Strutt as his intended, Papagena.  Their eventual duet is a joy.

There are moments when the production could do with a bigger sound – the keyboard can’t make up for the absence of brass at key moments – but there are some lovely ideas that add wit to proceedings, like Papageno pushing a pram with an egg in it, and the animals gathering to hear the magical flute are fun if few and far between.

An enjoyable evening of fresh air and Mozart sounding as fresh as ever.  I look forward to more Heritage Opera productions in the future.

Much Fun About Plenty

MUCH ADO ABOUT NOTHING

Shakespeare’s finest and funniest rom-com comes to Stafford Castle in this new production directed by Peter Rowe. While the cast sings music hall songs, we find the set and the setting rather striking. Dawn Allsopp’s elegant stage, with trimmed lawns and a classical pavilion is bedecked with union flag bunting – to celebrate the return of the troops from the War. Behind and above this is the ruined castle, adding to the sense of England gone by (even though the play is nominally set in Messina).

Any Much Ado is only as good as its Beatrice and Benedick. In this one they are a mature couple: imagine Caroline Quentin and Boris Karloff – that’s a bit harsh, perhaps. Philip Bretherton’s Benedick is not so much a silver as an arctic fox and a bit stern, while Sherry Baines’s Beatrice is a little bit matronly. The pair are none the less witty for all this and it makes sense. They have spent their lives avoiding and railing against marriage and only come to find each other late in life: it adds poignancy to Beatrice’s lines about everyone else getting married but her and shows that love can keep us all young at heart.  You can’t help but like them.

Tom Palmer is a tall and dashing Claudio, capricious but not without conviction. He is especially good in the wedding scene and so is his intended Hero (Catherine Lamb). In fact, it’s the best scene of the night: Peter Rowe delivers the surprise and the tension. He could make more of the comic eavesdropping scenes, nicely played though they are. Edward York’s Leonato is delightfully hopeless at deception and yet heart-breaking when denouncing his daughter. Jake Ferretti’s Don Pedro is full of fun, in marked contrast to his whining petulant brother, Don John – the villain of the piece (Jon Trenchard).

Phylip Harries is a Welsh Dogberry and a very funny one. The scene in which he instructs the watchmen is glorious nonsense, a forerunner of the ‘awkward squad’ we still see in pantomimes today – and it’s gratifying to hear Shakespeare’s lines still getting laughs. They could do with another one or two men though, to flesh things out.

This is a satisfying production, not exactly innovative (but then, why tinker just for the sake of it?) and offers much to enjoy.

Using the remains of the castle as a backdrop, the stage nestles into the bailey’s slopes and dips with a simple evocation of the forest and the palace of Theseus.  Elegant pagodas are dotted around, the largest of which serves as a bandstand; as the audience arrive, the Mechanicals treat us to a light-hearted concert of Gilbert & Sullivan numbers.  The setting is Edwardian and a little bit colonial but director Peter Rowe doesn’t labour the point.  By keeping things simple, he allows the comedy of Shakespeare’s script to hold centrestage, proving you don’t need gimmicks and ‘clever’ reinterpretations to make a production accessible and effective.

Quite simply, it’s one of the funniest Dreams I’ve seen in a long while.

The ensemble of four young lovers is intensely presented.  Hilarious when they’re under the influence of Oberon’s love-juice (sic) and rowdy when their passions are aroused, this quartet demonstrate physical comedy that belies the elegance and formality of their period costumes.  Jennifer Greenwood is a fireball of a Hermia, contrasting with Georgina White’s neurotic Helena.  Eamonn O’Dwyer is a poised, slightly stuffy Demetrius but it is Craig Fletcher’s dashing Lysander who gets most of the laughs.

As you’d expect, the Mechanicals are delightful.  An affable bunch directed by Phylip Harries’s Quince, they prepare their production of Pyramus & Thisbe in the woods. Interestingly and very effectively, their version is a cod operetta, continuing the G & S motif.  It works brilliantly, thanks to Greg Palmer’s musical direction and composition.  James Haggie’s Thisbe is a scream, Paul Kissaun’s Lion is adorable (such a contrast between this actor’s Snug the joiner and his Egeus!) but of course, it is Bottom the weaver who dominates.  Eric Potts shows himself to be a wonderful Shakespearean clown, stepping outside his customary role as pantomime dame.  His Bottom is rounded, cheeky and pert.

Simone James is aloof as Hippolyta and graceful as Titania, followed by a troupe of fairies; the otherworldly aspects of the production are simply and stylishly achieved; the overall effect is magical.  Robert Fitch’s Oberon is more commanding than his Theseus, but then the fairy king has mischief to be done.  His servant Puck, for me, steals the show.  Lanre Malaolu gives an excitable Puck, a ball of pent-up energy, a nifty little mover with some fine comic playing.

A dream of a Dream, then.  Already I’m looking forward to hearing about next year’s production. 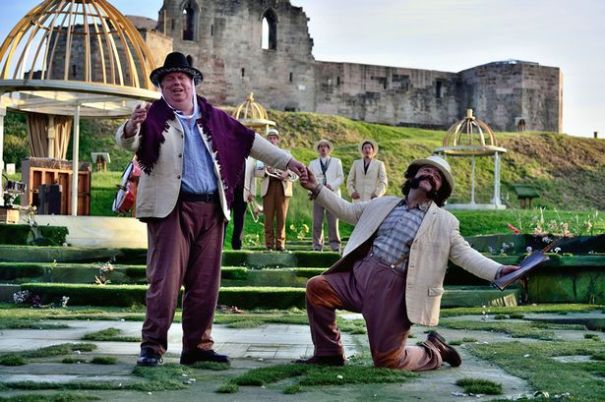 Eric Potts and Phylip Harries indulge in some pre-show operetta