Those closest to us have the potential to hurt us the most and, when they’ve a mind to, know exactly which buttons to press to inflict the most damage.  Family members in particular are armed in this manner – and this is the engine that drives Joshua Harmon’s play, in which members of a Jewish family gather in a studio flat in the aftermath of their grandfather’s funeral.

There is Jonah (Joe Coen) quiet and withdrawn, seeking not to be involved in the spats and sparring.  Visiting is cousin Diana (who prefers to be called Daphna) and the contrast between the two could not be sharper.  Jonah couldn’t get a word in if he wanted to.  Daphna (a steamroller of a performance from Jenna Augen) loves to talk and to carp and to kvetch.  She is particularly vocal in her condemnation of Jonah’s brother Liam, who failed to show up to the funeral.  We dislike Daphna almost instantly; she is relentlessly egocentric and vicious, but Augen imbues her with a spark that makes the character fascinating.  It’s like watching a predator setting its traps – you daren’t take your eyes off her.

When Liam (Ilan Goodman) turns up with his Aryan girlfriend Melody (Gina Bramhill) in tow, the fur begins to fly.  The bone of contention between them is an heirloom to which they each lay claim.  To Daphna, it has religious significance; to Liam its history has a sentimental impact that is a means to an end – he plans to use the beloved trinket as a prop in his proposal of marriage to Melody.

What neither Daphna nor Liam can see (but it is as plain as day to us) is that these warring cousins are exactly alike in their arrogance and selfishness, albeit they occupy opposite ends of the spectrum that indicates adherence to tradition.

Harmon’s script has more barbs than a perimeter fence and is a gift for this quartet of actors.  Director Michael Longhurst handles the crescendos and rests like a maestro.  One of Liam’s rants stops the show, earning Goodman a round of applause.  Otherwise, this is a naturalistic piece; the funny lines come from the characters’ wit, rather than the playwright’s – if that makes sense!

Daphna’s cruelty towards Melody is premium-grade bullying, and seems unwarranted until, in the blistering climax, Melody’s true colours are revealed.

The symbolic power of grandfather’s heirloom is trumped by a final reveal from Jonah.  A ‘bad Jew’ is one who only observes the rules by acknowledging when he has broken one.  Jonah’s tattoo makes him such a ‘bad Jew’ but it also makes one heck of a gesture, which lifts the piece above the level of a debate-cum-slanging match with issues.

A tour de force from all concerned and yes, it is very, very funny. 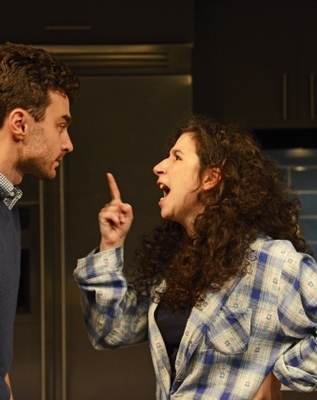 At long last, Urinetown comes to the UK and, let me tell you, it is well worth the wait.   I could write the shortest review ever and just say: PERFECTION.  Or I could go on and on and write a book about how great this show truly is.  I’ll try to land somewhere between the two.

It is set in a dystopian future where a water shortage means bodily functions are strictly regulated.  Everyone has to pay to use public toilets – going elsewhere is strictly prohibited.  Offenders are caught and exiled to the mysterious Urinetown of the title.  Of course, there’s a greedy corporation manipulating and exploiting the situation with politicians and law enforcers in its pay.  Not unlike coalition Britain, ha ha – but the satire of the show is sharper than mine.

When he meets and falls for the corporation boss’s daughter, Bobby Strong embarks on a revolutionary path to restore dignity and socialism to the world.  But the show is about more than a clash of political ideas.  It’s also about musicals, while being a demonstration in how to write and perform a musical.  There’s a lot of frame-breaking fun going on, poking fun at its own form.  Director Jamie Lloyd capitalises on every such moment but the production never becomes too ‘knowing’ or ‘nudge-wink’.  It’s all carried off with camp charm.

Officer Lockstock is our narrator.  Together with Little Sally, who speaks for the audience, he guides us through the show, like a man trapped in the fourth wall.  RSC stalwart Jonathan Slinger is the bully-boy cop and I don’t think he’s ever been better.  Karis Jack’s Little Sally draws our attention to the absurdity and distastefulness of the subject matter, while conveying the character’s blinking innocence.

As Bobby Strong, Richard Fleeshman is certainly swoonworthy, giving us the hero’s blind determination and idealism.  He has a great voice too.  Rosanna Hyland is love interest Hope, fresh-faced and sweet-voiced, she plays the humour of the part to perfection.  Her father, the evil Caldwell B Cladwell is played with relish by Simon Paisley Day.  Marc Elliott is delightfully twitchy and smarmy as Mr McQueen and Adam Pearce is splendid as Lockstock’s partner-in-crime-fighting, Officer Barrel.  Although if Lockstock put his baton to my head to make me pick a favourite, I’d have to opt for Jenna Russell’s hilarious and cartoonish Penelope Pennywise.

It’s an outstanding cast.  An ensemble of energetic minor characters mean there is always plenty going on; some hysterical bits of business make the show consistently funny.  There is also some darkness along the way.  Transgressors are beaten up and bloodied.  We are reminded that there is a serious message to all of this, and it’s not just that capitalism is wrong and that socialism won’t work.  The show reminds us that our way of life is unsustainable.  Without proper management of the world’s resources, we won’t have a world on which to debate ideals, or indeed a pot to piss in.

On the surface it all seems like silliness but Greg Kotis and Mark Hollmann’s show is a remarkable piece of work.  You can see why it won tons of awards on and off Broadway.  The production values of this current incarnation should see some awards winging their way to the St James Theatre or there’s no justice.  Soutra Gilmour’s production design gives us a dank and grimy world of brick walls and tiles, like Victorian toilets and sewers.  Ann Yee’s choreography is quirky and funny, as the score sends up a range of musical styles.  The attention to detail is, like much of the production, breathtaking.

Urinetown is a truly refreshing addition to London’s musical theatre.  Like a long, cool glass of water, it makes you want to go again. 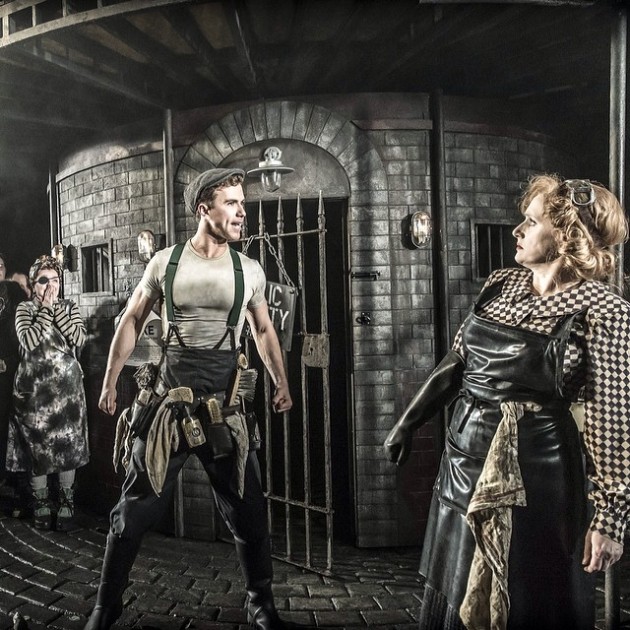 Theatre Royal Bath’s production of Richard Greenberg’s play is enjoying its transfer to the capital – or rather, I should say, the audiences are enjoying it.   This is a cracking production and, try as I might, I cannot find fault with it.  It’s well on course to being my favourite play of the year – quite the accolade, I’m sure you’ll agree!

The plot concerns a mother and daughter who, along with their maid, live across the lake from a resort in the Catskills (It is from this resort that the play takes its title: an ‘American plan’ means the same as ‘full board’ in English money).   They are joined by a young man with whom the daughter is smitten.  Mother has reservations: daughter’s mental stability has led to problems in the past.  Add to this the fact that the young man is not entirely what he pretends, and the scene is set for an engaging drama, along the lines of a Tennessee Williams, albeit transplanted to a more northerly location and handled with a lighter touch.

Diana Quick rules the roost as the mother, Eva, an elegant Jewish momma with a sharp Germanic accent and sharper acuity.  She operates almost entirely in the realm of subtext and invites other characters to do the same.  It’s a very arch, very funny performance and Quick is matched by the rest of this splendid ensemble.  Emily Taaffe is electrifying as Eva’s daughter Lili – at first, the archetypal bored teen, seeking distraction in her imagination but we soon realise there is something else at work here.  Lili’s tall tales lead to problems for handsome Nicky’s relationship with a girl from the resort, and soon he and Lili are ‘involved’.  Luke Allen-Gale is just about perfect as the charismatic and opportunistic Nicky, exuding charm and apparent decency, tackling the tidal changes of Nicky’s fortunes and emotions without losing our goodwill – in fact, such is the quality of every performer, we go along with everything the characters resort to.  As maid Olivia, Dona Croll is quietly long-suffering in a good-humoured way, dignified and with an understated sardonicism that lifts the characterisation out of the stereotype.  Her relationship with Lili has a touch of the Nurse with Juliet; the script has more than a few literary or classical allusions, amid all the coercions and negotiations.

In the second half, a fifth character arrives in the form of Gil (Mark Edel-Hunt); of course Gil is not what he appears and his arrival sets the plot alight and forces Eva to bring all her subtextual skills and manipulations to the fore as she manages the new situation. The intelligence of the writing means the audience is right there with her, reading between the lines and revelling in the delicious irony.

Director David Grindley’s assured handling of the material allows the actors to be subtle, tickling us with feathers rather than sledgehammers of melodrama.  Suitably, Jonathan Fensom’s set and costume designs are also subdued, hinting at place and period in an subtly emblematic manner.

All in all, The American Plan is a feast, an all-you-can-eat theatrical buffet, more than satisfying and very, very tasty. 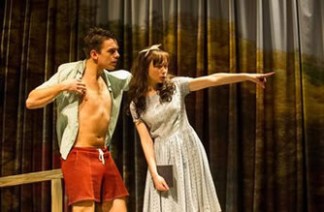