Window on the World

David Hare’s 1995 play gets a well-deserved revival in this robust production in the Crescent’s Ron Barber studio.  Set in the dowdy North London flat of Maths teacher Kyra Hollis (Alice Kennedy) it reveals the story of her past affair with restaurateur and self-made millionaire, Tom (Graeme Braidwood) through reminiscence and recollection as the protagonists are reunited after a separation of three years – during which time Tom’s wife has died.  Guilty feelings abound.  As a friend of the family, Kyra is also missed by Tom’s son Edward (Jacob Williams) who regards her as a big sister.  Edward turns up out of the blue because his dad has become ‘unbearable’, and so begins an eventful night for Kyra…

As the youthful, mercurial Edward, Jacob Williams is a delight, veering between sweet and gauche with ease in a lively performance.   Williams, whose appearances dovetail the main action, makes a lasting impression.

Alice Kennedy’s Kyra is mature (compared with Edward!) but also vulnerable.  We glimpse her classroom manner from time to time and in plain sight is her passion for her vocation, her desire to give the help so desperately needed by society’s most downtrodden.  There is strength here and also nuance.

Much the same can be said for Graeme Braidwood’s Tom.  Opinionated and objectionable, he is also a character of passion.  Yes, we may find his views abhorrent, the way he treats people as objects, but he comes across as a credible figure, thanks to Braidwood’s performance and of course to David Hare’s excellent writing. 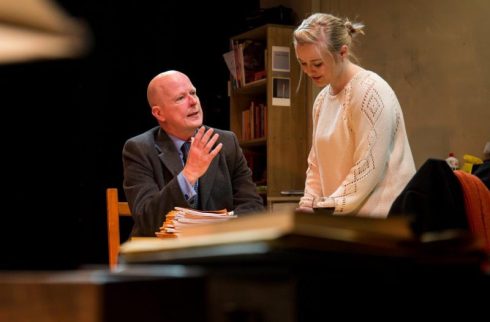 As much a personal ding-dong as a political slanging match, the play emphasises the humanity of its arguments. The characters are rounded, contradictory  and fleshed out beings not mere ciphers to illustrate a point.

Director Mark Payne maintains a level of energy throughout in this emotionally charged drama that is richly laced with humour.  Braidwood’s delivery of Tom’s embittered barbs is impeccable and Williams’s Edward is amusingly observed and endearingly depicted – at least he is able to kick-start his relationship with Kyra again.

As ever, production values at the Crescent are high. Keith Harris’s detailed set with its old furniture and working hob (the smell of onions cooking in real time gets me salivating!) and the props (courtesy of Andrew Lowrie, Ben Pountney and Georgina Evans) show nothing has been overlooked, down to the graffiti on the covers of the exercise books waiting to be marked.

Beautifully played and well paced, this is an engaging, grown-up portrait of relationships as well as a heartfelt discourse on the state of our divided nation.  Surely the divide is wider now, 22 years later – what a depressing thought! – pushing the relevance levels of Skylight through the roof  (I couldn’t resist!).