THE FANTASTIC FOLLIES OF MRS RICH

Written around 1700, Mary Pix’s The Beau Defeated is retitled and repackaged by the RSC in this lively revival, directed by Jo Davies.  The exquisite Sophie Stanton leads as the eponymous widow, a proud shallow social climber with questionable taste – but we can’t help liking her.  She is Hyacinth Bouquet crossed with Edina Monsoon – basically a stock type we recognise from comedies throughout the ages.  Mary Pix populates her play with a host of larger-than-life characters, from Emily Johnstone’s plain-speaking, fast-talking maid Betty to Leo Wringer’s raffish ruffian of a country squire, the elder Clerimont.  Tam Williams is marvellously funny as the foppish Sir John (and he plays a mean trombone!); Sandy Foster’s face-pulling Mrs Trickswell culminates in an hilarious bit of physical comedy when she challenges Mrs Rich to a swordfight; Solomon Israel’s younger Clerimont enjoys wallowing in his misfortunes like a self-indulgent teenager; but almost stealing the show is Sadie Shimmin’s mop-haired, rough and ready landlady Mrs Fidget, plotting with wily manservant Jack (a likeable Will Brown) and knocking back glass after glass of sack.

There is a wealth of things to enjoy in this production, chiefly the superb playing of the cast, but sometimes there’s a reason why plays aren’t staged for centuries.  This one is not without its charms and it rattles and rambles along through subplot after subplot, interrupted by the interpolation of some amusing original songs by Grant Olding., but it offers little we haven’t seen before.  The afore-mentioned swordfight between female characters aside, the play is typical of its kind – Pix was one of a clutch of ‘female wits’ of her time.

Jo Davies keeps a busy stage with servants and even a brace of real live dogs coming and going.  At times, the blocking pulls focus from the main action or just simply masks it from view – and I wasn’t in what you’d call a cheap seat.  It is the gusto of the performers that keeps us interested.  Colin Richmond’s design is gorgeous: paintings of the era form huge backcloths, across which captions are scrawled in hot pink graffiti, and the costumes, as if Poldark was having a going-out-of-business sale, are divine.

Frivolous fun peppered with the occasional knowing epigram, Mrs Rich amuses despite its convolutions and unevenness, with Sophie Stanton storming it while bringing nuance and even subtlety to this figure of ridicule. 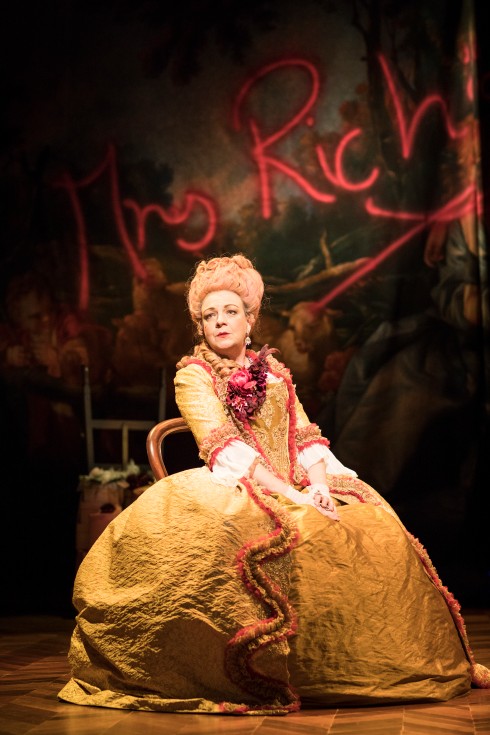