This production of Shakespeare’s A Midsummer Night’s Dream by the ever-excellent Propeller company is stripped down to a running time of just over an hour – the cast is also stripped down to their long johns, to which they add a cloak here or a hat there to enable them to double up on roles.

Robin Goodfellow aka Puck (aka Tam Williams) narrates, providing a nifty spot of exposition to cover scenes that have been mercilessly excised from the text. Gone are Duke Theseus and Queen Hippolyta. Gone too is Hermia’s father, taking with him the darker, more dramatic aspects of the story. Here, director Edward Hall and his co-adapter Roger Warren focus on the entanglements of the romantic comedy, along with the broader slapstick of the ‘rude mechanicals’. It all tears along at breakneck speed and is as slick as it is funny. Which is extremely.

The cast provide their own sound effects and backing music as they hurtle through the plot. Chris Myles is an imperious fairy king Oberon and a bombastic bully Bottom, a ham actor who, had there been any scenery, would have chewed it. Antony Jardine is a dashing Demetrius (well, there’s a lot of dashing around by everyone!) and an affable Peter Quince. Max Hutchinson’s coolly feminine Titania contrasts with his tightly-wound Helena, while Matthew McPherson’s Hermia rants and raves with an abundance of physical exertion. Oliver Wilson’s Snout is a groovy mover, as opposed to his hot-headed and more courtly Lysander. It is Tam Williams’s Robin/Puck that holds the thing together, charming in his tutu and playing a mean trombone.

The comic business is tightly choreographed and cartoonish in places. The attention to detail and the handling of pacing are delightful to behold. The text is clearly delivered, with Shakespeare’s rhyming couplets heightening the fantastic elements of events. The Pyramus and Thisbe performance, which I maintain is the funniest scene in all Shakespeare, is hilariously chaotic. Without the heckling of Duke Theseus and his courtiers, its silliness rattles along uninterrupted.

Aimed at young audiences, this Dream is an engaging, enjoyable, exhausting if not exhaustive introduction to the play, and to Shakespeare. If the reaction of audience members of every age is anything to go by, Propeller delivers a cracking night out for one and all. 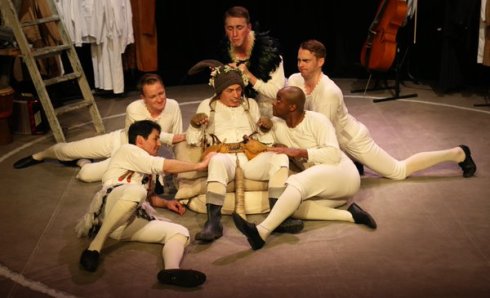