THE STRING QUARTET’S GUIDE TO SEX AND ANXIETY

This new piece from director-creator Calixto Bieito is an exploration of mental illness and sexuality, taking its text from a range of writers, most notably Robert Burton, whose The Anatomy of Melancholy, published in 1621.  In fact, the show begins with an extract from that worthy work, delivered by Miltos Yerolemou, one of the four actors who will appear tonight.  While he orates, the other cast members arrange wooden chairs and set up musical stands, moving slowly and in silence.  The Heath Quartet comes on – they play movements from Ligeti’s second string quartet between monologues; the music is disquieting, unsettling, troubling, underscoring the mental anguishes of the four characters.  Lots of pizzicato, lots of squirling high-pitched strings like you get in horror films.

Yerolemou narrates an account of receiving oral sex from an anonymous woman – we assume prostitute.  Later, Mairead McKinley speaks of giving head to her husband; she is anxious about her technique and reveals she ‘practices in secret’.  Whether we are meant to infer some connection between the two is unclear…  It’s graphic stuff but doesn’t shock those of us who’ve enjoyed the occasional Berkoff.

Nick Harris brings a note of humour to proceedings listing all the pharmaceuticals, the therapies (conventional and alternative) and the alcoholic drinks he has tried to assuage his anxiety.  He discloses he has mastered the art of appearing calm, anxious that people will discover his anxiety – and it’s a salient point: it’s not all sobbing and curling up in a foetal position.  We never know what other people are battling with internally.

About half an hour in, we first hear from Cathy Tyson, in what is the strongest section of the piece.  She recounts a kind of modern-day folk tale about the killing of a child in a road traffic accident.  Tyson’s storytelling is compelling and ultimately moving, as it emerges she is the child’s mother from the tale, and the events must have taken place years – decades – ago.

Annemarie Bulla’s set is deceptively simple, giving a concert hall aesthetic of blond floorboards and stacks of chairs.  These stacks advance and retreat, almost imperceptibly, before crashing to the floor.  And that’s when we realise why this production is staged in the Rep’s main house rather than the studio.

Meanwhile, the Heath Quartet switch to Beethoven’s String Quartet in F Minor, and this is where I run into a problem.  The Ligeti worked as incidental music and an underscore.  The Beethoven is too exquisite and the playing of it is divine.  I am transported by the music and neglect to pay attention to what the actors might be up to.

Interesting, sometimes amusing, sometimes bleak, and sometimes gripping, this Guide gives us examples of suffering but offers little in the way of guidance.  The Anatomy of Melancholy advises us (Be Not Idle; Be Not Solitary) but Bieito keeps his actors largely separate, with very little in the way of interaction.  That said, the simple action of the application of lipstick suggests that even a trauma that has bedevilled someone for decades, can be overcome.

THE ANATOMY OF MELANCHOLY

Doctor Robert Burton’s massive doorstep of a book, first published in 1621, might not seem likely fodder for a stage adaptation.  It’s a lengthy discourse, a treatise and a self-help manual on the subject of Melancholy, but Melancholy For Dummies it most certainly is not.

The excellent Stan’s Cafe gives us more of a theatrical lecture than a piece of drama, touching on the main points of the book, explaining and illustrating the key points in an engaging and interesting show that, though plotless and devoid of dramatic tension, keeps us paying attention by dint of its subject matter and the means of its presentation.

The set consists mainly of a line of wooden easels supporting large pads of paper: Jacobean flip charts! There is a beautiful backdrop, like a woodprint, heralding the first act (or ‘partition’) and there are books stacked just about everywhere.  A desk, a bureau, an armchair… littered with papers and objects.  There is even a skull, a memento mori that adds to the 17th century still-life feel.  Closer inspection reveals some items are out of keeping with the period – this is entirely deliberate, it seems to me, as you realise that more and more of the information delivered is still entirely pertinent to us today.  Some things have changed: we no longer hold to the theory of humours, for example, but the descriptions of human behaviour are still spot on.  The costumes (by Kay Wilton) continue this idea.  Democritus Junior wears the full-length black robe of the cleric or scholar, complete with black cap and white ruff.  The other two men sport doublets over long-sleeved shirts with loose, knee-length hose and stockings.  The female, dressed as male, sports similar attire but there are touches of the modern tracksuit.  It is a subtle touch.  We are anchored in the 21st century and can only take on the Jacobean mindset in an incomplete way.

The cast, each representing one of the four humours and the four elements, split the lecture between them.  This keeps the piece moving.  They illustrate their points with brief vignettes in a rather deadpan comic style.  We get the point; we enjoy the point.  They turn the pages of the flipcharts to show us chapter and sub-chapter headings, and more humorously, snatch up pieces of paper that translate Latin phrases into our vernacular.  Given the small scale of some of these pages and the print upon them, we haven’t a hope of catching them all – it becomes about the gesture, the snatching up of these visual footnotes and paper subtitles.  The quartet operates like a choreographed machine to keep the flipcharts on the right pages – This was the very first public performance and so some changes are smoother than others, but there appear to be contingencies for moments when they interrupt each other or are on the wrong page or fluff their rather wordy and complex lines.  It all adds to the enjoyment.  They grab props from the cluttered desks – it always amuses me to see a packet of crisps being eaten on stage (a personal peccadillo) and we only glimpse some beautiful anatomical illustrations in note books, meticulously created by designer Harry Trow.

The ensemble are of a piece; I can’t single anyone out so I’ll just list them all and praise them for their comic timing, their versatility and their watch-ability – we are in their company for a long, long time.  Gerard Bell is the wise Democritus Junior, Craig Stephens and Graeme Rose are equally funny in their various representations of melancholy and its physical effects – Rose plays a mean lute, accompanying the cast in part-singing and a round.  Rochi Rampal plays male and female – donning a glamorous wig and batting her eyelashes one moment, throwing up snakes and pissing on the carpet the next.

The running time is over three hours.  It doesn’t feel like it although I was a bit too warm in the first half and by the time of the ‘third partition’ my legs were threatening me with DVT.  Even so, three hours is arguably not enough.  The piece is dense with detail and information; you haven’t time to absorb and reflect because they move quickly on to the next point.   Director James Yarker keeps things ticking along so the stage doesn’t become static or tedious.

It is remarkable how much matches present-day thinking on the treatment of depression.  Arguments about diet and the correct amounts of alcohol persist, although I will discount the treatment to ‘procure sleep’ (applying the fat of a dormouse to the soles of the feet)!  On the whole, the piece adds to our awareness of mental health.  It concludes with two instructions, rules to live by if you can: Be Not Solitary and Be Not Idle. 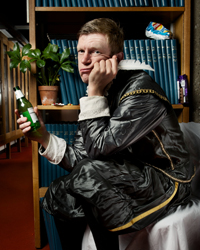