Based on the extremely popular British film, this musical adaptation transplants the action to Buffalo, New Jersey. It’s brash and perhaps a little shallower than the original but the change of location works very well: the issues it covers (the emasculating power of long-term unemployment and the reversal of gender roles and expectations) are universal.  The men’s strip show is not just a money-spinner, it’s a way of reasserting their masculinity.  They’ve been stripped of their traditional role, so they strip off their clothes to remind everyone they are still men.

Terrence McNally’s script follows the familiar story, and there is a lively, jazz-infused rock score with witty lyrics, both by David Yazbek: the band is excellent – flawless, in fact.

Chris Ranger leads as rough and ready Jerry, whose desperation to raise child support leads him to rally his mates to create a troupe of strippers. It’s opening night and Ranger warms into his role – especially his scenes with fat friend Dave (Mark Heath, in a bold performance that brings pathos). Ranger’s voice is well-suited to the score although needs to be a little louder in the mix – Mind you, my seat is practically on the musical director’s head, so it’s not the best position, acoustically speaking.

Stephen Duckham directs his strong cast with an assured hand – it’s the third time he has directed this show and so the attention to detail is spot on. Mary Dunn impresses as Dave’s wife Georgie, with a powerful singing voice and a touching manner. Dane Foxx gives Horse some lovely moves, accentuated by Sally Jolliffe’s choreography, and young Luke Flaherty is effective as Jerry’s son Nathan – who is more mature and level-headed than his dad. Rob Fusco is very good as Harold, trying to hide his joblessness from his big-spending wife (Michelle Worthington, who excels in her musical numbers)

Claire J Smith almost steals the show as chain-smoking, tough-talking piano playing Jeanette (a new character that adds to the Americanisation, and the musicalisation – if that’s a word, of this version) but above and beyond this hard-working and skilful bunch shines the exceptional talent of Mark Walsh, who makes uptight, skittish oddball Malcolm absolutely adorable in a performance of West End quality. He is consistently hilarious without upstaging his scene-mates and when he sings at his mother’s funeral, it breaks your heart. Walsh somehow lifts the whole production without overshadowing the rest of the cast, a feat which is as remarkable as his characterisation.

Funny, touching and still relevant, The Full Monty remains an entertaining piece and BMOS delivers “the goods” on all counts. 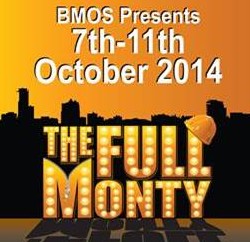