This production from Pilot Theatre comes to the end of its tour at the Belgrade’s B2 studio.  Given its themes, you would think the original short story on which the play is based was written five minutes ago.  The story is astonishingly prescient and no less pertinent having first seen the light of day in 1909.  That’s 1909 not 2009.

We are in a post-apocalyptic future.  Humanity lives underground, each individual in their own room or cell in which they find all their needs fulfilled by the ‘Machine’ that sustains them.  All communication is done via personal screens – in this way, people have contacts the whole world over but they never meet.  Sound familiar?  Kuno (Rohan Nedd) has other ideas.  He believes that humanity has lost something of itself because we no longer interact in person.  He’s not wrong.  He tries to persuade his mother – the woman who gave birth to him, to be more precise – that there is more to life, that the surface isn’t as barren and toxic as the Machine leads everyone to believe.

The woman – Vashti, played by an excellent Ricky Butt – clings to her blinkered views and complete and blind faith in the Machine as a force for good.  She even begins praying to it – in a stark reminder that the divine is manmade.  It is only when it’s too late and the Machine breaks down that Vashti realises what has been lost.

It’s an enthralling piece, rich with ideas both in form and content.  Maria Gray and Adam Slynn are almost ever-present as parts of the Machine, writhing and contorting in grey bodystockings, in a mesmerising display of acrobatics and physicality.  Rhys Jarman’s set consists of a framework that serves as a kind of jungle gym for the Machine parts as well as delineating the limits of the cells.  Tom Smith’s lighting makes superb use of darkness for chilling effect, and Juliet Forster’s direction keeps the action taut, the ideas provocative.  In fact, only the electronic music seems somewhat dated in its presentation of ‘futuristic’ sounds.

Rohan Nedd portrays Kuno’s rebellious drive and evangelism with verve but it is Ricky Bull’s Vashti who has the stronger impact, like a Brexiteer clinging to the wreckage of civilisation and proclaiming all is well.

Neil Duffield’s adaptation reveals the relevance of the original story – unless we regain our relationship with nature, we are doomed.  In these days of unfettered capitalism and climate change denial, the message is urgent and compelling.

And the writer of the original tale, way back in 1909?  None other than E. M. Forster!  He of Room With A View fame and the source of many other Merchant-Ivory films.  This seems as astounding to me as the story itself.  Good on you, E. M! 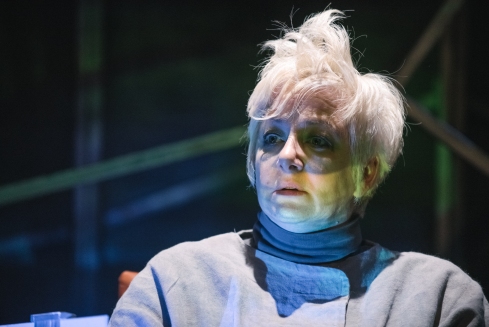 THE SMALLEST SHOW ON EARTH

It is commonplace these days to adapt popular films for the stage, often as musicals. Here the 1957 Ealing Comedy (which starred Peter Sellars and Margaret Rutherford) gets the jukebox musical treatment but all the songs are written by the great Irving Berlin. Standards like Blue Skies and What’ll I Do flesh out the action of this utterly charming period piece.

Struggling screenwriter Matthew Spencer (Haydn Oakley) inherits a cinema in a provincial town. The place is on its uppers, thanks to the underhand tricks of the owners of rival cinema, the Grand. Spencer and his wife Jean (Laura Pitt-Pulford) plan to tart up their picture house in order to get a better offer from the rivals, Albert and Ethel Hardcastle. But the Spencers soon find themselves emotionally attached to the old place and the Hardcastles have a fight on their hands.

It’s all good, clean fun, steeped in the sepia tones of nostalgia and brought to life by a likeable and energetic ensemble. Haydn Oakley is a rich-throated crooner but the superb Laura Pitt-Pulford steals the limelight – her solos are showstoppers and a treat for the ears. Matthew Crowe is delightful as camp solicitor-turned-drag-artiste Robin Carter and Ricky Butt is suitably booable as the snooty and conniving Ethel. Sam O’Rourke’s naïve Tom, a walking encyclopedia of cinematic trivia and the Hardcastles’ lovely daughter Marlene (Christina Bennington) bring the house down with Steppin’ Out With My Baby, in which Lee Proud’s choreography brings to mind the wonderful Gene Kelly.

Director Thom Southerland captures the innocence of the era, delivering a feel-good piece that’s all warm and cosy like slipping into a warm bath.  It’s sweet, funny and charming, an unadulterated delight.  And there’s nothing wrong with that for a great night out at the theatre. You may also read more into it, if you’re that way inclined. The piece reeks of ‘British values’ in the best possible sense: fair play and rooting for the underdog, decency, loyalty and pulling together in the face of underhand tactics and dirty tricks.  The villains of the piece are those who seek to make profits by whatever means they deem necessary – and that’s something worth keeping in mind in these days under a government inebriated by the will to privatise everything they can get their mitts on.