Having only recently ended its West End run of almost a decade, one of my favourite shows comes to town for a week in this exuberant touring production; I am delighted to have the chance to see it again and be tickled by its silliness and comic invention.

This is a show that celebrates theatricality – it wallows in it, in fact, archly satirising its own artificiality while at the same time making us marvel at the skills and cleverness involved to pull off its tricks and stunts. The script is by Patrick Barlow, adapted from an original concept by Simon Corble and Nobby Dimon (I believe I saw the show’s first incarnation many moons ago) but the spark that generated the show is the John Buchan spy thriller as distilled through the cinematic eye of Alfred Hitchcock.  (The show is peppered with references to Hitch’s films, for added laffs).

But you don’t need to know all that in order to enjoy yourself. This is quite simply one of the funniest shows it has ever been my pleasure to witness and, I’m pleased to say, its ability to amuse does not diminish with repeated viewings. The inventiveness of director Maria Aitken is still admirable – the audience gasps at the cheeky breaking of the fourth wall, and the speed at which the ideas keep coming. Part of the enjoyment comes from seeing how the effects are pulled off; another part is appreciation of the performers. The success of each flash of brilliance is dependent on the skill and unflagging energy of the cast of four, a versatile quartet whose verve and comic timing keep the show running like well-oiled, overwound clockwork.

Olivia Greene plays three of the female roles, ranging from a Germanic femme fatale, to a lonely Scottish farmer’s wife, and the platinum blonde love interest Pamela. If anyone says women can’t be funny they have never seen this show (or crawled out from under their rock).

Andrew Hodges and Rob Witcomb work devilishly hard as Man 1 and Man 2 – providing all the other characters, sometimes at the switch of a hat (miraculously, no hats are dropped during the high-speed changes). As a double act or working singly, this pair are breath-takingly good. Broad characterisations, quick changes, vocal dexterity and accomplished physical comedy, these two have them all. In spades. And so does Greene. And so does the man of the match, our hero Richard Hannay – I squealed in excitement to learn that Richard Ede has returned to the role I think he was born to play. Tall and dashing (literally, for the most part) Ede consolidates his status in my view as the funniest man in British theatre. Hardly ever off, Ede hurtles around the stage, jumping from train roof, falling from railway bridge, climbing a cliff face, or just pelting through the Scottish countryside. You can’t take your eyes off him in case you miss a reaction. Utterly charming and relentlessly hilarious, Ede is supported by an equally talented cast – every cog in the clockwork relies on others in order to do its job – and a production that is unerringly laugh-out-loud funny.

Not to be mist! Olivia Greene and Richard Ede (Photo: Dan Tsantilis)

Farnham Maltings theatre company is touring this adaptation of the Jimmy Stewart seasonal classic around village halls in places where other theatre companies rarely go. The object is to provide an opportunity for communities to come together and share an experience. The material is ideally suited for that, with its message of community and fellowship.

Be that as it may, it is the presence of one actor in particular that gets me braving the wilds of Warwickshire: Richard Ede who had knocked my socks off in The 39 Steps plays the Stewart role. His George Bailey is no less compelling; Ede marries the credibility of Jimmy Stewart with the energy of Jim Carrey, in a magnetic performance that wins us over instantly and has us rooting for big-hearted, decent everyman George from the start. Ede makes the part his own but, just as George learns he is not alone, Ede has the support of a trio of other actors who populate the small town of Bedford Falls in a display of versatility and skill. You forget there are only three of them. By changing hats and coats but mainly through voice and carriage, a townful of characters springs to life. Natalia Campbell plays all the female roles as well as George’s guardian angel, while David Matthews and Mick Strobel represent George’s friends, neighbours and adversaries. They are flawless.

The action moves from set to set and through the audience – we are honorary Bedford Fallsians all –and is at turns funny, dramatic and touching. Director Gavin Stride makes the sometimes hokey Americana palatable, and the staging is so well-focussed in this alternative performance space, we are absorbed by and into the narrative. I am even moved to wipe my eyes a couple of times.

Yes, it’s a sentimental fable but it’s effective without being manipulative. Mary Elliott Newton’s faithful adaptation allows us to revisit the familiar material. The story raises the question that’s worth considering: what would the world be like if I had never been born? Think about it: you’ll either feel grateful or perhaps insignificant, as the case may be!

But this time I was struck by the relevance of the message. There is an alternative to the economic system we struggle under today. We should be following the Bailey Bros model rather than the one-man corporation-type profiteering of the piece’s villain, the heartless Mr Potter. Money should be made to work for the common good and not for the super-enrichment of the very few.

The Pursuit of Silliness

Now look here, you chaps: there’s a bally good show doing the rounds at the moment and you could do worse than go and see it. You might be familiar with the original book written by a cove by the name of John Buchan, and you’ll certainly be aware of at least one of the cinematic adaptations, each of which has very little in common with any other.  That’s all by the by.

The story begins with all-round good egg Richard Hannay, feeling a bit out of sorts, don’t you know. It is not long however before he finds himself immersed in a world of espionage and intrigue and, not forgetting, murder, when he encounters a German femme fatale.   Wanted for her murder, Hannay flees north of the border.  The only way he can clear his name, dash it all, is to expose a spy ring and solve the mystery of the thirty-nine steps.

What sets Patrick Barlow’s adaptation apart from (and above) the rest is the manner of its telling.  A hard-working cast of four expend a level of energy that approaches Olympiad proportions to populate the story with dozens after dozens of characters.  This can involve a lot of on-stage quick changes – Tony Bell and Gary Mackay are adept at this, swapping hats and accents without missing a beat.  Mackay also has a nice line in Scottish characters: his landlady is hilarious, and his speaker at a political meeting is astonishing – unheard of, quite literally.  Tony Bell gives us his bad guy (among many others) as the evil Professor.  This pair also give us policemen, newspaper sellers, henchmen, travelling salesmen, and various features of the Highlands landscape.  Charlotte Peters plays the more attractive female roles, including the German fraulein fatale and the romantic interest.  Like Mackay and Bell, Peters demonstrates a range of accents and, above all, a talent for physical comedy.

But the show belongs to Richard Ede as our dashing hero.  In a three-piece tweed suit, sometimes with an overcoat on top of that, he is a dynamo of energy, chucking himself around the stage to create some of the funniest physical comedy you will ever see.  His characterisation is pure charm; he is the affable matinee idol from British films, handsome with his pencil moustache, but above all he is very, very funny.  Of course a lot of the humour comes from Barlow’s clever script, which piles on the silliness in an absence of smut or cheap laughs, but it is Ede who is the driving force in bringing the show to life.

The show lays bare its theatricality.  Doors and windows are wheeled on and off as required.  A chase on the roof of a train is created simply with a couple of packing trunks and some ingenious phyicality. It’s all done for laughs.  Form has precedence over content.  The pursuit of Hannay is the pursuit of silliness.

But the content also bears looking at.  This oft-adapted tale of adventure is obviously an influence on James Bond, but on a more general level, it has the appeal of the great myths.  A hero goes on a quest, defeats evil, and is rewarded with what is important in life.  By rescuing the damsel, Hannay finds love, a wife and children.  We respond to his story subconsciously, perhaps.

Be that as it may, The 39 Steps is a consistently funny, knockabout show, where the thrills come from the theatrical inventiveness. Even though I’ve seen it a couple of times before, it remains fresh and refreshing, reinforcing my view that it is actors who should be at the heart of any performance, rather than technology. 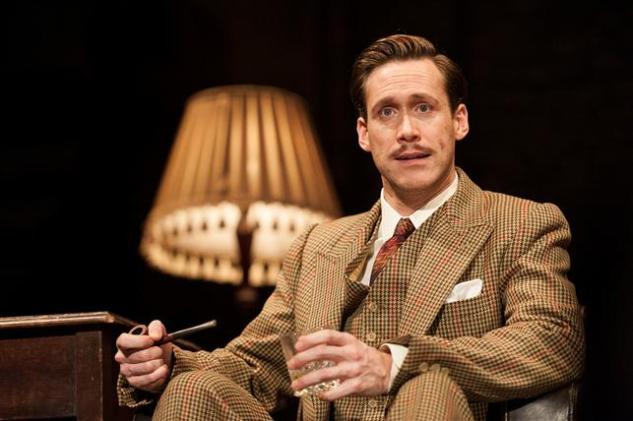