The mother (the Mamma) of all jukebox musicals arrives in Wolverhampton as part of its bid for world domination.  Regular readers will know my views on jukebox musicals but where this one has an advantage is the back catalogue it raids for its score is one of the richest seams of pop music ever written.  Songwriters Benny Andersson and Bjorn Ulvaeus are one of the greatest partnerships of all time and their work is part of the fabric of popular culture.

It’s a double-edged sword.  On the one hand it’s great to hear the songs again; on the other, the songs are so familiar it is difficult to appreciate the context into which they have been thrust.  And so, some songs are shown in a new light (The Name of the Game) while others are rendered meaningless.  Some songs are simply too ‘big’ – most are stories in themselves and feel diminished, shoehorned into the storyline.

Ah, the storyline.  It reminds me of Shirley Conran’s blockbuster, Lace, (Which one of you four bitches is my mother?) but here a young girl seeks a father from three candidates.  She invites them to her wedding in the hope of recognising her dad right away.  It’s this little mystery that motivates the return of the three men, now middle-aged, and their reunion with their former flame, the girl’s mother Donna, who used to sing in some kind of glam rock vocal group.  Spoiler: the identity of the dad isn’t revealed, in a wishy-washy copout.  Now, if one of the guys had been a complete and utter shit, then we would have had some tension.  There would have been some stakes in the unfolding drama.

But everyone’s nice.  Everyone’s an extrovert.  Everyone’s funny.  Everyone is basically the same character.  And it all takes place on a Greek island, flooded with sunshine, and so the Scandinavian introspection and melancholy of the lyrics is mostly swamped.

Lucy May Barker is an appealing Sophie, Donna’s bastard daughter, while Helen Hobson’s Donna (who looks better when she gets out of her Rod, Jane & Freddie dungarees) has the big sings.  She can’t quite pull off the full Agnetha, opting to sing-speak some lines.  As her old chums and backing singers, Rebecca Seale is a lot of fun as Rosie and the elegant, leggy Emma Clifford makes a striking impression as Tanya – a kind of Patsy Stone figure, without the nihilism.

Catherine Johnson’s book keeps things frothy.  We are amused by the antics of these people rather than touched by their plight (such as it is).  Other than as a spectacle, and a chance to sing and clap along, the whole thing is emotionally uninvolving.  Only Slipping Through My Fingers tugs at the heartstrings.

Perhaps I’m missing the point.  It is more fun than I’m perhaps suggesting, and I especially enjoy the staging of the earlier numbers, where choreographer Anthony Van Laast adds a touch of humour (their heads appearing in doorways, for example).  Curiously, the chorus disappear to be replaced by disembodied back-up vocals.

If you want undemanding, feel-good fun, and a chance to revisit some fantastic songs, this is for you.  After all, “Without a song or a dance, what are we?” 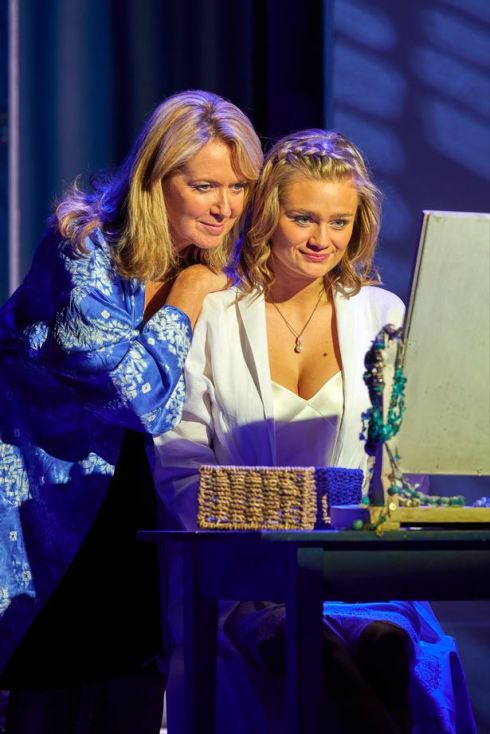