Do we need yet another version of Charles Dickens’s perennial classic?  The RSC and playwright David Edgar think we do, but what can they bring to this well-worn table?  Is there anything fresh to be said?

Yes, quite a bit, as it turns out.

Edgar frames his adaptation around a conversation between Dickens (Nicholas Bishop) and his editor (Beruce Khan).  The latter tries to persuade the former to dress up his social justice tract as a story, because stories are more powerful than facts and figures.  On the spot, Dickens conjures characters and scenes to life, and Bishop and Khan become our narrators as the familiar (to us) story unfolds.  There are some lovely moments of interplay between creator and created as Dickens prompts his characters, they ask what they should do, and especially when the Doctor’s Boy (Luca Saraceni-Gunner) has to run on three times in quick succession.  This approach heightens the storytelling aspect of the play.

Edgar also highlights Dickens’s social conscience by interpolating statistics and vox pops regarding child exploitation and poverty in Birmingham, Edgar’s home town and just up the road from Stratford.  This hammers home the message of the story, and it runs contrary to everything our present government stands for.  On the one hand, it’s startling to see how relevant the story remains; on the other, it’s depressing to realise, what progress we made post-WWII is being reversed.  Workhouses can’t be far away.

Leading the cast is Phil Davis as a magnificent Ebenezer Scrooge.  Davis has an intensity to his meanness and spite – but that intensity doesn’t dim when Scrooge sees the light.  This Scrooge is well-Brexit, despising the poor, spouting racist bile, but if he can be rehabilitated, surely the country’s descent into bitter isolationism can be reversed?  The production gives me hope.

Among an excellent ensemble, I enjoy Joseph Prowen as nephew Fred, who manages to be pleasant and fair without being soppy, and Giles Taylor’s chummy ghost of Jacob Marley.  John Hodgkinson’s benevolent but ailing employer Mr Fezziwig represents the loss of workers’ rights (keenly sought by the Tories of today) – if you think I’m stretching the present-day comparisons, consider the names Edgar gives to some of the minor characters: Snapchat, Tinder and Uber.

But do not fear: the political aspects in no way overshadow the entertainment value of the piece.  There is a lot of fun here and much to enjoy, from Catherine Jayes’s original music, to Natasha Ward’s detailed costumes.  Director Rachel Kavanaugh combines sophistication (the special effects – I especially like the face in the smoke) with simplicity (the extra-slow motion exit of Fezziwig’s party guests, for example) to give us a production that hits a lot of high notes and, I hope, strikes a chord.  The world won’t stop turning, we are reminded, if the rich have a little less and the poor have a little more.

To return to my original question: do we need yet another version of the story?  Yes.  Yes, we do.  More than bloody ever. 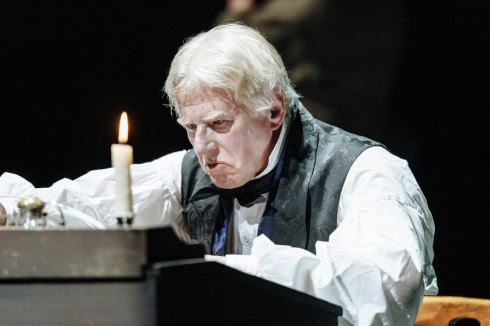