Arch comedy troupe Spymonkey present every onstage death from Shakespeare’s plays in one evening.  A bonkers premise, perhaps, but one which yields surprising results.  The death scenes, taken out of context, afford little possibility of dramatic engagement and so our enjoyment comes from the theatrical forms used throughout the evening.  Everything from puppetry (projected on screen via a live video feed) to contemporary dance is brought in to make for a series of inventive and hilarious scenes.  In fact, it feels like the show is parodying the very medium of theatre, especially its more avant garde aspects.  Certainly the ways Shakespeare is often presented to us come in for a lot of stick.  The through line is the off-stage drama, the relationship problems of the cast members, but that’s not what comes across.  The relentless parade of deaths – silly stabbings and poisonings in abundance – is fun but Shakespeare’s reflections on death and mortality – which tend to come after someone has died – are not given.  We’re keeping things light here – for which I am grateful – but you can’t help thinking of the transience of life, symbolically represented by a rubber fly on a wire!

As ever the performers seem tireless in their versatility.  Aitor Basauri hilariously mangles the blank verse while proving himself an accomplished physical comedian.  Stephan Kreiss brings Teutonic intensity to his clowning.  Petra Massey, a relentlessly funny woman, delights at every turn, while Toby Park adds a touch of melancholy with his marvellously evocative score.

Highlights for me include a joyous Titus Andronicus with a giant mincing machine, the murder of Cinna the poet performed by paper figures on a table top, and Cleopatra’s big production number, complete with dancing asps.  There is darkness here too but whenever the show veers in that direction, the mood is punctured by more silliness.  Director and Adaptor Tim Crouch keeps things tearing along, and the ideas keep coming.  There is cleverness underpinning the madcap mayhem and an anarchistic approach.  Shakespeare stifles creativity, it is claimed – not if this show is anything to go by!

It’s not every night you go to the theatre and see your namesake ‘casually disembowelled’ but there it is: Death Number 4 is one William Stafford in Henry VI Part 2.  And so I experienced a fleeting moment of vicarious fame.  Gutted.

A fabulously hilarious evening of satire and silliness that proves once more the supremacy of Spymonkey’s clowning, informed as it is by an intellectual animus and a celebratory approach to both form and content.

I see you, baby, shaking that asp. Cleopatra (Petra Massey) and her snakes, Aitor Basauri, Stephan Kreiss and Toby Park

NEVER TRY THIS AT HOME

Told By An Idiot and writer Carl Grose’s new play takes an affectionate if irreverent look at the bygone golden age of Saturday morning television for children.  The play takes the format of a retrospective TV programme, “Looking Back (Together)” which dredges up long-cancelled series Shushi (basically TISWAS by another name)  The series was pulled, host Niall Ashdown explains, following the live transmission of some disturbing content – our interest is piqued.  As well as actors in 70s clobber running around spouting silly catchphrases, there is drama here, a dark undercurrent – some of it due to the relationships of the characters and a lot of it stemming from the ethos of the era.  And so, the show’s only female (the always marvellous Petra Massey of Spymonkey renown) is the butt of a lot of the jokes and subject to physical abuse and harassment at the end of a rubber mallet.  Okorie Chukwu plays an ardent fan, invariably picked to be put in the stocks and pelted with pies, his name repeatedly mangled and mocked.  (The cast use their real names but I hope not their real personalities!)

As well as triggering nostalgia for my younger days, the play is very funny, often in that post-modern way of holding up something we (now) regard as offensive, and we laugh, ironically or not as the case may be.  There is also some fun poked at those who pick apart social mores of the past and get offended on behalf of others.  One scene in particular involves a buck-toothed Korean butler and an astounding portrayal of a black woman that takes your breath away (with laughter rather than outrage).  Petra Massey’s vocal skills and comic timing are matched, if not exceeded by her physical comedy.

This is silliness of the highest order, at times exhilarating, at others uncomfortable, but never short of hilarious.  Stephen Harper is Shushi’s lead presenter, cynically going through the motions.  Ged Simmons is the show’s producer, pushing the boundaries.  In a delicious scene, the two phone-in to prank call rival show, Wake Up And Smell The Sunshine, hosted by Petra Massey in a Noel Edmonds beard; the Dionysian excesses of TISWAS pitted against the staid Apollonian order of Swap Shop.  There is a just about perfect Cheggers-a-like by Dudley Rees, who also gives us a cracker of a Frank Carson.  Many of the nods and nudges will be lost on those in the audience with the misfortune of being born too late to have seen these programmes but nevertheless the skits are still extremely funny.

One by one, Niall Ashdown interviews those involved in Shushi, inviting them to look back (together).  These interviews give the play structure but they are also daft and satirical in themselves.  This kind of nostalgic programme over-dramatises the trivial and (“Coming up next week, another crazy gang: the Khmer Rouge!”) trivialises the serious.  Niall Ashdown is more than the show’s straight man or anchor.  He is the contact with the audience, fielding heckles and warming us up.  That the people in the front seats are issued plastic ponchos gives you an idea of how the custard pies and the buckets of water fly around.  One particular pie fight in slow motion is a thing of beauty.   That the scenes are linked with blasts of Eve of Destruction suggests we are witnessing a civilisation in decline.

Sophocles’s tragedy, Oedipus Rex, is one of the greatest works of Drama ever written, but don’t go to a Spymonkey show if it’s tragedy you’re after. Spymonkey is an irreverent company producing some of the most entertaining theatre touring the country today.

The first half is all back story. A crash course in the events that lead up to the action of Sophocles’s play. Narrated by a caryatid, the story of the curse of the house of Laius is played out to hilarious effect through judicious use of brightly coloured wigs and physical comedy. There is a daftness to Spymonkey that calls to mind the sketches of Morecambe & Wise, the surrealism of Reeves & Mortimer and the energy of the Keystone Cops. The pace never lets up but none of the action, the sight gags, the slapstick, ever feels laboured. The characterisations are one-dimensional cartoons – this is theatrical shorthand, a short cut to the laughs. Above all, comedy comes from the sheer theatricality of it all. The set – as versatile as the cast – provides a backdrop but is also incorporated into the silliness. It is almost a fifth member of the troupe.

The second half is, in terms of structure, more recognisably Sophoclean, but where, back in his day the action would be broken up by choric interludes, here we have confessional monologues by cast members, dropping out of character to complain about their ailments, the way they are treated by the others, or to reveal their plans to escape to pastures new as soon as this tour is over. These little moments of darkness are also very funny but they bring to mind the idea that this is not just a knockabout cartoon we’re enjoying, just as the original tragedy is not about distant and lofty figures of mythology. And so another level is added to the performance, along with the ridiculous several-laughs-a-minute style, and the Brechtian moments that puncture and undermine the ongoing show: there is a kind of meta-drama going on with versions of the actors and their personal issues. The main thing though is that all of it is very, very funny in one way or another. I wonder if I can ever go back to the Sophocles without being reminded of Spymonkey’s antics.

Toby Park, managing director of the company and composer, leads as spokesman and narrator. As blind seer Tiresias he suffers ridicule and an extreme form of torture before treating us to a song very much in the early Bowie style, complete with glam rock outfit. Aitor Basauri provides a range of supernumerary characters including Lucky and Plucky a pair of hirsute shepherds, crucial to the plot. But it is as murdered King Laius, a pederast and unicyclist in a blue teddy boy wig that he comes to the fore. As doomed Oedipus, German actor Stephan Kreiss is a force of nature, tearing around the stage, snapping out his lines and all with a bad back and a lunchbox full of painkillers. The best stage actress in Britain (her words not mine) Petra Massey plays Queen Jocasta like a cross between Cleopatra and a character from Battle of the Planets. It is a bizarre design choice but not at all out of place. She also portrays the Sphinx in two equally hilarious versions and her suicide as Jocasta is a coup de theatre that epitomises the production’s inventive and hilarious approach. I fear I am overusing the word ‘hilarious’ but honestly, it‘s the most apt word in the thesaurus to describe this joyous production.

It culminates in a hanging and a blinding, an overblown display using a lot of red ribbon – a device often used by director Emma Rice with her own excellent company, Kneehigh. Even with its script by another Kneehigh stalwart, Carl Grose, this is still unmistakably a Spymonkey show.

The tour continues well into May. I can’t wait to see it again. 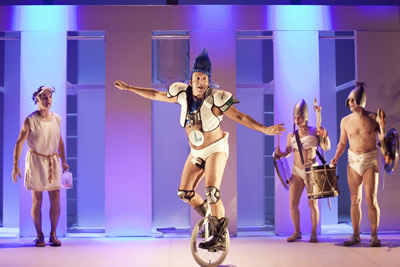