Tag Archives: Over The Top

It’s become quite a tradition at the Belgrade that while the panto is on in the main house, the B2 studio hosts an alternative, something for the grown-ups.  This year, writer Nick Walker chooses the centenary commemorations of the end of the First World War and of the start of the women’s suffrage movement as the basis for this pun-riddled romp.

As ever, the script is jam-packed with groanworthy gags, delivered with the rapidity and subtlety of a machine gun, as it tells the story of four men enlisted to go to the Front to rescue a troupe of actresses.  The cast is entirely female – the reason for which becomes apparent by the end.

Laura Tipper sings sweetly as Bell, and harumphs horribly as Sidebottom, complete with period moustache.  Aimee Powell is dashing as Ashwell, dapper in black tie and tails.  Kimisha Lewis shows her versatility as Flowers, a German, and a balletic Red Baron.  Miriam Grace Edwards is magical as stage magician Mickey… The ladies have several roles each and are well-matched for talent and likeability.

Walker’s clever script has a repeating plot device, taking us back time and again to a music hall, interspersed with scenes of action and espionage reminiscent of a John Buchan.  Director Katy Stephens, a veteran of several of these shows, paces the delivery to perfection.  There is a silent-movie type sequence involving a bomb in a French restaurant that is superb, and a break from the otherwise relentless barrage of bad jokes.  (“Is it snails?” “No, this is a fast food restaurant.”)

It’s not all daftness and running around.  Walker, recognising the solemnity of the occasion, provides a sucker punch ending.  We’ve all seen how Blackadder turned out; here the impact is equally if not more powerful as it is revealed that the characters are all based on real women, and there really was a mission to rescue the actresses.  The final moments commemorate the contributions of women to the war effort and the sacrifices they made, something that many of the events we have seen over the past four years have overlooked.

Delightfully corny, rib-ticklingly daft, and ultimately sobering, this is a solid hour of entertainment with a powerful message. 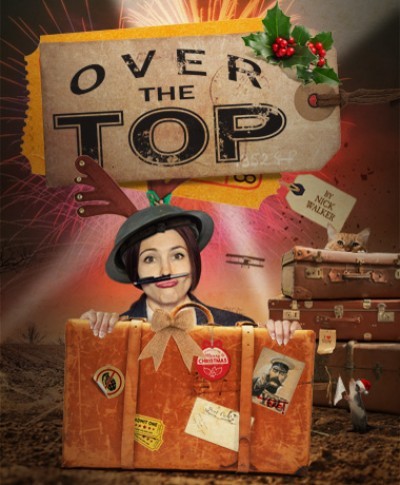