Richard Bean’s hit comedy is served up with gusto by director Mark Payne and his energetic ensemble.  Set in Brighton in 1963, this is a world of gangsters, scrap metal merchants and lawyers, where the height of sophistication is ‘a pub that does food’.

Leading the cast as the hapless Francis Henshall is Damien Dickens, who puts his own stamp on the role, making it less James Corden and more Adrian Chiles.  Dickens has the unenviable task of beating himself up, which he manages with aplomb, and I warm to him as the performance progresses.  He could do with some padding to make more sense of the references to the character’s bulk.

Naomi Jacobs is absolutely perfect as Rachel Crabbe in disguise as her late twin brother Roscoe, and she is matched in brilliance by Shaun Hartman as her love interest, Stanley Stubbins.  This pair are Henshall’s two guvnors and it is from the contrivances of the plot that keep the bosses separate that most of the farce arises.

Graeme Braidwood convinces as patriarch Charlie ‘the Duck’; Hannah Bollard is pitch perfect as Henshall’s love interest Dolly in an arch and assured performance, while Jason Timmington’s declamatory actor Alan Dingle is also enormous value.  Lara Sprosen’s Pauline is winningly dim.  There is strong support from John O’Neill as Lloyd Boateng, Jordan Bird as Gareth, and Brian Wilson as Harry, but the show is almost stolen from the leads by a brutally slapstick performance from Jacob Williams as doddering octogenarian Alfie who bears the brunt of the comic violence.

The set, by Megan Kirwin and Keith Harris, is stylish and functional without being fussy so the cast has plenty of room to run around in.  Vera Dean’s costumes evoke the era effectively – although Harry Dangle’s sleeves could do with turning up!

Payne paces the action to maximise comic effect.  The asides are delivered with pinpoint timing and Bean’s hilarious script, brimming with brilliant lines, is given the energy and punch it needs to make it work.

A splendid production that is laugh-out-loud funny from start to finish, proving there is still plenty of mileage in long-established comic tropes (the play is based on an 18th century Italian piece) and demonstrating yet again the wealth of talent on and off the stage at the Crescent.  I had a boss time. 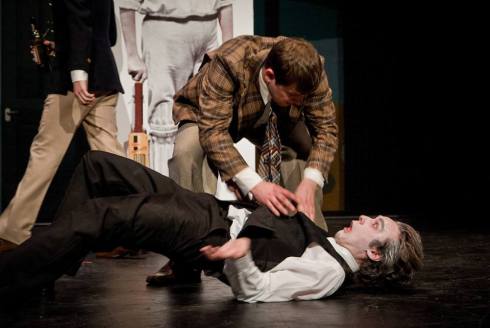 Ever ambitious, the Bear Pit brings to its intimate space Richard Bean’s hit comedy, a knockabout farce based on a much earlier work by Goldoni.  Subtle, it ain’t.

David Mears plays Francis Henshall, the conniving if dim protagonist driven by basic appetites (hunger and desire), striving to keep two employees happy – and apart.  As ever with Mears, it’s a masterclass in comedy.  Characterisation, timing and physicality are all done to perfection, although from time to time, especially in the more intense moments, it’s as though he is channelling James Corden, the originator of the role at the National Theatre.  Given Corden’s phenomenal success in the part, this is no bad thing!

Others in the excellent ensemble also dazzle.  Roger Ganner’s upper class Stanley is a wiz with comic exclamations and comes complete with comedy back hair.  Jack Sargent’s histrionic, wannabe actor, Alan, is an absolute treat, while Flo Hatton’s Pauline makes a delightfully thick ingenue. Natalie Danks-Smith’s Rachel, in disguise as her murdered ‘identical’ twin is also a lot of fun.

For me though, the show is stolen by a towering performance from Ruth Linnett as Dolly, having to tilt her beehive do sharply every time she comes on or goes off – a running gag that never gets old.  Linnett is a match for Mears in the comedy stakes, able to throw away asides to the audience with quickfire precision.

There is strong and enjoyable support from the likes of Mike McClusky as Charlie Clench, Rob Woolton as Lloyd, and Graham Tyrer in dual roles of Harry the brief and Alfie the geriatric waiter.

The laughs come thick and fast – from Bean’s hilarious script, the cast’s larger-than-life, energetic playing, and the attentive eye of director Nicky Cox who doesn’t let a detail pass her by, keeping the action focused and the pace consistent in order to maximise our laughter.

An onstage skiffle trio plays through the leisurely scene transitions – the economic almost Spartan set proves to be versatile in its suggestion of the action’s locations, allowing the actors to come to the fore.  It’s a pity there isn’t more space for the running around, which would crank up Francis’s frenetic activity, but this is a taut production of Bean’s genius with plenty of sauce, relentlessly funny and expertly executed.

The National Theatre’s hit production reaches Wolverhampton for the final week of its tour and the energy levels show no signs of flagging. The emphasis is on laughs and plenty of them in this non-stop cavalcade of comedy in the old-fashioned way, right down to the comic asides that keep us in on the action.

Francis Henshall (Gavin Spokes) has been kicked out of his skiffle band but finds employment as a general factotum to not one but two unsavoury characters in the form of Roscoe Crabbe (really his own twin sister, impersonating her late brother!) and the boyfriend of Roscoe’s twin sister (and also his murderer) Stanley Stubbers. Add to the mix, arranged marriage, large sums of money and a shedload of slapstick, and the stage is set for a riotous couple of hours. It’s farce. It’s commedia dell’arte. It’s seaside postcards and Carry On.

Spokes heads an ebullient cast. The comic timing is flawless. As hapless Henshall, Spokes throws himself into the role, literally – he even beats himself up. But, despite the title, this is not a One Man show. Shaun Williamson is superb as long-suffering patriarch, Charlie ‘the Duck’ Clench, with Jasmyn Banks hilarious as his melodramatically thick daughter, Pauline. A perfectly ridiculous Edward Hancock struts and postures around as wannabe actor Alan Dangle and David Verrey is good value as his lawyer father, Harry Dangle. The two guvnors, Alicia Davies and Patrick Warner, are equally preposterous in their characterisations – this is not a show about nuance. Characters are caricatures at the service of the plot and it’s utterly refreshing to see something so old-school working so well.

Emma Barton’s Dolly brings to mind a Joe Orton creation – in fact, Richard Bean’s wonderful script mines the traditions of British humour from the past three or four centuries. I particularly enjoyed Derek Elroy’s cheery old lag Lloyd Boateng but geriatric waiter Alfie (Michael Dylan) almost steals the show. It is Gavin Spokes who drives the engine, adlibbing with audience members and clearly still enjoying himself after all this time on the road.

Scene changes are covered by skiffle band The Craze (not the Krays, as I thought when I first heard them) but the interludes become increasingly bizarre as the show goes on. We are treated to a xylophone solo and later, someone plays an array of rubber-headed horns. It all adds to the heightened atmosphere of a piece that revels in contrivance and artificiality.

You don’t need to know the play’s heritage (although it’s detailed in the programme) to be able to laugh your face off at this relentlessly funny production. An absolute delight from start to finish. 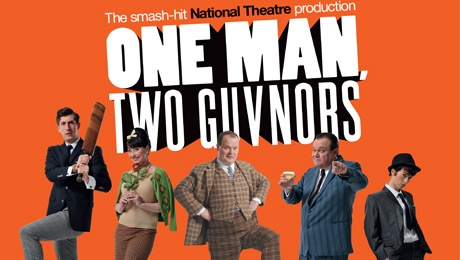 We live in an age of wonders.  Smart phones.  Wireless technology. Instant mashed potato.  And now we have the growing trend for broadcasting theatrical performances to cinema screens all around the country – and indeed the world.

Like any technology, it is marvellous when it works.  The screening of the National Theatre’s hit comedy was marred by a peculiar compression of the cast. On screen they appeared to be like squashed munchkins with elongated noses, fingers and shoes.  The aspect ratio of the screen was all to buggery, as I believe the technical explanation is.   During the interval, I tracked down a member of the cinema staff. He claimed the problem was with the source: it was being broadcast in this distorted manner.  I doubted him completely. It seemed to me more of a local problem – the wrong lens on the projector, but my words carry no weight at Cineworld in Birmingham.   I would be interested to hear from anyone present at a different picturehouse to learn if the problem was widespread.

As a consequence, I didn’t take in much of the opening scene, so distracted was I by this mutation of the actors.  Gradually, I was able to see beyond the distortion and settle back for a very amusing piece of theatre indeed.  You don’t need to know the show’s provenance.  You don’t need to know it is an adaptation of Goldoni’s Servant Of Two Masters from the eighteenth century.  You don’t need to know it draws heavily on commedia dell’arte and Plautus for its characters and plot devices.  I, of course, was as smug as hell to be able to recognise these elements in Richard Bean’s version, which translates the action from Italy to Brighton in 1963.  But then, I can be annoying like that.

The cast oozes excellence with their heightened playing.  There is not a weak moment in the entire show.  I particularly enjoyed Jemima Rooper, playing in drag as her murdered twin brother, and Oliver Chris as her toff boyfriend Stanley, who seemed to utter most of the best lines in the script.   The piece is dominated by James Corden as the hapless man who finds himself with two guvnors.  His Henshall comes across as an affable twat, getting himself into and out of scrapes with considerable skill at physical comedy.  Corden, fashionably disliked on forums like Twitter, won me over but was in danger of being upstaged by a declaiming Daniel Rigby as would-be actor Alan and supporting player Tom Eddon as the deaf and doddering octogenarian waiter.   Director Nicholas Hytner keeps the pace just short of manic and the action is only in danger of losing its grip on the audience when tedious skiffle band The Craze is wheeled on to cover the scene changes.  They outstay their welcome very rapidly – I thought the second act would never get started – but mercifully their duties were taken over in the second half by various cast members doing party pieces.

The advantages of watching live theatre in a cinema include the close-ups and changes of viewpoint that you don’t get in a theatre auditorium, but what you don’t get is a real sense of being present at the event.  Shots of the actual audience enjoying themselves only serve to remind you of the distance between yourself and the performance.   That being said, this delightful, farcical comedy came across really well and I am now keener than ever to see it in the flesh.