Having only recently ended its West End run of almost a decade, one of my favourite shows comes to town for a week in this exuberant touring production; I am delighted to have the chance to see it again and be tickled by its silliness and comic invention.

This is a show that celebrates theatricality – it wallows in it, in fact, archly satirising its own artificiality while at the same time making us marvel at the skills and cleverness involved to pull off its tricks and stunts. The script is by Patrick Barlow, adapted from an original concept by Simon Corble and Nobby Dimon (I believe I saw the show’s first incarnation many moons ago) but the spark that generated the show is the John Buchan spy thriller as distilled through the cinematic eye of Alfred Hitchcock.  (The show is peppered with references to Hitch’s films, for added laffs).

But you don’t need to know all that in order to enjoy yourself. This is quite simply one of the funniest shows it has ever been my pleasure to witness and, I’m pleased to say, its ability to amuse does not diminish with repeated viewings. The inventiveness of director Maria Aitken is still admirable – the audience gasps at the cheeky breaking of the fourth wall, and the speed at which the ideas keep coming. Part of the enjoyment comes from seeing how the effects are pulled off; another part is appreciation of the performers. The success of each flash of brilliance is dependent on the skill and unflagging energy of the cast of four, a versatile quartet whose verve and comic timing keep the show running like well-oiled, overwound clockwork.

Olivia Greene plays three of the female roles, ranging from a Germanic femme fatale, to a lonely Scottish farmer’s wife, and the platinum blonde love interest Pamela. If anyone says women can’t be funny they have never seen this show (or crawled out from under their rock).

Andrew Hodges and Rob Witcomb work devilishly hard as Man 1 and Man 2 – providing all the other characters, sometimes at the switch of a hat (miraculously, no hats are dropped during the high-speed changes). As a double act or working singly, this pair are breath-takingly good. Broad characterisations, quick changes, vocal dexterity and accomplished physical comedy, these two have them all. In spades. And so does Greene. And so does the man of the match, our hero Richard Hannay – I squealed in excitement to learn that Richard Ede has returned to the role I think he was born to play. Tall and dashing (literally, for the most part) Ede consolidates his status in my view as the funniest man in British theatre. Hardly ever off, Ede hurtles around the stage, jumping from train roof, falling from railway bridge, climbing a cliff face, or just pelting through the Scottish countryside. You can’t take your eyes off him in case you miss a reaction. Utterly charming and relentlessly hilarious, Ede is supported by an equally talented cast – every cog in the clockwork relies on others in order to do its job – and a production that is unerringly laugh-out-loud funny. 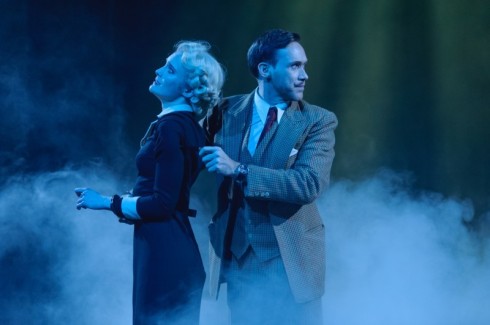 Not to be mist! Olivia Greene and Richard Ede (Photo: Dan Tsantilis)