THE LIEUTENANT OF INISHMORE

This revival of Martin McDonagh’s 1993 play is a showcase for the Oscar-winning writer’s talent and also for leading man Aidan Turner – Ross Poldark himself.  Fans of Poldark flocking to the Noel Coward theatre to be in the presence of the handsome hunk will find very different fare on offer.  The setting is a rustic dwelling (hardly Nampara) in the Irish countryside – instead of Cornish vistas, there is a stylised representation of greenery, a tree that seems almost topographical, painted on a curtain.  Rivalries, betrayals, violence… All of these are heightened for comic effect, and this is a very funny play indeed.  Less Poldark and more Quentin Tarantino does Father Ted or Sam Peckinpah tackling Mrs Brown’s Boys.  The humour is blacker than a pint of Guinness.

The killing of a cat is the trigger for the action.  The puss in question belongs to wild-eyed Padraic (Turner) a freedom-fighter and vigilante, who interrupts his torture of a hapless drug pusher (Brian Martin) to receive news of ‘Wee Thomas’s’ welfare – and it is in these moments we see the character in all his madness, from his matter-of-fact sadism to the sentimental depth of his attachment to his only friend.  Turner is screamingly funny, and while his bloodied white singlet shows off his well-turned arms and shoulders, the character is much to monstrous to be attractive and swoon-worthy.  Turner has a credible intensity to his fanaticism; volatile and yet pragmatic, his Padraic is as scary as he is funny.

The rest of the cast are equally good.  McDonagh doles out the funny lines even-handedly, and each character is touched with a particular madness of his or her own.  Padraic’s dad, Donny (Denis Conway) to whom the care of the cat is entrusted while Padraic is off trying to bomb chip shops, has his otherwise better judgment skewed by drink; young Davey (Chris Walley) a mulleted Motorhead fan who rides a pink bicycle, is the scapegoat for the cat’s demise, gifted with his own brand of logic, founded in idiocy.  The imposing and sinister Christy (Will Irvine) out for vengeance for the eye he lost to Padraic’s crossbow, accompanied by henchmen Joey and Brendan (Julian Moore-Clark and Daryl McCormack) have some darkly funny exchanges – it is Irvine who exudes the most menace, despite our gleeful horror at Padraic’s excesses.  Charlie Murphy’s boyish, cow-blinding Mairead shows how deep the madness infects the population, where adherence to a cause overrides sanity.  She and Padraic seem to share a moral code, centred on a mutual love of cats, and so it is not surprising when they form an alliance.

Christopher Oram’s cosy cottage set throws the decidedly un-cosy conduct of the characters into stark relief.  The gore and violence of the faction are at odds with the chintzy diddly-diddly-dee of Oirish country life.   Director Michael Grandage balances tension with the comedy, ensuring his cast deliver McDonagh’s relentless punchlines with exquisite timing, wringing the laughter from the audience, along with the shocks and the schlock as the action escalates.

Post-peace process, the play is perhaps now a warning of what Ireland could become again, when the lunacy of Brexit kicks in.  More generally, it’s a stark demonstration of the kind of things people will kill and be killed for, with the unlucky black cat as a metaphor for what drives the murderous pursuits of the misguided.  Violence is an answer, the play says, but it’s the wrong answer.

An exhilarating production of one of the funniest plays I’ve seen in a long time.  Hail, McDonagh!  Hail, Turner!  Hail bullets… well, perhaps not that last one.

The premise of John Logan’s new play is ‘what if the boy who inspired Peter Pan and the girl who inspired Alice in Wonderland met as grown-ups in real life?’  Logan gives us an answer to this ‘what if’ but also much more.

Peter Llewellyn Davies (Ben Whishaw) is a delicate man, scruffy in his tweed jacket and shapeless slacks.  He encounters Alice Liddell Hargreaves (Judi Dench) as they wait to take part in a talk or lecture about the books that sprang from their relationships with the authors.

As they wait, they compare experiences, what life has been like linked to their literary counterparts, and it soon becomes apparent there is a hint of Lady Bracknell to old Alice.  Peter stands his ground against her but it is clear he is uncomfortable.  Rather than extending this amusing interaction for the whole of the running time, Logan gives us something more fantastical.  The book-ridden waiting room flies away to reveal a set like a Victorian toy theatre.  Drawn figures inhabit the boxes: recognisable as Tenniel’s interpretations of Lewis Carroll characters; the backdrops bring to mind illustrations by the likes of Arthur Rackham and E. Shepherd.  The stage itself is a chess board of black and white squares.  Peter and Alice reminisce, challenging each other’s recollections, and here the play discusses the nature of memory.  “You’re remembering yourself as you are now,” Old Alice chides Peter, “only smaller.”  Memory is coloured by who we are now, what those past events have made us into.

Through their eyes, we meet the Reverend Charles Dodgson aka Lewis Carroll and J M Barrie.  The writers are portrayed as eccentric, enthusiastic coves, driven by loneliness.  Peter and Alice consider their relationships with the authors.  There is no case of molestation but they conclude it was some form of abuse, forcing a child to navigate a relationship for which that child isn’t ready.  A kind of emotional abuse, then.

The characters themselves appear; Peter flies in and Alice steps up from a door in the floor.  They are the fictionalised, immortal versions of the man and woman who grew up in their shadow.  They catalogue their adult counterparts’ flaws and failings with childlike directness.  Real world Peter and Alice have a love/hate relationship on the characters they inspired.

They discuss growing up and growing old.  It is absolutely fitting that two characters from everyone’s childhood expound on subjects that are universal.   And so the play moves from re-enacted biography and particular tragedy to something that has emotional resonance with everyone.

Peter Pan (Olly Alexander) and Alice in Wonderland (Ruby Bentall) portray the familiar figures with an almost inhuman quality – up against the ‘real world’ characters, they are understandably two-dimensional and flat.  Stefano Braschi is dapper and amusing as the upper class twit who struggles to propose to Judi Dench, and Nicholas Farrell and Derek Riddell bring more than eccentricity and creepiness to the writers Carroll and Barrie respectively in their sentimental attachments to their young muses.

Judi Dench is sublime as the acerbic Alice, putting aside her walking stick to become the very young girl again, shedding the authority and cantankerousness of age for the innocence and curiosity of youth. Her reaction to news of losing two sons in the First World War is heart-rending.

Ben Whishaw also excels as the damaged Peter, a sad and fragile figure, whose cares melt away when he relives happy moments from childhood.  But the loss of his parents and brothers has affected him irrevocably.   He’s the kind of man you want to shake one minute and sit him down and give him a hearty meal the next. Whishaw gives a poignant performance, thoroughly credible and endearing.

Childhood, says Alice, “gives us a bank of happy memories” against the sorrows that come when we are old.  If we’re lucky, old girl.

It’s a wistful rather than nostalgic production.  Melancholy runs through it but there is also plenty of humour in the dialogue and some rather lyrical and reflective passages.  It’s a strong contender for Best New Play in the theatre awards of my imagination.

Christopher Oram’s set design is evocative and entirely appropriate.  Michael Grandage directs with restraint, giving the script room to breathe.  There is, among others, a beautiful staged scene with old Alice as young Alice with Dodgson in his dark room, developing a photographic plate, immortalising her.  It encapsulates, defines and terminates their relationship – every part of the play operates on several levels: past and present seen through the prism of our own memory and affection for the literary characters.

We cannot help but be moved by the fate of the real-life Peter and Alice, and we leave the theatre with our own memories and sense of mortality pricked by this absorbing and rewarding piece of theatre. 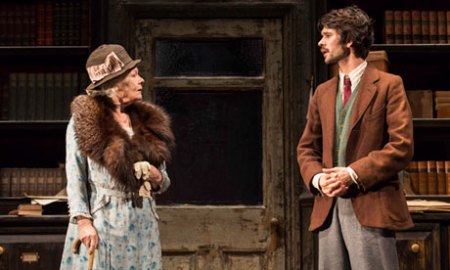