When Serge splashes out 200 grand on a white painting, it becomes a bone of contention and causes a rift between him and his two best friends, Marc and Yvan.  Or rather, it brings to the surface, resentments and feelings hitherto buried, and the 25-year friendship is in danger of exploding.  This welcome revival of Matthew Warchus’s Old Vic production reminds us of how funny Yazmina Reza’s script is, through the prism of Christopher Hampton’s excellent translation.  And so, these three middle-aged Frenchmen and their triangular association becomes a searing statement about the nature of friendship, more than a commentary on contemporary art.

Nigel Havers has never been better, in my view, than he is here as the urbane but uptight Serge.  He is matched by a magnificent Denis Lawson as the scathing, cynical Marc, and an absolutely brilliant Stephen Tompkinson as the emotional, put-upon Yvan.  Tompkinson gets to deliver a lengthy monologue about wedding invitations that is as hilarious as it is long.  In fact, the comic timing of all three is impeccable and it is a joy to see these old hands, excelling at their craft.

Mark Thompson’s sparse but stately set serves as the friends’ apartments, suggesting also a gallery space with its bare walls and low furniture, while Hugh Vanstone’s lighting, with its shadows of a Venetian blind, suggests the supposed surface of Serge’s precious painting.  Snappy asides from the characters are demarcated by sharp lighting changes, accompanied by the jazz-informed tones of Gary Yershon’s ultra-cool music.

It’s a breath-taking hour and a half, of bitter backbiting and savage rejoinders.  An act of selflessness on the part of Serge salvages the trio – they will live to squabble another day – and furthermore, Marc is brought to his own understanding of what the painting signifies.

Like an actor on a stage, the painter covering a canvas is transient.  Serge’s white canvas reminds us we are all figures moving through a space, and then we are gone.  It’s a real punch in the gut from a show that has already made our sides ache with laughter. 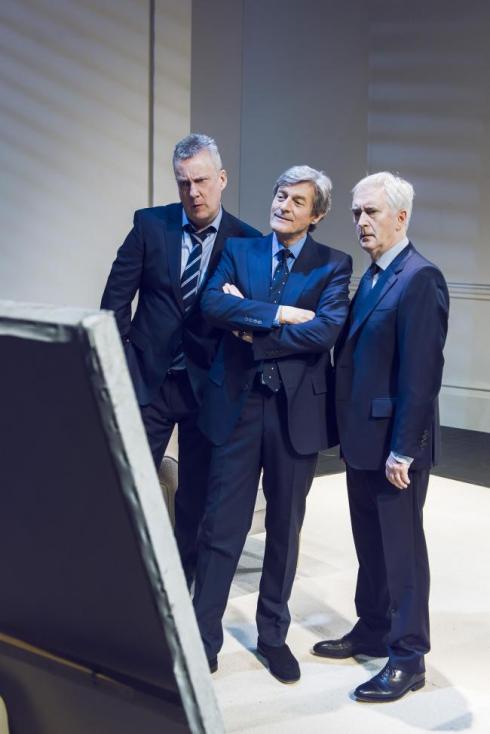 THE IMPORTANCE OF BEING EARNEST

A glance at the cast list for this touring production leads one to think, ungallantly, that they’re all a bit, well, long in the tooth for Oscar Wilde’s comedy about a pair of young Lotharios.  The company is evidently aware of how they will be perceived and so the Wilde play is framed within another play about a bunch of middle class amateur thesps gathering for a rehearsal of The Importance in somebody’s house.  I remember Hinge and Bracket doing something similar yonks ago.

And so, in fits and starts the “Bunbury Players” present the opening act.  In sub-Noises Off fashion things go wrong on and off stage, only here instead of sardines it’s cucumber sandwiches that go astray.  I appreciate why this framing story (written by Simon Brett) might be necessary but it’s excruciating and gets in the way of dear old Oscar’s genius.   Where this production comes alive is when they let Wilde have his head and scenes are performed with vim and gusto uninterrupted by contrived ‘mistakes’.

Nigel Havers is at home in either play as the womanising Dicky who plays Algernon.  It’s the kind of smarm and charm that has become his trademark and there is even a hint of sending himself up.  With Martin Jarvis as a white-haired but nevertheless energetic Jack Worthing (supposedly 29 years old) there is some very funny verbal sparring.  We overlook their advanced years and enjoy the play for itself.

Sian Phillips makes a formidable Lady Bracknell, while Cherie Lunghi convinces as young Gwendolen, up against Christine Kavanagh’s spirited Cecily.  Some of the comic business director Lucy Bailey has them do is a little heavy-handed.  Wilde should be kept frothy but barbed.

After the interval, the ‘interruptions’ no longer trouble us but there remains an abiding sense of tension that at any minute, something ‘hilarious’ will ‘go wrong’ and deflate the delicious soufflé the actors are working hard to create.

Mercifully, it doesn’t and every member of the cast proves there is not only life but talent and ability in this pack of old dogs.  The result is an amusing evening with the biggest laughs going to Wilde’s dazzling epigrams, but I would prefer it if they hadn’t pandered to ageism and just played it ‘straight’.

There are some plays that make you look at life in a new way.  There are plays that move you, surprise you, shock you, amuse you, disgust you, challenge you, puzzle you and thrill you.

And there are some plays that put you off going to the theatre.

This is a new play by Nick Fisher – his first opus for the stage.  And it shows.  I remember his TV series Manchild as being rather enjoyable but here something has gone very wrong. Scenes are constructed like sketches, with punch lines and blackouts.  When characters leave the stage, there is no sense of their lives continuing until they return.  They merely come back to resume the discussion they were having before they left the stage.

Guy (Smarm King Nigel Havers) is summoned by his ex-wife back to the family home because loyal doggy Toby is dying in a basket on the kitchen floor.  The vet (Graham Seed) has advised the mutt be put to sleep by lethal injection, but Miranda (strident voice, bakes muffins in Capri pants and heels) thinks it only fitting that the “shit” she married (her words) gets to say a final goodbye to his loyal friend.   Enter Guy and the rants begin.  He does ten minutes on his aversion to Miranda’s new Aga.  He puts her new French lover’s espadrilles on a baking tray and slams them in one of the Aga’s four ovens.  He tries to ingratiate himself back into her affections with further tirades and some bouts of posh swearing.   He is not a likeable character.  His expressions range from the sardonic and the smarmy to a sort of clenched agitation where he punctuates his invective with jerks of his head as though deflecting invisible footballs into the back of the net.

Mind you, none of the four characters have much to recommend them.  Miranda is cold, dropping references to popular character into her monologues rather than reveal any roundedness to her character.  The vet is so bloody nice and decent you want him to fall on his own lethal syringe.  Guy’s lower class (new money) golf buddy spouts the oratory of the pub boor – he and the vet share a couple of pointless scenes to pad out the running time.

Guy is reluctant to let the vet do his job, but all this is a metaphor for his inability to recognise that his ex-wife’s finally got him out of her system.  He is unable to let go and move on, do you see?

Finally, he realises the poor pooch can’t be allowed to suffer any longer. He pulls out a rifle (he and Pub Boor were on their way for a spot of clay pigeon shooting after golf, don’tcha know?) but can’t bring himself to pull the trigger.   Heaven forbid the shot should ricochet off the Aga.   He decides instead to suffocate the mutt with a carrier bag – HILARIOUSLY a “bag for life”.  But he is too late. Toby has slipped away without human intervention.  Guy is grief-stricken.  Miranda returns to change her heels into more suitable footwear for a head-clearing walk, and enfolds him in an embrace of consolation.  Cue the leer over her shoulder to the audience.  Guy places both hands on her buttocks.  The end.  The audience is at last put out of its misery – except they weren’t.  Some of them sounded like they were enjoying this twaddle.  Were they recognising their own lives on the stage, and enjoying the mockery of themselves?  I don’t think so.  There was none of the archness, wit or subversion of The Importance of Being Earnest.  Perhaps Nigel Havers’s considerable fan base believe he can do no wrong.

When characters refer to each other as “darling” every other line, you know you’re in trouble.  This old-fashioned tiresome tripe should have been tied in a sack weighted with house bricks and flung in the nearest canal.