Oh, What A Beautiful Show!

Having seen this production earlier in the tour, it was an absolute treat to be given the chance to see it again. I loved everything about it the first time and my love is renewed and redoubled to catch it a second time.

Director Rachel Kavanaugh evokes both period and place, sending up, like Hammerstein does, the charmingly parochial attitudes (cf Kansas City) creating a community with its own moral values. She brings out the humour of the script and has her superlative company play it with heart as big as all outdoors.

Unofficial matriarch Aunt Eller rules the roost in a stonking performance by Belinda Lang, hard-boiled with a soft centre. Charlotte Wakefield’s Laurey is feisty and bold, with a sweet but powerful singing voice. From the off, Laurey bickers with cowboy Curly – in a homespun Beatrice and Benedick way – and we know they are made for each other. As for Curly – well – you fall in love with Ashley Day as soon as his voice announces, clear as bell, what kind of morning it is. Day has the matinee idol good looks, the irreverent attitude, heart-on-his-sleeve, good humour. He sings like an angel in a cowboy hat.

A rival for Laurey’s affections, although a non-starter, is live-in farm hand Jud Fry – a towering performance from Nic Greenshields. His operatic bass blends well with Curly’s tenor for the ironic duet, Pore Jud Is Daid.   He is a barely contained mass of menace, a dark presence in this otherwise idyllic land. Kavanaugh balances the comedy with tension: Pore Jud is volatile enough to explode at any second.

Gary Wilmot is in his element as itinerant peddler Ali Hakim, delivering more than ribbons and other fripperies on his rounds. Wilmot’s comic timing is flawless – the jokes and business still play fresh. Lucy May Barker’s Ado Annie, a girl of distractable virtue, is a belter, in terms of selling her big number I Cain’t Say No, and in characterisation. It’s a dream of a cast, supported by an excellent chorus, including great character work from Kara Lane as Gertie Cummings and Simon Anthony, appearing in this performance as Will Parker.

During the interval I hear some purist complaining that the cylindrical hay bales with and on which the cowboys dance come from a later, mechanised age. “They should be haystacks!” he moans, balefully.  I think he’s looking for something to criticise and is clutching at straws.  I’d rather sacrifice agricultural accuracy for theatrical expediency: Drew McOnie’s spectacular and exuberant  choreography would miss those bales terribly.

If you can overlook the hay issue, and most people seem able to, this is a truly wonderful production of a masterpiece, the pinnacle of its genre. Sometimes humanity gets things right and produces a perfect classic. Mozart did it with Don Giovanni, Walt Disney did it with Pinocchio. And Rodgers and Hammerstein did it with Oklahoma! This is popular art that speaks to us on many levels, through solid storytelling and life-affirming values.

The tour has just six weeks left to run. I urge you to catch it if you can. 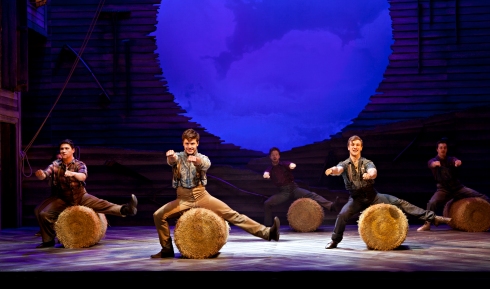 This revival of the Rodgers and Hammerstein classic musical is just about flawless. From the moment the overture begins, you know you’re in for a good time as we’re reminded of the wealth of good tunes that lies ahead. The curtain rises on Francis O’Connor’s rather monochromatic set, all horizontal planks like a big ol’ barn. In fact, instead of the great outdoors and wide open spaces, the set boxes the characters in. They have a restricted world view, out there in the sticks – as evidenced in the song “Kansas City” where even the most basic advancements in technology and infrastructure are greeted as marvels of the modern age. Colour is brought to the production by O’Connor’s evocative costumes and by some beautiful lighting design by Tim Mitchell.

Populating this set is an energetic and lively chorus just brimming with yee-hah spirit. Drew McOnie’s choreography is in keeping with the period (early 1900s), the place (the wild frontier) and seems fresh and original, all at once.

Belinda Lang is Aunt Eller, a crotchety matriarch (all the other females seem to be nubile young women) with a no-nonsense approach and a dry sense of humour. She embodies the pioneer spirit, hard-working, wise and willing to embrace change and challenge. Lang is magnificent in this less-than-glamorous role.

Charlotte Wakefield’s Laurey is sweet and spunky – her bickering scenes and duets with Curly are highlights – of a show that is almost all highlights! Lucy May Barker as the promiscuous Ado Annie delivers a flawless rendition of “I Cain’t Say No!” – her characterisation is both naïve and calculating. James O’Connell is her beau Will Parker, an appealing hunk and an excellent dancer. Their troubled romance is a counterpoint to the main plot, the relationship between Laurey, Curly and brooding farmhand Jud Fry.

Big name casting for this tour is veteran star Gary Wilmot who is ideally cast as itinerant pedlar Ali Hakim. Wilmot has Hakim’s sardonic humour down pat and, of course, can deliver a show tune apparently effortlessly. Value for money, indeed.

But for me, the show is all about Curly. Here, Ashley Day is perfect. Tall, handsome, with a voice to make you swoon, he balances Curly’s cocky humour and his all-out decency. You can’t help falling for him.  In fact, I’d better change the subject or people will say I’m in love.

Director Rachel Kavanaugh delivers comedy and drama, allowing the tones of Rodgers’s score to inform the show’s moods and Hammerstein’s delightful lyrics to come to the fore. There is genuine tension in the climactic knife fight (directed by Christopher D Hunt) – even if you know the outcome already.

This top-quality show has it all, and you can’t help leaving the theatre with a grin on your face and warmth in your heart. This touring production reminds us why the show is a classic – staged and performed by exuberant, irresistible talent. 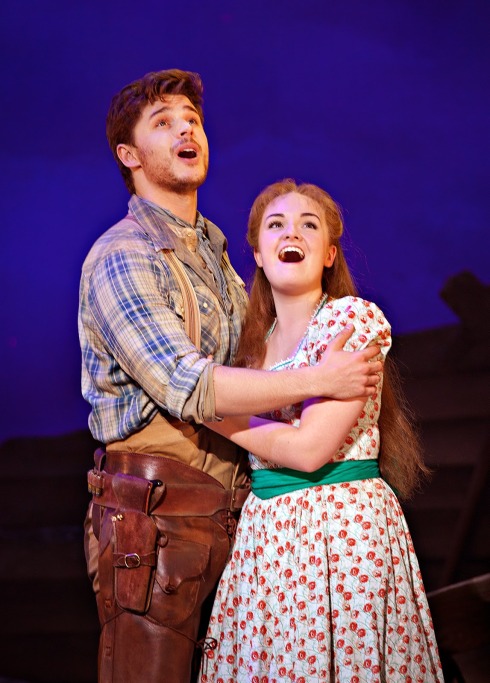 This lesser-known Leonard Bernstein musical from 1953 left me wondering why it isn’t staged more often. Teeming with life, funny characters and catchy melodies, it tells the story of Ruth and Eileen, sisters who leave their home town of Columbus, Ohio to seek their fortunes in New York City. They rent a basement flat in Greenwich Village and are immediately mistaken for a pair of hookers. Eventually, they sort out their employment issues (Ruth as a writer; Eileen as an actor) and their romantic entanglements.

What struck me was the tone of the piece. It is neither saccharine nor salacious. It strikes the perfect balance between sweet and saucy and there is not a trace of cynicism in the entire show. It seems to suggest that the American Dream is dead. New York is full of people whose ambitions and aspirations have been thwarted. This theme is encapsulated by the song What A Waste which tells of writers, artists, musicians, actors who have all found the streets of NYC are not paved with golden opportunities. But, being a musical comedy, it doesn’t leave matters standing like that. If you don’t give up on your hopes and aspirations, and keep plugging away, all will come good. After some confusions and false starts, the sisters achieve their goals and all ends happily.

As Ruth, Connie Fisher establishes herself beyond all doubt as a character actor and more than a rent-a-Maria. She gets the snappiest one-liners and demonstrates an aptitude for physical comedy. Her voice seems to be in a lower register and it suits her. Her scene with a bunch of Brazilian sailors obsessed with dancing the Conga was a definite highlight for me. I can easily imagine her as the next Fanny Brice.

She is matched by Lucy van Gasse as man-magnet Eileen. This blonde soprano charms men merely by existing. Suitors fall over themselves to be near her. Before long, the Irish – sorry, Oirish – contingent of the NYPD are fawning over her – the second act begins with a deliciously funny scene in the cop shop, just one of this show’s many moments that had the audience gasping in delight. Michael Xavier is a dashing Bob Baker with his rich voice and handsome face. Nic Greenshields is sweet as gentle giant Wreck, a footballer in training who has to provide his own cheerleading, and Sevan Stephen’s Bohemian landlord, Mr Appopolous, is a masterclass in comic playing.

Simon Higlett’s massive set is stylish and versatile, The vibrant score is melodious with a jazzy twist – you can detect a hint of West Side Story in the arrangement. These songs deserve to be standards. A Little Bit In Love is perfectly charming. Ohio is wistful, and beautifully harmonised by Fisher and van Gasse. Director Braham Murray keeps the pace swift and the surprises keep coming, but credit is due to the producers who had the good sense to revive this overlooked gem and bring it to a new audience. 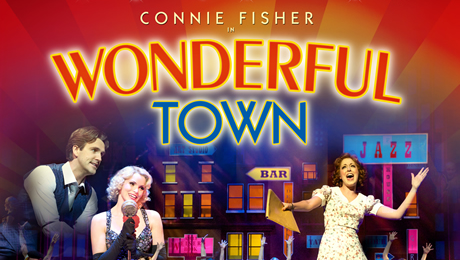