Originally produced at the Globe in 2013, Jessica Swale’s drama charts an academic year in the life of a group of female students at Cambridge’s Girton college.  It’s 1896 and the ladies are there on sufferance, rather than suffrage – their studies will get them nowhere and they are struggling to be awarded the right to graduate.  The fight mirrors the wider campaign for the Vote, and, if the male characters of this piece are anything to go by, they are not a good advertisement for the gender.  The sexism is overt, laid on with a trowel, neatly dividing the cast into heroines and villains.  Where the line is blurred is when female characters such as Miss Welsh decries her Suffragette sisters, and lecturer Mr Banks sides with the ladies.

Colette Nooney is striking as Miss Welsh, imperious and determined, while Jacob Williams’s Banks is a perfect piece of characterisation, from the look to the smallest mannerisms.  They look the part because yet again Stewart Snape’s costumes are spot on.

The Crescent’s Youth Theatre has amassed a strong ensemble, led by Jessica Shannon as Tess, in a remarkably nuanced performance that endears the character to us from the off.  She is supported by Neve Ricketts’s well-travelled Carolyn, Jessica Williams’s forthright Celia, and Charlotte Upton’s Maeve – who has a powerful moment when fetched home by her yokel brother Billy (Tate Wellings).  Holly Mourbey is effective as Miss Blake and there is humour from Laila Abbuq as Minnie the maid.  Jessica Potter makes an impression as strict chaperone Miss Bott.

Of the men, a right bunch of pompous prigs, Julian Southall stands out as Edwards – especially when drunk – and Laurenc Kurbiba makes a suave, caddish Ralph.  Villain of the piece is Charlie McCullum-Cartwright as Lloyd – one can easily imagine the Bullingdon Club adopting him as a mascot.  Jack Purcell-Burrows shines as the decent, gentlemanly Will, but on the whole, we wince, cringe and flinch at the abhorrent attitudes on display.  A dying breed?  I would like to think so.

James David Knapp directs with an assured hand, providing crescendos of high drama among the rituals and routines of college life.  The humour is well-timed and, for the most part, the cast handle the heightened language and stuffy accents with aplomb.  Keith Harris’s attractive set of Gothic arches divided by bookshelves serves to represent both the interior and exterior of the college, while Chris Briggs’s lighting adds to the sense of location and the atmosphere.

A challenging play well-presented, this production of Blue Stockings has legs. 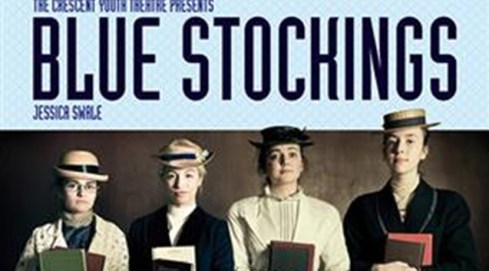