I don’t mind people ‘messing about’ with Shakespeare, being irreverent and what-have-you.  There’s a lot of fun to be had with this type of thing.  Witness the consistently hilarious output of Oddsocks, for example.   Here, Filter Theatre condense Shakespeare’s rom-com into 90 minutes, embellishing it with gags visual and audible and, for the most part, it’s very entertaining.

The bare stage has the air of a rehearsal space.  Actors and musicians in everyday clothes mill around until the show begins.  A man in white shirt and trainers and jeans makes faltering attempts to utter the play’s famous opening line – and we’re off.  It’s like a beat poetry session in Duke Orsino’s court.  Jonathan Broadbent doubles as Sir Andrew Aguecheek, an energetic, acrobatic characterisation, where switches from one role to the other are achieved entirely by a change of stance.

Sarah Belcher is Viola, borrowing a hat and coat from audience members to effect her disguise as a boy.  She gets Viola’s concealed passion across very well, but playing her own twin brother makes it difficult to pull off the siblings’ eventual reunion.  Liz Fitzgibbon is both deadpan and sensual as Olivia but her servant Malvolio (Fergus O’Donnell) is truly startling, stripping down to yellow socks and Rocky Horror golden trunks and strutting around like a Rolling Stones tribute. Natasha Broomfield is a fun-loving Maria (and a cocky Feste) and Geoffrey Lumb’s Toby Belch is the most immersed in his role, the only one in period costume and affecting to be drunk all the time.

Where it works best is when the group’s ideas complement the action.  The jazz music lends an improvised air to the proceedings. You feel anything could happen.  Unfortunately, it does. There are some deliciously funny moments when Shakespeare and Filter are working in tandem.  At other times, the play is overwhelmed and brought to a standstill, when Filter’s anarchic ideas, sometimes self-indulgent, go on (and on) for too long.  Sir Toby and Sir Andrew’s late-night carousing is one example, culminating with half the audience joining them on-stage for a conga while the other half pass around boxes of pizza.  There then follows an inevitable lull as everyone troops back to their seats.  At moments like this, I just wanted them to get on with it.

My companion, unfamiliar with the play, found it difficult to follow the plot and I imagine he wasn’t the only one.  It’s as though the choice of material is irrelevant and the company are going to do what they like with it anyway.  With a bit of editing, and directors Oliver Dimsdale and Ferdy Roberts reining it in a little, Filter’s Twelfth Night could be consistently hilarious and satisfying.  Let Shakespeare have his head and dress him up in all the comic invention you can muster and you can’t go wrong. 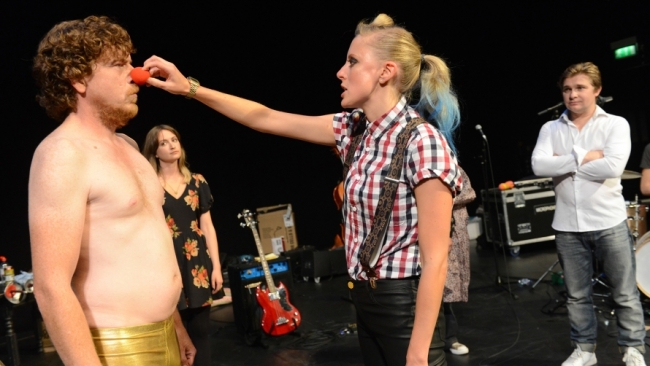