TO SIR WITH LOVE

E R Braithwaite’s autobiographical story covers familiar ground.  It’s not the first tale (and definitely not the last) to deal with an unruly class of kids who are eventually tamed by an unconventional teacher.  There are ups and downs and plenty of respect is earned along the way.  The storyline has become something of a cliché but at least Braithwaite actually lived it.

Set in those first few years of optimism after the end of WW2, the production brings to light many parallels with today’s education system and indeed society beyond.  Headmaster Florian (Matthew Kelly, effortlessly exuding warmth and status) looks forward to some of the more progressive methods of the 60s and 70s – the audience finds itself looking back.  Our incumbent Secretary of State for Education seems hell-bent on a return to the kind of rote-learning and imparting of useless facts against which Florian fights so passionately.  Braithwaite learns the hard way that Florian’s methods and philosophy reap dividends and he blossoms in tandem with his charges.  He’s an unqualified teacher and the play demonstrates very clearly the pitfalls a lack of professional training can bring.  Braithwaite learns that it’s not enough to spout about 19th century art and literature, just because that is what he encountered during his own schooling.

And so the play, rather than evoking nostalgia, stirs us with its relevance.  Outside school, Braithwaite faces racial prejudice and while we can say we have come a long way (the gasps of dismay and shocked laughs from the audience whenever a racist remark is made on stage, for example) there is still prejudice within our supposedly enlightened society, casual and institutionalised.  Look at our government’s approach to immigration, for example, and the myths perpetrated to foster prejudice and ignorance.

As Braithwaite, Ansu Kabia is a dignified presence, keeping a lid on his outrage and exuding humour and warmth.  The scenes he share with Matthew Kelly are particularly strong.  He is supported by a class of unruly teenagers – and it’s pleasing to hear that their accents are in keeping with the period too.  Harriet Ballard’s Monica is funny as a character study as well as for her role in the drama. Mykola Allen leads the resistance as Denham, the toughest nut to crack, and Kerron Darby is equally effective as mixed race Seales.  Paul Kemp spouts most of the unsavoury slurs as old-school (heh!) teacher Weston, who also learns to respect the kids and Braithwaite as people.

The kids dance and jive (lindy-hopping or something like that) through the scene transitions, keeping the energy levels high.  Mike Britton’s set reminds us of the bombings London endured, but also suggests an institution in ruins – by extension, the education system in this country.  Director Mark Babych delivers the heart-warming payoff you expect, keeping mawkishness at bay – that’s the beauty of Ayub Khan Din’s adaptation of Braithwaite’s book: it evokes the era but also reflects our present.  The production satisfies our expectations of this type of story but also has a salient point to make about the nation today. 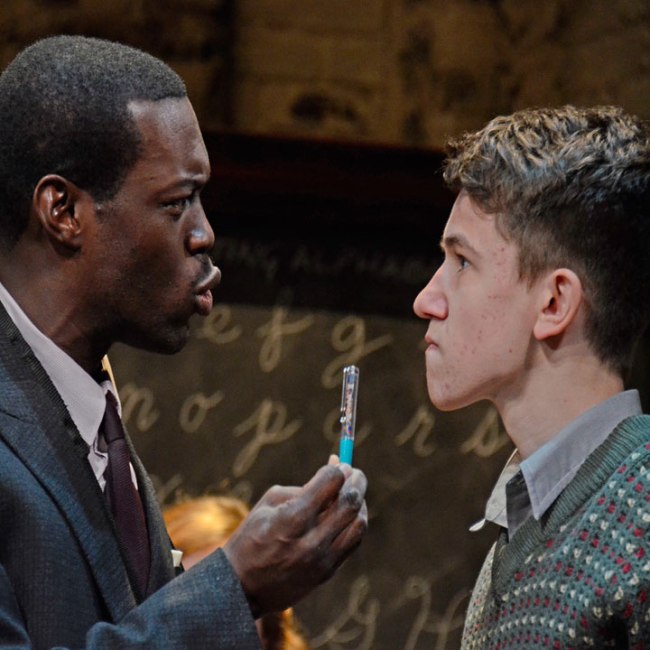 Penned-up aggression: Ansu Kabia and Mykola Allen disagree over an item of stationery